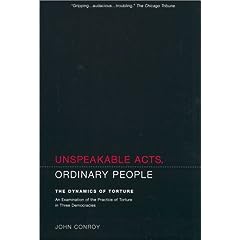 I suppose it seems a little silly to say that reading about torture is difficult. I mean, suffering the experience of torture is difficult. But I am finding that reading about horrific acts of torture, while not quite traumatizing, is really difficult to do. It makes me very tired, as though my body is resisting taking in the information, and I am also finding that I need to take breaks while I read about it.

This post doesn't really have any content other than this, but I feel like it's worth saying, and I wonder if one of the reasons that torture so frequently goes unpunished is because people like me would simply rather not think about it. Certainly it is much easier not to think about the things that governments, state apparatuses, and ordinary people do to human beings.

I guess that isn't much of a positive review of a book, and now when I tell you that John Conroy's Unspeakable Acts, Ordinary People: the Dynamics of Torture - an Examination of the Practice of Torture in Three Democracies is an extraordinarily humane, responsible look at torture practices in three so-called first-world nations, it might sound like faint praise. But Conroy's book is powerful, gripping, and haunting, and if you are interested in the way that violence is used to get so-called intelligence or the ways in which violence is justified in the service of humanity, you should definitely give it a look.
Posted by Aaron C. Thomas at 3:25 PM No comments:

Email ThisBlogThis!Share to TwitterShare to FacebookShare to Pinterest
Labels: violence

This is from What Narcissism Means to Me. It is entitled "Man Carrying Sofa":

Whatever happened to Cindy Morrison, that nice young lesbian?
I heard she moved to the city and got serious.
Traded in her work boots for high heels and a power suit.
Got a health-care plan and an attorney girlfriend.

Myself, I don't want to change.
It's January and I'm still dating my checks November.
I don't want to step through the doorway of the year.
I'm afraid of something falling off behind me.
I'm afraid my own past will start forgetting me.

Now the sunsets are like cranberry sauce
poured over the yellow hills, and yes,
that beauty is so strong it hurts—
it hurts because it isn't personal.

But we look anyway, we sit on our stoops
and stare,—fierce,
like we were tossing down a shot of vodka, straight,
and afterwards, we feel purified and sad and rather Russian.

When David was in town last week,
I made a big show to him of how unhappy I was
because I wanted him to go back and tell Susan
that I was suffering without her—

but then he left and I discovered
I really was miserable
—which made me feel better about myself—
because, after all, I don't want to go through time untouched.

What a great journey this is,
this ordinary life of ants and sandwich wrappers,
of X-rated sunsets and drive-through funerals.

And this particular complex pain inside your chest;
this damaged longing
like a heavy piece of furniture inside you;
you carry it, it burdens you, it drags you down—
then you stop, and rest on top of it.
Posted by Aaron C. Thomas at 1:53 AM 1 comment:

I just figured out how to make titles appear when a visitor scrolls over a photo on my page. This means that I can put mini-reviews on the movie posters on the left hand side that you can see when you put the cursor over the poster. I am excited about this. But obviously way late to the game.
Posted by Aaron C. Thomas at 11:36 AM No comments:

I know I am constantly calling images and movies and narratives racist or homophobic or both. It's a habit of mine; and I'm probably not going to stop any time soon, so just go with me, okay?

Anyway, here's a new one. This is a billboard I have seen two places around Tallahassee so far. I snapped this picture on my way into work the other day: 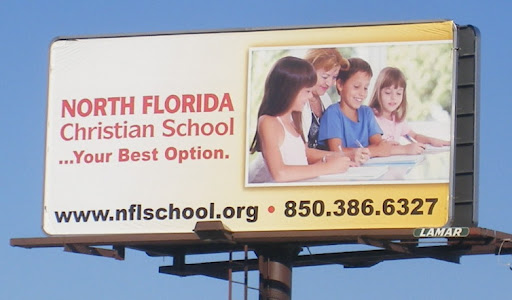 The advertisement isn't hateful outright, of course. A small white boy, who is the focus of the advertisement, appears to be doing some kind of writing project while two white girls, who appear to be in a similar learning environment, look, not at their own assignment, but at the boy's assignment. Their middle-aged white teacher also looks directly at the boy's writing assignment. Everyone in the image appears to being enjoying the scenario. The boy (clever young man that he is) has obviously written or drawn something quite delightful.

From here, I look at the text in the advertisement. What do these happy white people want me to buy? NORTH FLORIDA Christian School ...Your best option. It is here where I start to get a little irritated. The phrase "best option" asks me to immediately imagine options other than the one in the image. And what are those options? Well, in Tallahassee, a city with a white population of 60% and an African-American population of 35%, those options would definitely include a school with at least one black kid, I am guessing. There are two middle schools that are fewer than six blocks away from this billboard and neither of them (OBVIOUSLY) has an all-white population. ...And yet this advertisement seems to say that an all-white education is an option. You don't have to send your kids to those other schools. Send them to our all-white Christian school!

The other element that I want to talk about in this image is the androcentrism of the image. Clearly the boy's education is the focus of this advertisement. The woman and the two girls have their attention focused on the white boy at the image's center. But where are the other boys? For that matter, are there male instructors at this school? The image seems to me—and you may call this a stretch if you like—to be deliberately avoiding any notion of homosociality between both boys and other boys or boys and grown men. What is going on here?

Perhaps it is the too-sensitive gay man in me, but I see heterosexism all over this image. Again, this has to do with the ideas the advertisement itself suggests. "Your best option" asks me what the other options are. And what are the other options? Aside from those options including people of color, they might also include other boys or perhaps male instructors. Instead, the image says that those options are not the "best option." Instead, send your little white boy to our school and we will make sure that he grows up without any other males around him! He will socialize only with women and he will grow up to love them and get married!

It should go without saying that the advertisement is not at all interested in the education of either of the two young women in the image.

I find this advertisement fascinating, even stunning. I suppose it is unremarkable, really, but I feel like I have never been around racism as much as since I have lived in the South. It is really intriguing to me. And I find that almost every time I see an image that strikes me as racist, that image is linked somehow with a privileged heterosexuality. I suppose, after all, racism and homophobia go hand in hand. An attempted sexual control over a population is necessarily and inevitably going to be related to a notion of racial purity. I mean, why else even bother with sexual purity except to keep my family from biologically uniting with that family over there.