I never watch zombie movies, really, so I am a totally uninformed and uneducated person when it comes to approaching World War Z. But I really enjoyed it. 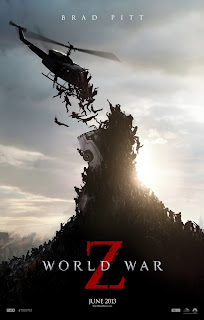 World War Z is a bit of a strange amalgam of a film, really – each act feels very different from the others – but the whole was exciting and, while I would not quite call it suspenseful, the action was fun, the zombies were cool, and the movie was shot beautifully. Frankly, I would go so far as to say that for me the star of the film was Ben Seresin's photography.

In truth, the first thing that must be said about World War Z is that it is basically unrelated to Max Brooks's novel of the same name, a novel which reinvented the zombie genre through its innovative storytelling, and the audiobook of which won an Audie in 2007. The friend of mine who is the most expert in zombie lore called the book "one of the seminal pieces of zombie lit [...]. The book is incredibly harrowing. When you're reading it in a public place and someone sneezes you want to die." So, let's be clear and say that this film is not that.

But... it's exciting. And shot well, and the zombies move both very quickly and rather like a swarm of ants (as you can see in the poster), scrambling on top of one another as though they are basically of one mind, moving at the behest of some kind of interior collective pulse. All of that is fun.

The movie is strangely assembled, though, and we go from save-my-family action sequences in close quarters to James-Bond-style action sequences set in the public streets and airport of a city in Israel to a (really awesome) plane crash sequence to what becomes, finally, a rather standard zombie picture in a medical facility. Oddly enough, this works. World War Z has several very exciting set pieces, excellent special effects, and never has the over-saturated look of a standard Hollywood picture by (say) Jon Favreau, J.J. Abrams, or Joss Whedon. I was into it.
Posted by Aaron C. Thomas at 10:38 AM No comments:

Man of Steel's trailer was awesome. I loved it. But the movie itself is actually absurd.

(My friend Walter reminded me that the trailer for Pearl Harbor was good, too.) 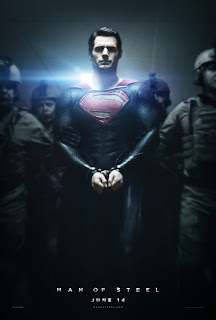 And it isn't just that Superman is rather a boring character (he is) or that the plot doesn't actually get started until at least halfway into the movie. I think it may be that Zack Snyder doesn't really know what he's doing. (Obviously a Michael Bay fan, Snyder one-ups Bay's falling skyscrapers in Transformers 3 by including at least three falling skyscrapers in Man of Steel.) Snyder alternates between explosion-filled setpieces and sententious scenes about "doing the right thing", and this is, basically, all he's got for us. In fact, somehow the movie manages to be about 90% exposition.

The sententiousness is provided by Russell Crowe and Kevin Costner – and more often than not only the sonorous tones of their voices (both fine in the movie, even though their characters are absurdly crafted). The content of this sententiousness is Snyder's usual generic mix of USAmerican patriotism, love of violence, Christian imagery, and pro-militarism. Yay America! Fun game: try to count the number of American flags in Man of Steel. Yay Jesus! Kal-El tells the militarized U.S. government that he is thirty-three years old. Since Henry Cavill was only twenty-nine during filming, it seems a rather blatant reference to the age of Jesus Christ when he was crucified. Yay military power! There are no democratically elected leaders in the movie; only fascist dictators and military leaders. But adolescent Clark, while getting picked on but refusing to punch the bully in the face, is reading (for pleasure, apparently) Plato's Republic. Some people, Man of Steel says, ought to have more power than most. It's okay if someone has a great amount of power as long as it's the right man who has the power. It's okay to break laws made by the majority, as long as you know you are doing the right thing. This is, of course – like Christopher Nolan's The Dark Knight Rises (Nolan was a co-writer on Man of Steel) – an apologia for dictatorship, increased government authority, and (not to be alarmist but) the police state. 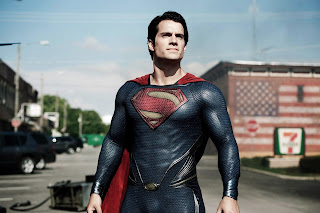 It sounds like what I really object to in Man of Steel is its politics, but it's the movie that is bad: the politics are only incidental. Still, there are lots of cool things in the movie. Because it is setpiece after setpiece, I really didn't get bored until the last half hour of the movie (and I prefer a movie with this much action to a snorer like The Avengers, where I just kept waiting for a setpiece.) The art direction is Alien-inspired and looks really, really cool. If Amy Adams is miscast as Lois Lane (someone with less "pluck" and more gravitas would have been my choice), it was nice to see Clark and Lois as grown-ups as opposed to the teenagers who played the pair in Bryan Singer's Superman reboot from 2006. And Henry Cavill is just... so... pretty. Even more than he was when he was in his early twenties. I mean, his face is perfect. He's not so much sexy as he is adonic.

Still, the movie is almost not worth watching. And that's Zack Snyder's fault. Because while Snyder knows how to blow things up and create a visually enticing setpiece, he simply has no idea how to have any fun.
Posted by Aaron C. Thomas at 11:41 AM 2 comments: 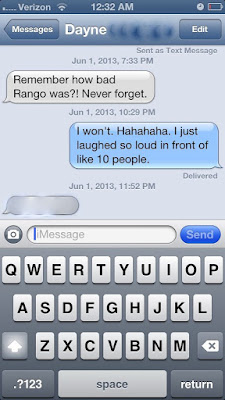