A circle is the only geometric shape defined by its centre. No chicken and egg about it, the centre came first, the circumference follows. The earth, by definition, has a centre. And only the fool that knows it can go wherever he pleases, knowing the centre will hold him down, stop him flying out of orbit.

Oh yes there is a part three of this business (and I'm pretty sure there will be a fourth).

Also, I understand my selection of train movies is arbitrary and rather absurd, but I am kind of enjoying the silliness of this selection. It makes me watch these movies slightly differently, too: like, I am watching for the trains – the way they are powered, the steam they let off, the way the filmmaker shoots the train – it's fun.

Night Train to Munich is a Carol Reed movie (he of The Fallen Idol and The Third Man – both must-see films noir.) I have been wanting to see Night Train since it was recently released by the Criterion Collection. Night Train is a kind of spy movie about World War II made in 1941. Like, this is some seriously current filmmaking.

But, well, Night Train doesn't quite work, really. There is cool stuff in it. Actually, there is quite a lot of cool stuff in it. The film stars a very young Rex Harrison and the soon-to-become-a-matinee-idol Paul Henried. And there is a plot twist early on in the film that I did not see coming at all: I literally gasped when it happened. In truth, the adventure part of the film is sort of fun once we are on the eponymous night train headed for Munich.

But Night Train is a sort of spy comedy: one of those pictures that has lengthy sequences with comedic characters who – it will turn out in the end – are integral to the plot, but make the film rather silly instead of action-packed or thrilling. This is part of Night Train's charms, or is supposed to be, but I wasn't having it. I wanted train action and intrigue. Instead, this movie has a wisecracking comedian foil the Nazis. And, well, the Nazis had a lot of problems, but I don't think they could have exactly been foiled by a string of good jokes. (This is an ethical question for the filmmaker, too, but I will leave that to the side.)

My other train film was the MGM musical from 1946, The Harvey Girls, which was more of a train movie than I thought it was going to be. The film stars Judy Garland, Angela Lansbury, and John Hodiak. The big number for the movie is called "On the Atchison, Topeka and Santa Fe" and much of the film takes place on the trains between Ohio and Arizona or somewhere out west. Actually I have already forgotten.

The Harvey Girls is not exactly a great MGM musical. It's not terrible by any means, but I had a lot of trouble figuring out who was who in the actual plot. The side characters are all introduced awkwardly and (this is the most awkward part) the girls all look exactly alike. I couldn't tell them apart, honestly. I felt like my friend Wahima when she says that white people all look the same. These girls really do all look the same. And I guess this makes a sort of sense; they are all "Harvey Girls" after all. It is a type.

Actually, the real trouble with The Harvey Girls is the songs. "On the Atchison, Topeka and Santa Fe" won an Academy Award, and it is memorable, certainly, but most of the songs in this film are totally forgettable. Others may disagree, but I felt myself rather bored by the musical sections in the film, whereas I sort of found the plot and the acting delightful. Part of this has to do with the inimitable Angela Lansbury as a kind of Mae West character in flamboyant showgirl drag (although it sounded to me like they dubbed her singing voice for some reason.) Anyway, if you like old movie musicals you've actually probably already seen this one, and if you don't like movie musicals, I can recommend about 20 others that you should rent before you get to The Harvey Girls.

Judy Garland – it needs to be said – was obviously fabulous in the movie.
Posted by Aaron C. Thomas at 2:00 AM 3 comments:

Misreading of the Day 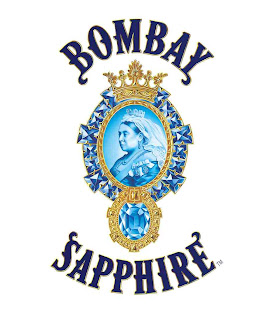 As I went to make coffee this morning, my eye caught the word sapphire on the bottle of gin I keep on my counter (I have one of the giant Costco-sized bottles / I drink a lot of gin / moving on) and I misread the word sapphire as salpêtrière.

Either I've been reading too much Freud or too much Foucault. Possibly both.
Posted by Aaron C. Thomas at 11:49 AM 2 comments:

So, as I am watching train movies, lately – there will (at least) be a part 3 of this post – I thought I would finally watch John Frankenheimer's 1964 picture The Train. I was cool with it. It is ostensibly an action movie (most of these train movies are), but The Train is also trying to be a picture about "doing the right thing" and "the value of art to the nation" and other things I care a lot less about.

But don't get me wrong; this is a really exciting picture. Frankenheimer doesn't have the reputation he does for no reason. There are some awesome explosions and very cool train crashes. There is also a really, really exciting sequence where the people on the train and the people in the French resistance in local towns all trick the Nazis who are riding on the train. In other words when it is an action movie, it is exciting action movie. The down-time is less interesting. (Do I say that about every action movie? Pretty much; yeah.)

One more thing: Jeanne Moreau is in this, and goddammit I love her. She is not the largest part, but she is riveting for every moment she is onscreen.

And now here's where you start to think I am a crazy person. I also watched Danny DeVito's 1987 film Throw Momma from the Train, which is a kind of comic adaptation (perhaps a spoof) of Hitchcock's masterpiece Strangers on a Train. DeVito directed this comedy and Billy Crystal is the star. And Anne Ramsey got an Academy Award nomination for playing DeVito's hateful, shrill, mustachioed mother. (A nomination that I completely fail to understand. She just screams and looks ugly. Wash your hair!)

I was never into these Billy Crystal comedies – City Slickers, Mr. Saturday Night, etc. – they all are geared toward these life lessons that we're supposed to learn. You know: the importance of friendship and get out of the city and back to nature and family is all that matters. I hate that kind of stuff, mostly because I don't believe any of it. But the real cardinal sin of these films, of course, is that they aren't funny. I mean, this is a problem, guys. (I've posted about this before, so I will shut up about it now.)

There are, sadly, not really a lot of trains in the movie, either, although they are a kind of motif that runs through the whole film.

Okay, one more thing, and it was 1987 so I deserve a break for this, but I kinda thought Billy Crystal was hot in Throw Momma from the Train. Seriously. I mean, it isn't a reason to watch the movie or anything like that, but he really is kinda sexy.
Posted by Aaron C. Thomas at 12:16 PM 3 comments:

I don't know what got into me, but I watched Unstoppable, last year's Tony Scott film, and I liked it so much that I thought perhaps I would rent a couple of other train movies. I mean, there are quite a few famous ones – Sidney Lumet's Murder on the Orient Express comes immediately to mind – but, as I don't really re-watch movies, I thought I would check out a couple that I hadn't seen.

The thing that is great about Unstoppable is that it is, basically, a thrill a minute. The acting is passable, the storyline is highly improbable, and the whole thing has this very serious tone. It was also obviously written by the typical Hollywood writer who can't think of a more interesting villain than a big-business hatchet man whose main motive is "corporate greed" in the abstract. But I thought the whole thing was just so exciting. I mean, a train is barreling through Pennsylvania at like eighty-five miles an hour running into shit or nearly running into shit. I had a great time.

I watched Runaway Train, the Andrei Konchalovsky film with Jon Voight and Eric Roberts because I had thought that Unstoppable was based on this 1985 flick. Not so, it turns out. Runaway Train is a much smarter, much more 1970s-style film with an anti-hero in the Gene Hackman vein (I'm thinking of The Conversation and The French Connection). Runaway Train is about a prison breakout in Alaska. Jon Voight and Eric Roberts break out of the prison, sneak through the sewer system and get out to a trainyard somehow. After they get on the train, the drama really starts. This one doesn't have the suspenseful big-movie qualities that Unstoppable does, but it is not a film about trains crashing into shit like Unstoppable is.

Instead, Runaway Train is a film with an interesting ethical center, a movie interested in ethical conundrums and the essential humanity of the incarcerated. I was really into it, and since Runaway Train takes place on a train going ninety-five miles an hour, it's hard for it not to be suspenseful. Runaway Train also has an absolutely great ending, and you know how I love a great ending.

More train films to come. I'm just getting warmed up.
Posted by Aaron C. Thomas at 2:19 AM 4 comments:

I don't usually post about what I did today anymore. I am tending, these days, to want to talk about what I thought today instead. This weekend, though, has been a weekend of activities more than it has been one of consideration.

On Friday night, after teaching my play-analysis students about Bourdieu's theory of the field of cultural production (discussion of which went absolutely swimmingly), I headed over to one of the tracks on campus to participate in FSU's Relay for Life for 2011. It was amazing. We were up all night walking the track and raising money for cancer research. It felt like a very college thing to do... the kind of thing we didn't have at the university I attended for my baccalaureate degree. I had an absolutely great time, my hips and feet have been sore since, and I haven't been able to fall asleep before 3.00a for the last two days.

Then today, my friend Kalon and a whole bunch of our friends got together for our own version of Epic Meal Time (we are obsessed with them). 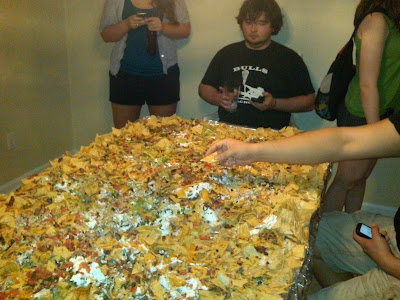 I cannot even begin to pretend that any of this was logical or provide any explanation that makes any kind of sense. But it was exhilarating.
Posted by Aaron C. Thomas at 2:24 AM No comments: