Don't confuse The Wolverine with X-men Origins: Wolverine, although, well, I guess it wouldn't matter too much if you did.

I insist on seeing these X-men movies, and I am not really sure why. I guess it is out of queer solidarity. Mutant powers are an obvious (and useful) metaphor for deviant sexuality, certainly, and then there are all of the gay people in the movies. Which is fun. But most of these X-men movies have, frankly, not been very good, so I am not sure why I am as loyal as I am to the franchise. In any case, I couldn't bring myself actually to see The Wolverine in the theatre when it was out, but now that Oscar season is over, I rented The Wolverine. Oh yeah, and this isn't the sequel either to the 2009 Origins: Wolverine film or the 2011 X-men: First Class. This movie is a follow-up to X-men: the Last Stand (i.e. X-men 3), which came out 7 years ago. I, frankly, couldn't remember anything that happened, but apparently I saw it back in 2006 because I blogged about it back then.

This movie is bad. Honestly, though, I still kinda liked it. First off, this film takes place in Japan and is filled with every single movie cliché that Hollywood has ever churned out about the "land of the rising sun" and about Japanese people in general. These include:
We even got the biggest Hollywood cliché of them all in films about Japan at the end. As he finally kills the bad guy for good, Hugh Jackman looks into the villain's eyes and says: Sayonara. Boom.

But there are a lot of good things, too: the villain is really cool. Actually, she is the hot blonde chic that exists in all Hollywood films about Japan. (There is always a hot, evil, blonde chick with whom we can contrast the naive, docile, but incredibly gorgeous Japanese woman, with whom the hero is supposed to fall in love.) But anyway, this blond villain, whose name is VENOM, is really cool.

And Hugh Jackman is shirtless a lot, and he looks amazing. In fact, Hugh Jackman is shirtless so much that I started to wonder who this film's intended audience is. I mean, it is filmed like a silly movie for teenage boys (the violence is almost egregiously fake and cartoonish), but this film loves Hugh Jackman's body, and there is an extended sequence with a sexy Japanese guy in his underwear, too, and I couldn't really figure out why. Not that I'm complaining.

What else? I guess there isn't much else to say. We learn almost nothing about Logan or his origin, of course, and the acting is pretty terrible across the board except for the excellent Hiroyuki Sanada and a really great performance by Ken Yamamura.

Basically, this is for Hugh Jackman fans but pretty much nobody else. I take that back. Honestly, I'm not much of a Jackman fan, but I sure am a fan of his upper body. Woof.
Posted by Aaron C. Thomas at 4:57 PM 2 comments:

I expect this to win as a sort of consensus choice. It is imaginative enough and inoffensive, and it taps into one of the Academy's favorite feelings: nostalgia. The film is nothing special, really, but it is fun, and charming in its way. Honestly, I have to admit to being slightly disturbed by the cartoon violence in this movie – this doesn't seem to have bothered too many people, but the violence that is perpetrated on the Peg Leg Pete character is done senselessly and in a troubling way. Peg Leg Pete is thrown around, stabbed, electrocuted, and sodomized by a pitchfork. He is obviously a violent character himself, intent on doing something to Minnie Mouse (is rape implied?), but the revenge taken by Mickey and co. doesn't seem warranted.
Will Win: Animated Short Film
Could Win: N/A
My Rating: Not ranked 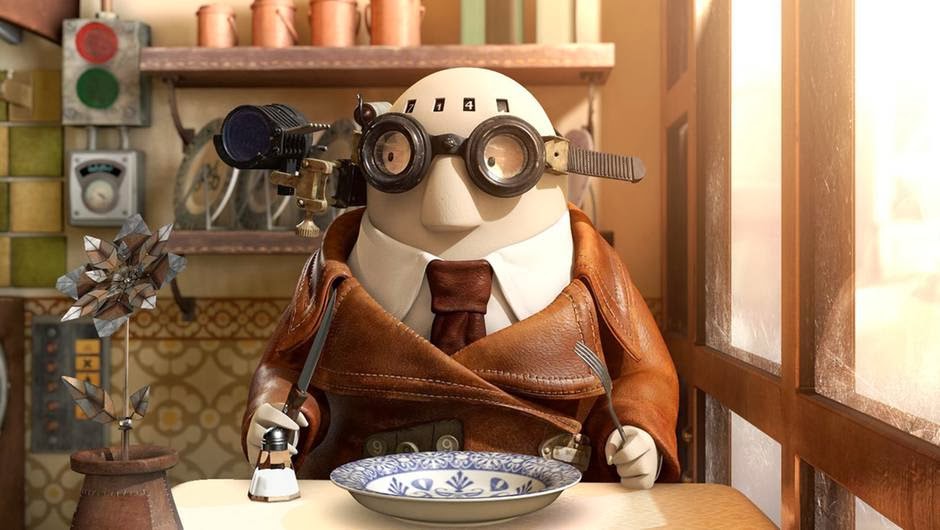 This is, I think, the most charming of the nominees. In a strange, dystopian, robot-populated future an introverted accountant with OCD (OCD is always charming at the movies, isn't it?) adopts a stray robot dog and develops a relationship with it. The animation is gorgeous, the story is charming, and the character design is impeccable. The film also has some really good jokes.
Will Win: N/A
Could Win: Animated Short Film
My Rating: Not ranked 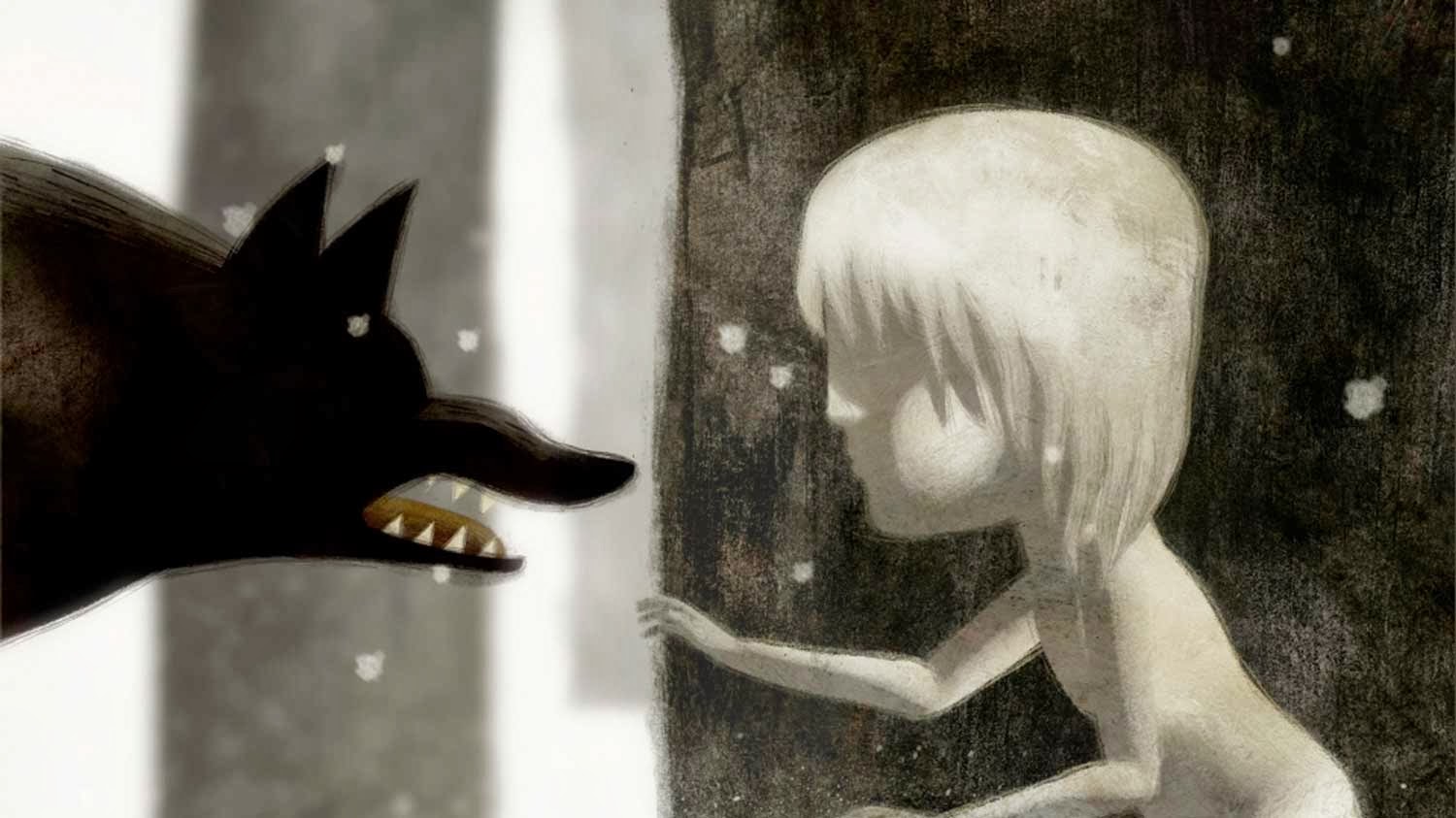 Feral is my favorite of these short films. It is a beautifully realized little story about a feral boy who is clothed and taken to the city, but who cannot quite be civilized – because civilization itself doesn't know how to be civil. The film is unrealistic in style, perhaps even surreal, and one wonders if the city is real, if the boy is real, if the snow is real. Or perhaps the boy is actually a wolf, or a bird, or a stag, or a leaf, or maybe he's a spirit of some sort, taking on the energy of the things he touches. This is a little mystery, but it doesn't ask its audience to figure it out; it asks for us only to go with it. And once we do, the film becomes about being, about personhood, about interacting with the world around us. Lovely.
Will Win: N/A
Could Win: N/A
My Rating: Not ranked 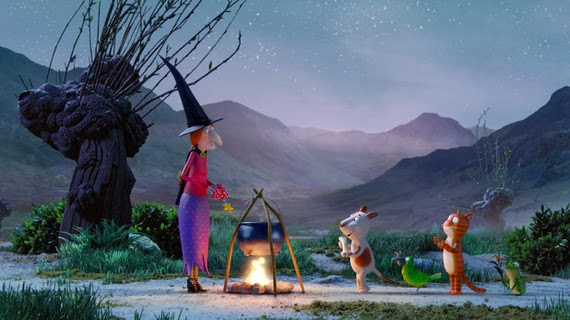 Absolutely charming, this little story is about teamwork and sharing. There is a dragon – who is an enormous coward – and the most adorable animated cat since Antonio Banderas's puss in boots. (I seriously loved this animated cat, which is very strange since I don't much like cats in real life. This one has the best personality ever.) Quite frankly I expected not to like this one much – the animation simply isn't that interesting – but the story is charming, and the expressions on these animals' faces are just adorable.
Will Win: N/A
Could Win: Animated Short Film
My Rating: Not ranked 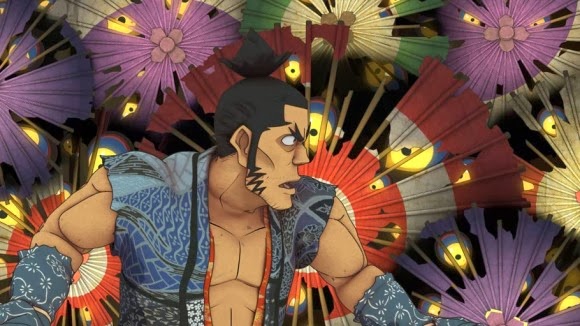 Imaginative and fascinating, Possessions is a ghost story: a tale about forgotten or abandoned objects that have gotten old enough to acquire their own souls. They trap a traveling mechanic/salesman/tailor (whoever he is, this guy is ripped) in an abandoned cabin in the woods, and they play tricks on him until he can figure out how to be kind to them. It is an interesting little tale that is easier to make sense of once one understands it as a kind of kaidan.
Will Win: N/A
Could Win: N/A
My Rating: Not ranked
Posted by Aaron C. Thomas at 4:38 PM No comments:

The big awards are finally tomorrow. I hope you've seen as many of the films as you can. There are lots of real gems out there (La Grande Bellezza, Gravity, Her, and Before Midnight) are my favorites among the nominees. This is a year that is really hard to predict. It looks as though there are three frontrunners, and at any given moment, I feel like changing my predictions. So if the evening is full of surprises tomorrow (and I will be surprised even if my predictions work out), it might also end up being rather disappointing (if American Hustle starts taking home Oscars). 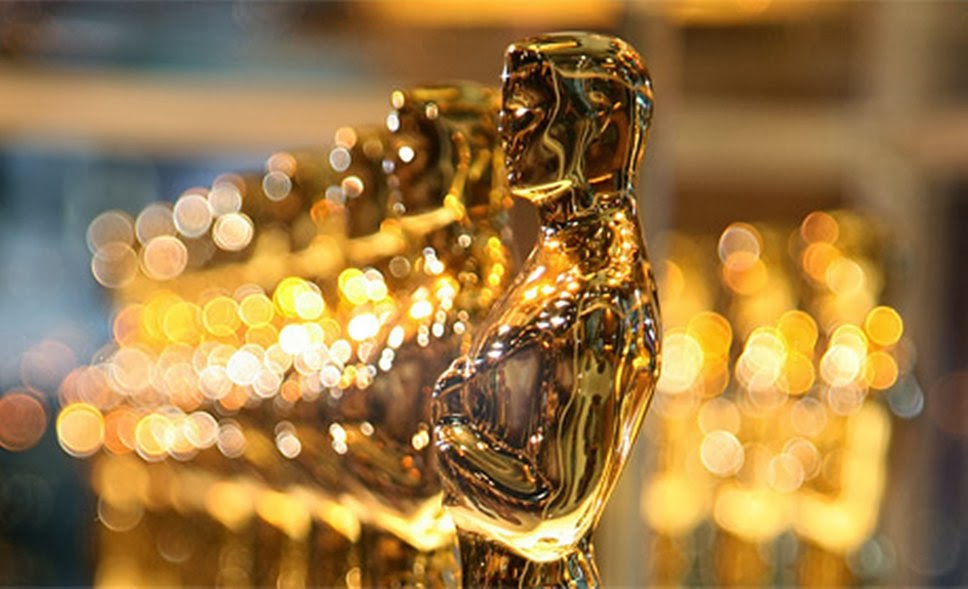 Anyway, we shall see! I plan to have lots of fun watching, and I'm working on a Gravity-themed cocktail for my guests.

Here are my Oscar predictions:

Happy Oscars, everyone.
Posted by Aaron C. Thomas at 11:10 AM No comments: