From my friend Michael, a little Wednesday hymn for Atheists.

Email ThisBlogThis!Share to TwitterShare to FacebookShare to Pinterest
Labels: religion

David Michôd's Animal Kingdom is a story of a crime family--a group of petty criminals, actually--who sell drugs, rob banks, kill policemen, and randomly threaten hapless civilians. The story is told from the perspective of a seventeen-year-old nephew who has lived outside of the family for most of his life. Sounds good, right?

Well, to be honest, it really isn't. Part of this reason is one of the last movies I saw was Jacques Audiard's Un Prophète, which doesn't quite tell the same story, but does cover the not dissimilar narrative of a young male naïf who learns the ropes and then rises meteorically to run the criminal show. Un Prophète, however, is a far superior movie to Animal Kingdom. 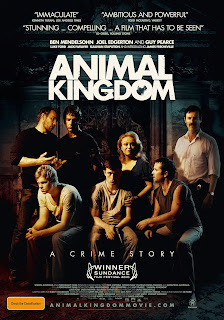 Michôd's film tells its story in fits and starts, pausing to lovingly shoot a walk down a hallway in slow motion, and covering what could be illuminating dialogue with its score (which is, admittedly, probably Animal Kingdom's most interesting component).

The more I think about Animal Kingdom, in fact, the more I think that it wishes it were a Gus Van Sant movie. But Gus Van Sant would appear to know a lot more about building tension, casting, and cinematic poetry than David Michôd does. Too, Van Sant is not really interested in cold movies. His films have real affection for their protagonists and, indeed, for their supporting characters.

Michôd is highly critical of his characters, while simultaneously employing a Van Sant style of shooting those characters. The effect is bizarre to say the least, and I kept waiting for Animal Kingdom to lurch into real action, to ramp up its brutality, to ratchet up its tension. But the film simply never goes there. It is content, instead, to behave as though it is an emotional character study, revealing the inner workings of masculinity and family dynamics in an Australian crime family, when it is clearly nothing of the sort.

Two more things:
I want to point out that Michôd includes a direct homage to Van Sant in Animal Kingdom, when he has one of the characters sit watching the music video of Air Supply's "All Out of Love" after his friend has been murdered. I took this as a direct reference to the scene in Last Days when Van Sant shoots the video of Boyz II Men's "On Bended Knee" almost in its entirety.

The other thing I wanted to underline before I finish talking about Animal Kingdom is the fact that Un Prophète is totally great. It's a French prison movie about a young Arab (a naïf, like the young man in Michôd's film) who goes to work for the Sicilian mafia while in prison, learns to read, then learns Italian, then starts running his own setup while still in the clink. It's also simultaneously brutal, poetic, intelligent, and incredibly tension-filled, with a stellar central performance by Tahar Rahim. I highly recommend it.
Posted by Aaron C. Thomas at 1:40 AM No comments:

One More Thought on Academia

I have been reading Michael Eric Dyson (who I find simultaneously irritating and illuminating), and he says the following in an essay called "It's Not What You Know It's How You Show It: Black Public Intellectuals":

Many conservatives believe the university is a den of politically correct educational thieves, robbing our kids of their moral futures with all sorts of strange theories.

Well the university isn't all it's cracked down to be: an artificial environment removed from the lives of real people. Last time I checked at my university, there were actual bodies in the classroom, real people running the place, and life-and-death issues being fought over by people who will one day run businesses, defend clients, make millions, enrich lives, ruin government, and become politicians (sorry for the repetition) in the Real World.


Preach it, brother.
Posted by Aaron C. Thomas at 1:35 AM No comments:

Poem for the day by Paul Éluard. This is called "Invention" and it's from his collection Répétitions. The translation is by Mary Ann Caws and Patricia Terry.

An acquaintance of mine this week referred to the work I do as "working in an ivory tower" or words to that effect. A relative of mine several months ago similarly referred to my writing as "batting theories around" or some equivalently flippant dismissal. It is easy to take criticisms like these very seriously. It is very hard, in addition, not to take them personally (they are, after all, meant personally).

In a world where one's sphere of impact can oftentimes be very small – even for people who are allegedly very powerful – a note like this from a former student is a great reason to keep teaching, keep theorizing, keep criticizing, keep writing, keep thinking. We're talking about people's lives.
Posted by Aaron C. Thomas at 1:06 AM No comments:


"Forgiveness is the release of all hope for a better past..." Wow.

I have now watched this video about a total of ten times. And every single time it makes me cry. "If I really was created in God's image. Then when God was a boy he wanted to grow up to be a man: a good man. And when God was a man - a good man - he started telling the truth in order to get honest responses."
I can barely deal with how good this is, how this voices so much of my life all at once.
Posted by Aaron C. Thomas at 10:05 PM 1 comment:

When Sarcasm Goes a Long Way

I have some witty friends. The following is a facebook status I posted. My friends responded with some of the funniest and clever comments I've ever received on a facebook post. At any rate, here it is:

Aaron: I don't mind heterosexuals as long as they keep it to themselves.
Katerina: If they want to reproduce that's their problem, just don't do it in my schools or shopping malls.
Liz: And keep them out of my church. Jesus wants nothing to do with your angsty slutty bullshit.
Frank: I mean, don't get me wrong, some of my best friends are straight. But it seems like I can't even walk from my apartment to the subway station without seeing a couple of breeders holding hands or making out or displaying their progeny.
Carrie: I think it's better not to ask, not to tell, not to pursue heterosexuals. If we wouldn't make such a big deal out of our heterosexuality, then gay people wouldn't have to fear us in the gym showers and such. We need to keep our private bedroom practices private.
Jordan: The thing about heterosexuals is that they could change if they really wanted to.
Driggers: I blame my mother.
Posted by Aaron C. Thomas at 11:50 PM No comments:

Poem for Today by Joseph Mills

On the Writer's Almanac, this morning, the featured poem was Joseph Mills' "The Guardian" from his collection Love and Other Collisions. It begins:

I don't think my brother realized all
the responsibilities involved in being
her guardian, not just the paperwork
but the trips to the dentist and Wal-Mart,
the making sure she has underwear,
money to buy Pepsis, the crying calls
because she has no shampoo even though
he has bought her several bottles recently.

You can read the rest here. The poem's ending is superb.

As I get busier and busier with my comprehensive exams, never seeming to be able to do the reading I am supposed to do for the day, and so feeling as though I will never catch up, I really miss my friends and family. Not that I have the time to speak to them, in all honesty, or that I have anything to say to them -- my life consisting primarily of having read or not read the day's 140 pages or having taught, with varying degrees of skill, the week's classes.

In truth, reading is not a lonely business. Reading, rather, feels like a connection, like sitting at the foot of masters. I have felt this way reading Gloria Anzaldúa and Cherríe Moraga, especially. But then the book is over and I am on to the next book. Stuart Hall and then Paula Gunn Allen and then N. Scott Momaday and then Gayatri Spivak and then Cherríe Moraga again and then Homi K. Bhabha and then Michel Foucault because Dr. Bhabha started to make me tired.

At any rate, I am currently living for connecting with my friends and family through social network sites and email. The encouragement that I get from the internet is about all that there is right now and I am trying to be particularly appreciative about it.
Posted by Aaron C. Thomas at 10:47 AM No comments:

Last night, while reading Cherríe Moraga's book of poetry and essays, The Last Generation, I came across the following tiny poem, entitled "Meditation":

That's all there is to "Meditation," but the poem served to do so much in the few seconds it took me to read it. It's a reminder -- an important reminder, in fact -- that the third eye is there for me to use. That I ought to be working at developing its sight as much as I work at clarifying the site of my other two eyes. And it is a reminder that though we may weep through our standard pair of eyes, there is still a future, something to look forward to, a future where we may not have to weep quite as much.
Posted by Aaron C. Thomas at 7:28 AM 1 comment: