Once More with Too Many Feelings

For the record, I loved the first of these movies, Rise of the Planet of the Apes, and I really really liked the second one, Dawn of the Planet of the Apes. (I wrote an entire post about how the film thinks about justifying violence; the movie is very interesting.) This means, of course, that I am the target audience of Matt Reeves' third movie, War for the Planet of the Apes, since I already love the characters, already care about the fate of the apes, and am hoping the humans can leave them alone to live in peace. (Rupert Wyatt directed Rise; Reeves directed Dawn and War.) 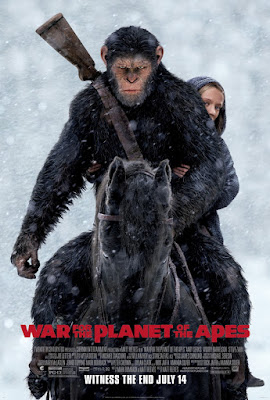 Reviews of this third movie were good, so I was excited. But War falls mostly flat. It is a slow, ponderous type of thing that follows the conventions of 19th century melodrama to a tee. This means that all of the emotions in it are overdone, everything is milked for the absolute last drop of feeling that can be squeezed out of it. This is supposed to be an action movie, and it does have some good action sequences in it, but Reeves is not focused on action as much as he is focused on the feelings of everyone involved in the action. So even when we are in an action sequence, we get shots of sad chimps, looking wistfully at the camera and dreaming of better days or a world without action. All of this kind of thing slows us down, and it takes Reeves forever to do what he's trying to do.

The small, tearful, white child up on Caesar's horse stands in for all of this movie's many many feelings.

The other problem with War is that it is too intent on meaning. It takes itself extremely seriously (à la nineteenth-century melodrama). The other movies were serious too, don't get me wrong, but now that we are in a third movie, Reeves has decided that what the films are about is racism and not animals. To be sure, both topics are about the ways that we exclude people from the category of the human, but the first two movies told us a story and let us make sense of what the movies had to say. Not War. War makes explicit allegories about nationalism and Steve Bannon and the alt-right. Worse than that, the film simply tells us all what we already know about racist white supremacist without using the allegory of apes to see if there's anything new we might learn about the logic of neo-Nazism.

Still, the allegories aren't really the problem. What the allegories do is contribute even further to the slowing down of the entire pace of War. The real problem is the slow pacing of Reeves' staging and his sentimental treatment of every moment of feeling so that what could be a simple moment turns into a four-minute sequence. What could have been a good, tight, 117-minute movie became instead a 140-minute Spielberg melodrama with chimps.
Posted by Aaron C. Thomas at 10:39 AM No comments: 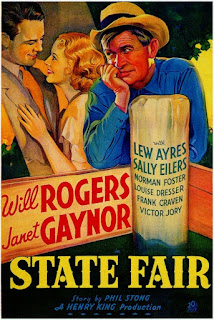 I hadn't actually realized the Rodgers and Hammerstein musical State Fair was based on an original film. Anyway, this is it. And Henry King's film is charming from start to finish. And this movie also had some pretty great shots for 1933: the roller coaster rides were a highlight.
Posted by Aaron C. Thomas at 12:59 AM No comments:

The Beguiled and Baby Driver 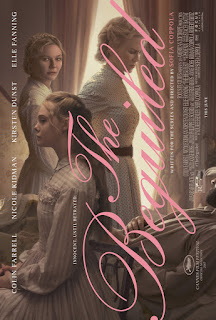 But I find that Coppola's movies make assumptions about audience identification or comprehension that aren't always quite there yet and so The Beguiled makes unjustified moves, assuming we are following, and we eventually end up playing catch up.

The other sort of odd thing about The Beguiled is that it isn't really sure whose side it's on. This is strange. Are we supposed to identify with this soldier against the women (the film seems to think so during a long sequence in the third act in which he is allowed to articulate his grievances), or are supposed to be on their side, to take pleasure in their actions? This just isn't clear, and if Coppola knows what side she wants us to be on, she hasn't made a film that helps us do that. Again, I think Coppola's filmmaking makes assumptions about audience identification that haven't actually been achieved.

This didn't bother me too much, though. I just love me some Nicole Kidman and Colin Farrell and Kirsten Dunst. And this film uses all of them very well. (I continue to be baffled by the popularity of Elle Fanning, I must say, but to each her own.)

The best thing about The Beguiled is the costumes. They're absolutely genius. I really hope that  Stacey Battat gets her first Oscar nomination for this. 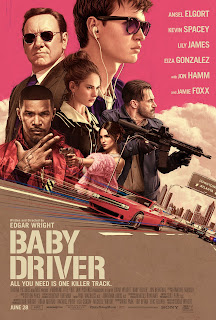 Edgar Wright's Baby Driver is better than what I am about to say, but once it occurred to me that Baby Driver is La La Land for people who hated La La Land, I couldn't forget the association. To be sure, Baby Driver has guns and explosions and the best car chases I've ever seen in my life, but it is just a little more gimmicky than I could handle.

This is a fun twenty-first-century musical, and it is definitely Wright's most accomplished, finely directed film to date. But... well so much of it just seemed so overly phony. This is not helped by Kevin Spacey's absurdly over-the-top performance and the film's ridiculous romantic plot, which even has an entire La La Land fantasy sequence near its end.

Do not mistake me, though. This is a good movie. And I enjoyed it a lot. That the film does not have enough Jon Bernthal in it is, I think, indicative of why I didn't completely love this picture. Baby Driver is more interested in sentiment and fantasy than it is in crime, violence, or really scaring its audience. Instead, everything in the film takes place in a kind of Disneyland version of criminal activity, in which it is inevitable that love will save the day.
Posted by Aaron C. Thomas at 8:08 PM No comments: 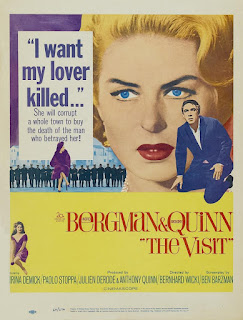 Bernhard Wicki's The Visit did not work for me. It stars Ingrid Bergman and Anthony Quinn, as well as a wonderful Valentina Cortese, but I didn't like it, and the entire conceit fell flat for me. A woman returns to her hometown and shames them because they shamed her when she was young? This kind of revenge is not interesting to me... I think because it is emotional revenge rather than a logical, murderous revenge. Killing someone, I guess I can get. Shaming him or her: no thanks. Also, I don't think I had ever read Friedrich Dürrenmatt's play (on which this film is based) and I have to say that if the play ends the way this film ends, I don't like the play either.

The Visit had fabulous costumes (that was why it got an Oscar nomination), but its camerawork was very strange, and its sentiments left me cold. 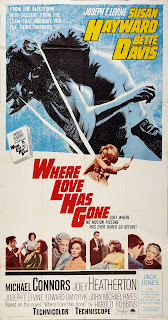 I honestly don't think I have anything to say about Edward Dmytryk's Where Love Has Gone. This was apparently based on a true story, but it is a soap opera through and through – something Jacqueline Susann might have written. It stars Susan Hayward (who I adore) and Bette Davis (who is beyond all adoration), but... this is dumb. It wishes it were a murder mystery, but it actually never builds any tension in that direction. In other words, I never cared who committed the murder in the first place. This is a melodrama through and through, a kind of poor man's Mildred Pierce, but it never really picks a side and so the final suspenseful moments have no effect.

Where Love Has Gone was nominated for Best Original Song and, if I'm honest, I don't really dislike the tune, sung by Jack Jones. It's a big, bright, brassy sort of thing with lots of violins, rather like something Frank Sinatra would normally make into a hit.

As for the movie though, don't bother. 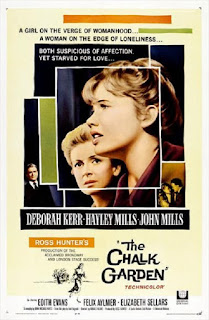 The Chalk Garden is another boring potboiler that was probably originally a stage play.

Ok, I went and looked it up and of course it was a play – by Enid Bagnold. the film is directed by Ronald Neame, and he tries his best to make this something other than a stagey movie, but I'm afraid there's no saving it. It's a kind of David and Lisa or Miracle Worker sort of thing, where a teacher gets ahold of a precocious young woman and somehow convinces her to be less crazy and stop causing everybody to fret so much.

Edith Evans was nominated for an Oscar for this picture, and she earned her nomination. She plays a cranky old grandmother who believes she's caring for the young woman in her house but who is actually causing rather a lot of trouble because she's being so darned indulgent and not reading this child the riot act. 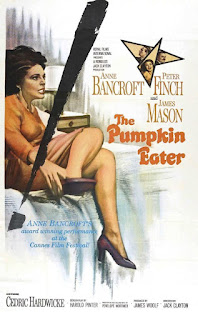 Jack Clayton's The Pumpkin Eater follows a woman played by Anne Bancroft who has many children. Her husband is cheating on her (cheater, cheater, pumpkin eater), and she figures this out over the course of the film. Maggie Smith appears (in 1964!) in a tiny role as the first of her husband's lovers whom we meet. Peter Finch plays the husband, and this movie is interesting, even if it is quite strange.

The thing is, The Pumpkin Eater is a brooding, slow movie, and it is more than a little odd. I appreciated it more than I liked it. But it is about depression, and watching a movie about depression is not the easiest thing in the world to do.

Still, it gets kudos in my book for trying to get into the mind of the depressive in 1964 and not simply treating depression as something that needs to be somehow dealt with or cured. And I really love Jack Clayton's work as a director. I think his 1959 Room at the Top is near perfect, and this is gorgeously, assuredly made even if I didn't enjoy watching it, particularly. Clayton was really ahead of his time.