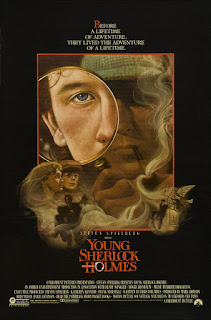 Eye roll. Anthony Higgins is fun as the fencing master in this movie, and if I'm honest I will admit to liking Bruce Broughton's too-sweet score, but otherwise... this kind of wink-wink nostalgia movie – heavily dependent on the dramatic irony of knowing who Sherlock Holmes will be as an adult – is not for me. The fact that Barry Levinson's usual brand of nostalgia in this case is tainted a) with an absurdly boring heterosexual love plot between two teenagers and b) with a heavy dose of Orientalist colonial racism made Young Sherlock Holmes decidedly less than enjoyable.
Posted by Aaron C. Thomas at 12:51 AM No comments: 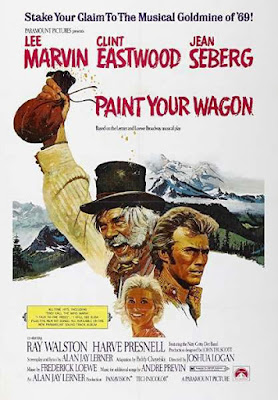 A musical comedy starring Lee Marvin – who cannot sing at all – and Clint Eastwood – who can, kinda. This is also the tale of two men devoted to one another and married to the same woman and a town of whoring, drinking, gambling, kidnapping gold-miners. The music is great, especially the scoring and choral direction. Joshua Logan's direction of the film itself, which clearly cost a fortune, is absolutely great. It has extraordinary crowd scenes, tons of great practical effects, and it's hilarious. The whole, however, is not really equivalent to the sum of its parts.
Posted by Aaron C. Thomas at 12:17 AM No comments: 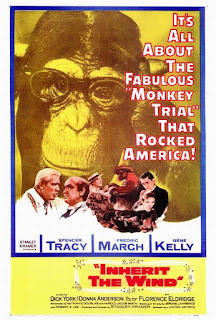 This is very smart and the script absolutely sparkles with both wit and wisdom. My enjoyment of this picture, however, was a bit tempered by just how much time it gives to religious insanity. This film also forces us to listen to "That Old Time Religion" and "The Battle Hymn of the Republic" numerous times apiece. It was all just way too much for me. There were some true religious nut-jobs in this movie, and the movie gave them a lot of airtime without – to my mind – really telling us the film itself thought these people were terrible.

Also, this is not about the Scopes Monkey Trial, despite the way that poster foregrounds the chimpanzee and says this is the fabulous 'monkey trial' that rocked America. Fabulous? Really? What the movie is really about is a kind of long-form debate about what Christianity ought to look like in the future.
Posted by Aaron C. Thomas at 3:21 AM No comments: 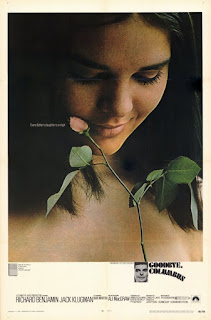 Goodbye, Columbus is pretty great. It's a smart script, and I enjoyed this. Its tone is really smart, too – moving deftly between broad comedy, comedy of manners, and serious drama.
Posted by Aaron C. Thomas at 12:16 AM No comments: 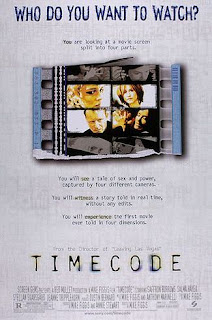 A friend of mine screened this at a faculty film club in Tallahassee. Timecode is quirky and very strange – as any film that is mostly improvised is bound to be. But it's also quite a funny satire, and is a very interesting experiment in film. I really enjoyed this, even though the four-screen conceit doesn't work for at least half of the time. The trouble is where do you look? What are you supposed to watch? The director doesn't have much control here - even with the actors - and so the tone is uneven in general. Still, this is a fun experiment, and I enjoyed the film.
Posted by Aaron C. Thomas at 12:58 AM No comments: 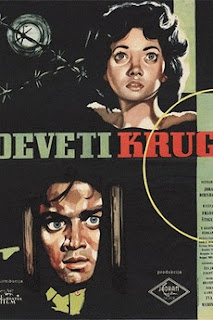 So, The Ninth Circle was nominated for the Best Foreign Language Oscar the same year (1961) as Pontecorvo's Kapò, Roberto Gavaldón's brilliant Macario, and Clouzot's La Vérité (also brilliant), and they gave the damn Oscar to Bergman's boring The Virgin Spring. In any case, The Ninth Circle is very, very well made, and it is surely – with Kapò – one of the first films made about the camps. So much of the film is a love story (under Nazi duress) that I was expecting something else entirely from this film by the end – I, incorrectly, as it turns out – assumed the ninth circle was a reference to Dante's final circle of the inferno and signified the betrayals of Judas, Lucifer, and Cain.

But Deveti Krug shifts boldly in subject matter in the middle of the third act, and the ninth circle of the title turns out to be a literal section of the camp and not a literary reference to treachery. (Incidentally, Peter Weiss's The Investigation uses the circles of the Inferno as a formal way of tracking through the camps and the Nuremberg trials, and in the play we move further and further inside the camps.)

Because the movie shifted so drastically, I really wasn't prepared for the punch France Štiglic's movie delivered, and I ended up truly stunned by The Ninth Circle. Boris Dvornik, who plays the male lead, is outstanding in this.
Posted by Aaron C. Thomas at 12:43 AM No comments: 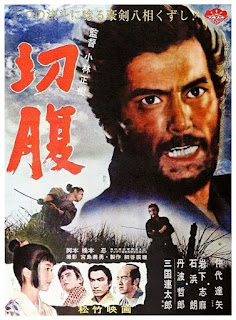 Harakiri is an excellent film, superb in every way. The writing is stellar, the acting is uniformly great. It's also deeply affecting while also being very cool. The cinematography here is the real star, though: Miyajima Yoshio's work is incredible. There are sections of the film that are breathtakingly shot. It's brilliant. Satō Kei also gives a genius performance in the role of the leader of the Iyi clan. This whole thing is just impeccable. If you haven't seen it, or if samurai films seem all to run together in your brain, you should revisit this one.
Posted by Aaron C. Thomas at 11:03 PM No comments: 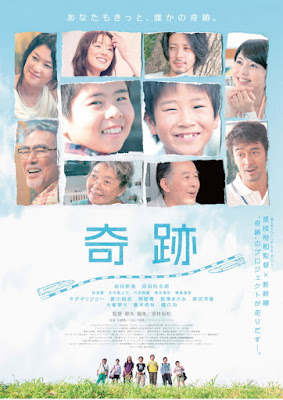 Kore-eda is just so good. I loved I Wish (奇跡). It's touching and sweet, but as with all of Kore-eda's movies, I Wish undercuts its sentimentality with farce and doesn't allow us to get mired in its sweetness
Posted by Aaron C. Thomas at 10:40 PM No comments: 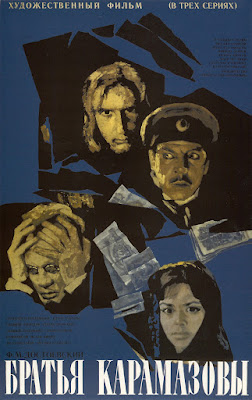 Brothers Karamazov (Братья Карамазовы) is a magnificent film. Ivan Pyryev died before he could finish it, and the two lead actors - Mikhail Ulyanov and Kirill Lavrov finished it for him. This film is epic and grand, with big emotions, gorgeous camerawork, beautiful costumes, and a truly brilliant performance by Ulyanov. I loved this, and it deserves every accolade it's been awarded.
Posted by Aaron C. Thomas at 11:55 AM No comments: 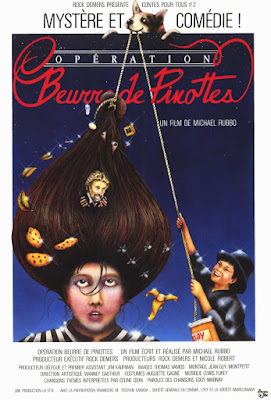 Well this is weird. My friends with whom I do an unseen movie night (where we watch a movie that none of us has seen before) chose this insane children's film as our movie this week. So many strange things happen in it that make no sense and fail to connect up. The movie follows the logic of, say, a father who is telling a bedtime story to a child who keeps interrupting to ask weird questions so that he has to keep inventing nonsensical explanations for things. In short, The Peanut Butter Solution makes no sense. It was fun to watch, though.
Posted by Aaron C. Thomas at 7:59 AM No comments: 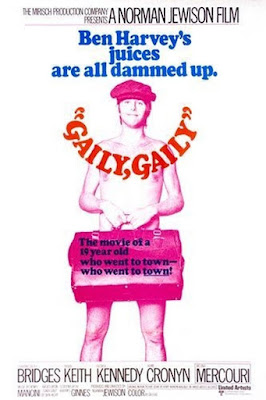 Gaily, Gaily is an innocuous period comedy set in the early 20th century. It's a bit of a shame, because this could have had something to say about government corruption and 1969 and young people rebelling and finding solace in art, but Norman Jewison's film settles for easy laughs and broad comedy. One can't complain too much, though. It's rather a pleasurable romp. The costumes are great, Melina Mercouri is quite fun, and the whole thing is filmed with a kind of madcap glee.
Posted by Aaron C. Thomas at 12:11 AM No comments: 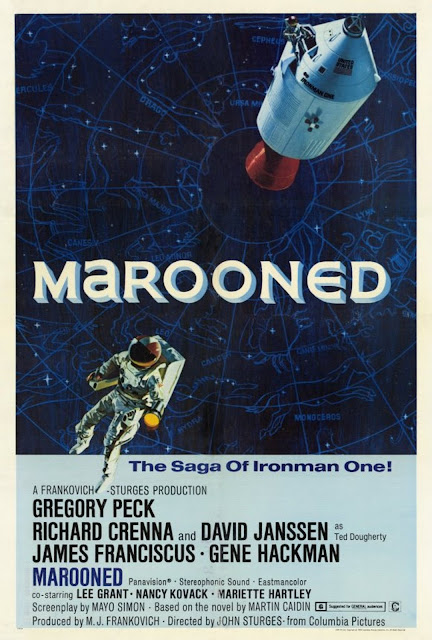 Marooned is great. It's terrifying and wise and honestly it's sort of stunning that this movie came out 4 months after the moon landing and 4 months after Hurricane Camille leveled the coast of Mississippi. This is a movie with a botched re-entry into Earth's atmosphere and a hurricane. It's powerfully directed and beautifully acted. Gene Hackman is excellent and sad as one of the astronauts, and Lee Grant is really wonderful as one of the astronauts wives. Richard Crenna and Gregory Peck give sturdy performances. And David Janssen, who I don't think I've ever seen in anything, is bright and charming. I was really into this. I do love a scary space movie.
Posted by Aaron C. Thomas at 12:14 AM No comments: 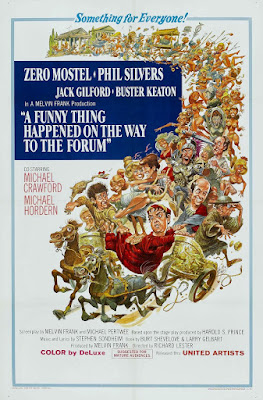 Meh. This film version of A Funny Thing Happened on the Way to the Forum is fun, but it isn't really funny. Although the film's style is fairly clever, they've cut a lot of the songs. I liked the music-video quality of many of the numbers – "Everybody Ought to Have a Maid", especially. But the actors playing Hero, Philia, and Dominia are all underused.
Posted by Aaron C. Thomas at 12:31 AM No comments: 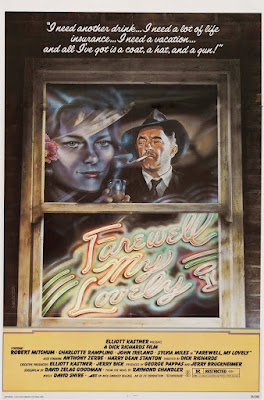 Farewell, My Lovely is a kind of copycat Chinatown without – it seems to me, at least, any stakes. In the first place, Robert Mitchum is doing a voice-over, and he tells us way more than we need instead of the filmmaker just showing us. Sylvia Miles is excellent in a small role, but this mostly never picks up any momentum, even when Sylvester Stallone is murdering a lesbian madam in a Hollywood cathouse.
Posted by Aaron C. Thomas at 12:14 AM No comments: 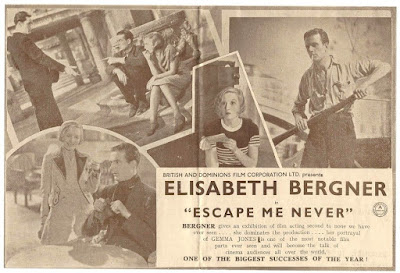 Escape Me Never is not at all what I expected, although I suppose the title ought to have tipped me off that I was watching a melodrama and not a comedy. But Paul Czinner directed the first act of this like a comedy, and so I was lulled into believing this would be a light, fun film. It turns out to be one about co-dependence and, incidentally, much more interesting than I thought. Elisabeth Bergner, who made a sensation with this film, deserved every accolade she got.
Posted by Aaron C. Thomas at 12:09 AM No comments: 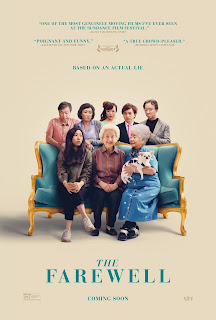 The Farewell (别告诉她) was really funny and quite charming. I really liked its Chinese critique of USAmerican liberalism, too. Mostly, though, this was funny, and that is what I wanted from it. Also the music in this movie was superb, and it had several really excellent performances.
Posted by Aaron C. Thomas at 12:53 AM No comments: