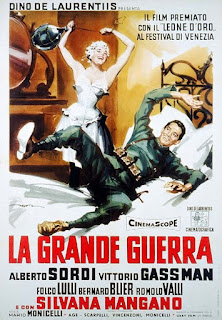 The brilliance of La Grande Guerra lies in its direction. Mario Monicelli is able perfectly to capture the satirical comedy for which he is known, the critique of war that calls such violence absurd, while also mercilessly showing us the damage that war does.

The characters are cowards, to be sure, but they are ethical and wise. They simply do not buy into the theory that war is good.

The film is absolutely genius, and if the tone of the movie is frequently comic, Monicelli's satire is consistently undergirded by carnage, by Marxist critique, and by an absolute refusal to see soldiers as heroes.

This is a kind of film that won't be seen again until Arthur Hiller's The Americanization of Emily in 1964, and even then won't be done as well as La Grande Guerra.
Posted by Aaron C. Thomas at 10:08 PM No comments: 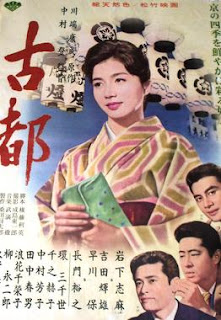 Another great movie that isn't in print in the U.S.
Koto (古都) (also known as Twin Sisters of Kyoto) is spooky and imaginative without being the least bit scary. This movie is so good. I wish I could get some more Nakamura films bootlegged!
Posted by Aaron C. Thomas at 12:59 AM No comments: 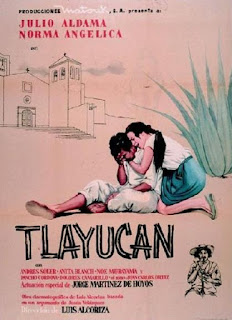 According to imdb, this movie concerns a man who becomes a thief out of desperation. If his identity becomes known, his neighbors might lynch him. The only friendly face in town is the local priest.

So... none of this is really true except that a man does steal something. And though it doesn't look like it from the poster, Tlayucan is a comedy, and quite a very good one. Furthermore, it is more of a Chekhovian story of the village itself (which is called Tlayucan) than it is a story of one man's desperation.

Indeed, as with so many movies from non-U.S. countries from this period, Tlayucan is a movie about cooperation in a real Marxist vein. So much so that the priest is, in fact, the butt of all the jokes, hardly a friendly face.

Of course, it didn't ever have a proper release in the U.S.

But this movie is delightful. I loved it.
Posted by Aaron C. Thomas at 12:40 AM No comments: 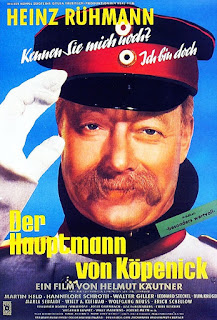 The Captain from Köpenick  is excellent. It's very, very funny, while also being a harsh critique of both the German tendency to follow rules – something that would become all the more colorable following the Nuremberg trials – and German economic policies.
Posted by Aaron C. Thomas at 12:33 AM No comments: 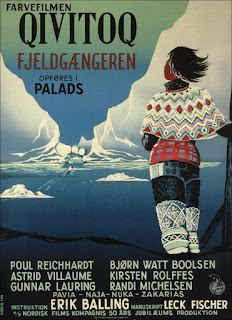 Qivitoq: Fjeldgængeren (The Mountain Wanderer) is a fairly conventional 1950s melodrama that is sort of invested in colonialism in Greenland. But the thing about Qivitoq is that it is so gorgeously photographed, it is so stunning, that every single annoying thing about the film is easily forgivable. The movie is just beautiful.
Posted by Aaron C. Thomas at 11:43 PM No comments:

Reunion in Vienna was sort of charming. John Barrymore does nothing for me, I must confess, but I love Frank Morgan, and Diana Wynyard really is a fabulous performer. I've been sleeping on her.

More importantly, there were 19 films nominated for Oscars in 1934.
Reunion in Vienna is the last of these films that I hadn't seen. 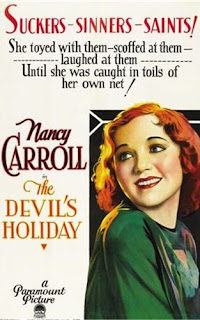 Meh. I watched this for Nancy Carroll, but even she, Ned Starks' hilarious world-wise drawl, and an occasionally shirtless Phillips Holmes were unable to save the terrible plot of The Devil's Holiday and Edmund Goulding's stodgy direction. Love me some Nancy Carroll, though!
Posted by Aaron C. Thomas at 1:22 AM No comments: 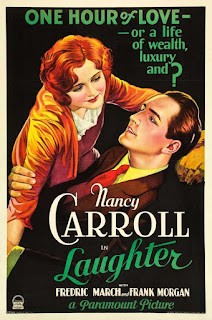 Laughter is cute. I love Fredric March and Frank Morgan both, but both are underused here. The plot is interesting, and there are a few funny bits (there is a great sequence when Nancy Carroll and Fredric March roar at each other while wearing bear rugs), but this turns out to be rather a conventional bit of business.