That you will like Brick director Rian Johnson's new film The Brothers Bloom less than you liked his first film is inevitable. (I take for granted that you liked Brick's formal devices and witty screenplay quite a bit.) Still, there is lots to recommend about The Brothers Bloom, and while I didn't like the film all that much, it is quite funny for most of its running time and very clever if not always unpredictable. 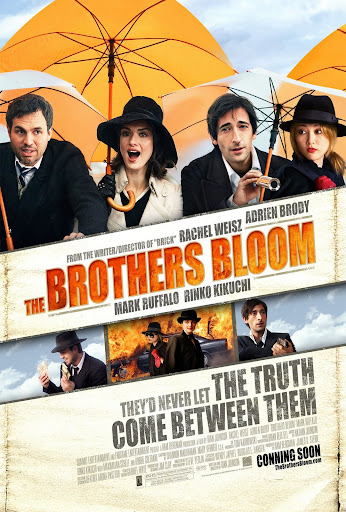 The Brothers Bloom is a crime-caper-con-artist buddy-comedy which stars Adrien Brody and Mark Ruffalo as con-artist brothers who have become the best of their profession. They pull off long-con schemes conceived by Ruffalo's character Stephen. In these schemes, Brody's character Bloom is the lead actor and he seduces the mark and becomes the protagonist in the dramas Stephen pens. These dramas all have poetry and narrative beauty and are composed by Stephen in order to give Bloom the life that Stephen thinks he wants. So far so good.

Early on in the film (but not early enough in the film) the important con of The Brothers Bloom begins and Stephen and Bloom (and their sidekick Bang Bang, who is played hilariously by Rinko Kikuchi of Babel fame) take on an absurdly wealthy heiress played by Rachel Weisz. Bloom and the heiress fall in love and the rest of the film is a meditation about whether or not what we do and feel are real, how we script our lives, and whether or not living inside of a narrative has value in and of itself.

The film is fun and whimsical. It is often very funny. Kikuchi provides lots of the humor (she doesn't speak throughout and so a single glance from her or a raised eyebrow is wonderfully loaded with meaning.) But Johnson's script also contains some delightful displays of wit. During a very smart sequence at the beginning of the movie, Bloom tells Stephen that he wants to live a life that Stephen hasn't composed for him. He wants to play a character that comes from himself, to do something that he hasn't been told to do by his brother. "I want..." Bloom says. "An unwritten life?" Stephen asks. And there is a pause. And then Bloom repeats his brother: "an unwritten life." This kind of very intelligent writing that contains its own ironies is where Rian Johnson excels.

The caper fake-out trickster stuff—of which movie-makers are lately so fond—is much less successful in The Brothers Bloom. The whimsical treatment of the film's first act continues through the second and third acts, but the whimsy wore thin when real danger was threatened, and it became hard for me to take anything in the film seriously when I was pretty sure that what I was watching was a con (the characters conning each other and the filmmaker conning me.)

So the film starts out delightfully: very funny, very clever, but Johnson doesn't quite know where to go with his plot as the film progresses and so he cannot escape his own formal strictures. Thus, the world of The Brothers Bloom becomes rather mired in its own cleverness and never achieves either the emotional levels it attempts or the fake-out wizardry of a really good caper film.
Posted by Aaron C. Thomas at 12:44 PM