I realize I haven't really posted about Joe Wright's insane adaptation of Anna Karenina. And I sort of want to be clear that I am not really recommending Anna Karenina to the majority of people. Nevertheless, I loved this movie. ... Which is not to say that I think it's a great movie or even a good movie, but I loved it, and it is definitely going to be near the top of my list at the end of the year. 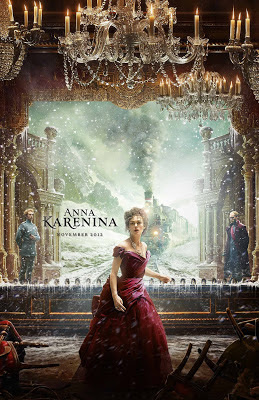 This is why Wright's Anna is sort of insane: he's set the entire novel inside of a theatre. St. Petersburg, Moscow, train-stations, the race-track: they all take place inside of a theatre inside of the film. The poetics of this are rather obvious, of course. Anna and Vronsky's relationship is on display; people are always watching what's going on between them, and Russian society is also theatrical, made for display and rather phony when it all comes down to it.

This approach to filming the novel works for these thematic reasons and several others. Early in the film, Anna's brother-in-law Levin goes to find his brother in the less expensive area of town. He walks out of the main part of the theatre, into the wings, climbing up to the theatre's catwalk. As he walks, Wright's camera finds people working. They're theatre-workers, making the "magic" of the theatre possible via their backstage labor. What this did for me was remind me not only of the class differences in Imperial Russia – those were obviously existent – but also that the magic and the theatrics of the high society activities in the novel are only made possible by the labor of others. Every time we watch an "important" scene in the novel, the film makes clear that that melodramatic scene is supported by the work of other, poorer people. I loved this.

And then when the film actually leaves the theatre, as it does once or twice, the effect is extraordinary. From the hyper-produced world of the theatre to the "real" world (it's obviously still a film, which is why I'm giving you the ironic quotation marks), the change is bracing. Going back and forth between the "real" and the theatrical is, to my mind, a fascinating approach to telling this story, dependent as Tolstoy's novel is on the differences between city and country, real labor and paperwork, high society and honest, generous, human interaction.

Joe Wright's Anna Karenina doesn't always work, but I didn't care. By the time we were a half hour into the film, I loved Wright's movie rather fiercely. I felt committed to the approach and to just going with it, even when the film's logic didn't always jell. 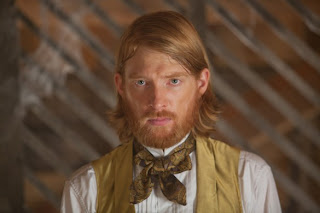 The performances are very good. The ensemble includes Olivia Williams, Matthew Macfadyen, Kelly Macdonald, and Emily Watson, and they are all very good. Jude Law is an excellent Karenin – a strange role for a leading man, but Law is capable and honest. Keira Knightley is a truly strange choice to play Anna – she's obviously much, much too young – but I love watching her, and Wright has a way of directing her that elevates her work wonderfully. Aaron Johnson is an odd Vronsky, as well. His casting struck me as wrong through and through, but Alicia Vikander as Kitty and Domhnall Gleeson as Levin are really wonderful. Gleeson (Brendan's son) gives my favorite performance in the movie (and, of course, their story is one of learning, nobleness, and the kind of life Tolstoy idealizes).

The last thing to say about the film is that it is beautiful. The art direction is superb, the cinematography (as usual for Wright's films) is clever and self-referential, and the costumes are, in a word, gorgeous. Look for Jacqueline Durran to win her first Oscar if Academy members are paying attention; it would be well deserved.
Posted by Aaron C. Thomas at 2:06 PM