Why Is This Movie Called Oblivion?

The first thing to say about Oblivion is that it is essentially a bad movie that is gorgeously designed, beautifully scored, and acted with enough energy and commitment to make it watchable. 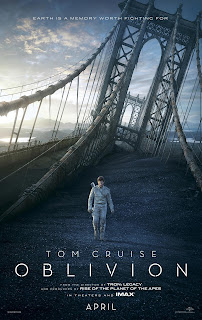 Tom Cruise is a guy living on Earth in the future with his partner. They are living on a planet decimated by an alien invasion (or something) and are now harvesting all of the ocean water off of Earth in order to move to the moon Titan in Saturn's orbit (or something like that). But Tom Cruise is plagued by memories of another woman, and also feels a longing, a nostalgia for Earth that seems somehow inexplicable for a man who has had his memory wiped for "security reasons".

Anyway, Tom Cruise basically fixes droids and flies around in a really, really cool helicopter thing until a USAmerican spaceship lands and on it is the woman who haunts his dreams/memories. The rest is the mystery of the plot. And Oblivion functions like a mystery, unfolding slowly and revealing to the audience more and more of what actually happened before the movie started.

Did I mention that all of this is sort of cheesy and laughable? It sounds less silly here as I type it out, so let me elaborate. Oblivion is interested in the sort of anti-technology/love-the-earth/grow-your-own-tomatoes politics that so many films about the future find interesting (WALL·E, for example). In the midst of all of this technology, Tom Cruise loves books (well, looking at them, anyway: he appears not to have time to actually read any of them) and sleeping on the grass, and he changes into flannel and a Yankees cap whenever he gets the chance, because he's, like, longing to be real, see, and all of this futuristic stuff is really just getting in the way.

But if those are Oblivion's politics, it traffics in exactly the opposite belief. In other words, what is cool about the movie is the absolutely awesome production design. Aside from the badass helicopter, Tom and his partner live on this station/outpost thing high in the sky where they have an enormous glass-bottomed swimming pool that is illuminated at night. The computers look sleek and innovative, like something Apple will design soon, and at one point Tom hops onto a motorcycle, which is also quite cool (with further echoes of Joseph Kosinki's previous film, Tron: Legacy).


The costumes are great, as well, especially the ones worn by Andrea Riseborough (Tom's partner). Marlene Stewart has her decked out in all manner of muted, Stepford-Wife outfits accented with various metallic elements. And if she always looks the same or looks over designed or just a little too put together, she also looks totally fabulous.

So the film is selling one thing (badass video-game-style technologies) while telling us it values something else altogether (playing catch next to a lake with your kid). It wants us to think that flannel and tattered baseball caps are the things we should value the most in the world, but it lingers over Marlene Stewart's beautiful, futuristic costumes. Oblivion wants to tell us to value playing records on the old phonograph, but its score is by M83. And, in truth, all of Oblivion's "values" sort of fail, while all of its design elements all really succeed. The future wins again.

In a lot of ways, Oblivion is really just a repeat of Tron: Legacy. And if you found Tron: Legacy basically inoffensive and enjoyable, it seems likely that you'll feel the same way about Oblivion.
Posted by Aaron C. Thomas at 12:08 AM