There were, oddly enough, two Yves Saint Laurent movies released in France in 2014. One, entitled Yves Saint Laurent, directed by Jalil Lespert and starring Pierre Niney, was released in the U.S. last June. This year, the film Saint Laurent, directed by Bertrand Bonello and starring Gaspard Ulliel was released on May 8; the second of these films was submitted by France as its Foreign Language entry to the Academy Awards last year, and is (technically) eligible in all categories except that one this year (though I don't see it getting any nominations). 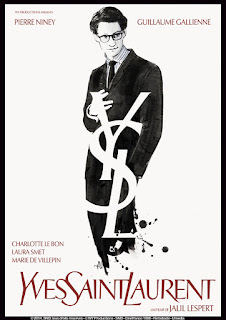 Well, two films about a legendary gay fashion designer? I obviously needed to watch both of them. Mostly, though, I just couldn't believe that this happened. How is it that two films could be made about the same man, the same set of events, released in the same year, and then nominated for a total of 17 César awards? And at the Césars both Pierre Niney and Gaspard Ulliel were nominated (for playing the same famous person) and both Jérémie Renier and Guillaume Gallienne were nominated (for playing the same famous person's famous lover). Niney won, for the record; no one else did.

There's a reason Niney won and Ulliel and Renier did not. Yves Saint Laurent is a standard biopic film, following YSL as a very young man becoming the head designer at Dior, getting fired, starting his own fashion house, and then becoming enormously famous, enormously bored, enormously drug-addicted, etc. Yves follows this story as best it can, highlighting especially the love affair between Yves and his partner Pierre Bergé. Yves is a likable film with a very gay sensibility and an aim at understanding who the man was, what his ups and downs were, and why he did what he did. It's also a story of triumph over adversity, a sort of complicated queer hagiography, that sees YSL as worth exploring because he was a celebrity and a gay man who conquered surprising odds and made something of himself. But I finished the film wondering why they bothered. I mean, why tell the story of this man at all except to celebrate the life of this gay icon? I mean, where's the thesis? What does this film have to say about the man that the newspapers haven't already said? 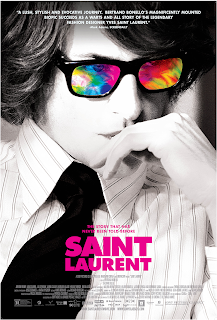 Saint Laurent is something else altogether. Saint Laurent is a filmmaker's film. It is not a movie that is interested in story or in making sure we understand YSL's rise to fame. In fact, Saint Laurent begins its narrative in the late 1960s, long after YSL and Bergé became lovers, long after the house of YSL was founded, even after YSL's famous Mondrian collection in 1965. Saint Laurent explores, instead, what it means to be an artist, the demands we make on the geniuses among us. And the movie spends time trying to understand, not YSL's decision-making processes or his artistic genius, but what he went through as a talented person who was beset on all sides by people demanding that he create.

Saint Laurent is a gorgeous film, brilliantly edited and shot, and judiciously but cleverly using split-screen techniques: early on in the movie, YSL's collections are juxtaposed with the upheaval in the world during the late 1960s, and late in act three there is a fabulous split-screen Mondrian sequence. Saint Laurent claims that YSL's designs were Proustian, as opposed to Lagerfeld and other people's pop-culture designs. And Saint Laurent itself aims for the Proustian, allowing the film to play about in memory. There are flashes of the past and even of the future throughout Saint Laurent. What do we remember and when do we remember it? And what does it mean to be in the present when the present is so pregnant with what (we think) is past?

Saint Laurent as a film is far, far superior to Yves Saint Laurent. It is a pleasure to watch from start to finish, filled with mysterious images, flashes of memory, and far less judgment than the other film. Saint Laurent, too, focuses on the labor that goes into creating the dresses themselves. We spend a great deal of time in the shop itself, watching the women labor over cutting out patterns and attempting to get things just right. It is a kind of filmic materialist analysis of the house of YSL. And if Saint Laurent is far less interested than its predecessor in making sure we understand what happened in YSL's life, it is much more interested in making sure we understand how such a life might have worked, the true cost, confusion, and frivolity of being a genius.
Posted by Aaron C. Thomas at 12:48 AM