I used occasionally to visit this website called Unintentional Hipster. I think it was a tumblr. And it was mostly just pictures of elderly people making ridiculous fashion choices and riding around on bicycles. But, actually, if a bearded, manbunned twentysomething who also went to the gym were in the same outfit, we would all be like oh hello, can someone introduce me to THAD over there? 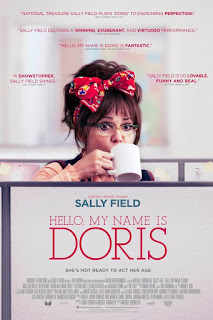 This is the premise of Hello, My Name Is Doris, an adorable romantic comedy out now on DVD about a sexagenarian hoarder whose mother has recently died. Doris, whose life has, obviously just changed very dramatically, falls in love with a much younger man who has recently started working at her job. (The man, by the way, is Max Greenfield, who is really quite gorgeous, but perhaps a bit bland.)

But Hello, My Name Is Doris is almost totally delightful, and Sally Field plays Doris to the absolute hilt. It's a great comic performance.

I think what I liked so much about this movie is that although it is clear that Doris misreads the situations in which she finds herself, and she doesn't understand how to deal with these young people, the film also knows that these young people do not know Doris herself. Her life is rich and full and interesting, and they don't understand that.

In any case, this is a very funny, delightful little film with a beautiful central performance, and a hilarious supporting performance by Tyne Daly as Doris's BFF.
Posted by Aaron C. Thomas at 12:05 AM