Antonio Campos's Christine is not an easy film. It follows a very depressed young professional who is working as a television news reporter in Sarasota, Florida, a very small television market where she reports on things like strawberry festivals and local chickens and crises related to county-line disputes. The depressed Christine can't seem to gain any kind of traction with her difficult boss, and she is also consistently saying the wrong thing in confrontations with him, making things even more difficult for her then they already are. 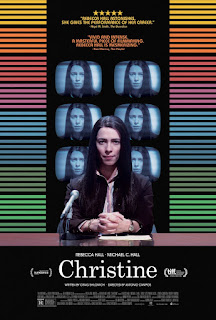 I watched Christine last Thursday night in a theatre completely empty of other patrons, and I couldn't quite blame audiences for not showing up for this movie. As I say, it is not easy to watch. In fact, much of it is downright uncomfortable. Rebecca Hall's fierce performance as the eponymous Christine never gets bogged down with trying to make the audience love her. Instead she pushes the awkwardness to the extreme. Christine is difficult to watch because Christine herself is so unbearable. She's rude and unlovable, nasty to her competitors and over-compensatingly abrupt with the people she likes. This is a portrait of a woman going through a breakdown, something she finds insanely difficult to master.

As the film's third act began, though, I started to wonder but where is this all headed? How does one end a film like this? I am an idiot and did not realize that the story of Christine is the true story of reporter Christine Chubbuck, whose story became household knowledge in 1974. In any case, the film follows the story of the real Christine, and the film ended in a way that I found completely surprising and totally justified. (Incidentally the film's denouement is pretty near perfect.)

But the standout here is not the difficult subject matter of Christine, but the skill with which Rebecca Hall plays this fascinating character. Hall's performance is extraordinary; she tears into the part remorselessly, and refuses to pity Christine, even as she sympathizes with her and loves her. It is one of the best performances of the year, and the picture is worth seeing just for her. If, however, my lack of companions at the theatre last Thursday night is any indication, don't look for Hall to garner her first Oscar nomination come January. Christine's complex and difficult subject matter is not going to find audiences queuing up to see it.
Posted by Aaron C. Thomas at 11:50 PM