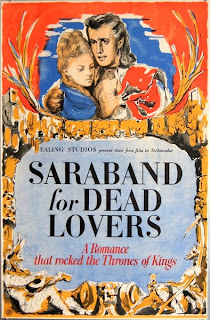 This movie is so much better than I thought it would be, and Flora Robson is pretty extraordinary; she gives a brave, fierce performance that elevates the film far above the usual period fare that the studios were cranking out in the late 1940s.

Basil Dearden's filmmaking is also super interesting, which is surprising because the film itself is the kind of sudsy big-budget period romance to which we have all become accustomed in the post-war period. But Saraband for Dead Lovers has lots to recommend it. The editing is intriguing, the tale is told with startling economy, and the politics – a set of moves in Hanover that landed the German George I on the English throne – are not without interest.

As usual with the stuff I'm watching lately, Saraband for Dead Lovers is very hard to get ahold of. If you want to watch it you will have to find yourself a (legally questionable) DVD of it.
Posted by Aaron C. Thomas at 12:23 AM