This is going to be three movie reviews in one, and the films struck me as similar in some ways because of their troubled lead female characters.

I'll start with the least interesting first. Another Earth is the story of a young woman who makes a very bad decision and kills two people. She then proceeds to make many more bad decisions over the course of Another Earth's running time. Another Earth is also about this planet that is a second Earth that is somehow (this is unexplained in the film as far as I can tell) orbiting near the Earth's own orbit. The sci-fi stuff is somewhat intriguing, and also very much a retread of the grief-fantasy that forms the title of John Cameron Mitchell's film Rabbit Hole. In any case, the sci-fi stuff is not really a part of the plot hardly at all. In reality Another Earth is a two-person melodrama with the backdrop of this enormous scientific/space breakthrough that is (eventually) unrelated to the film's dramatics. There is a lot with which one could be annoyed with in this film, but I found its star Brit Marling interesting and didn't mind the movie too much. 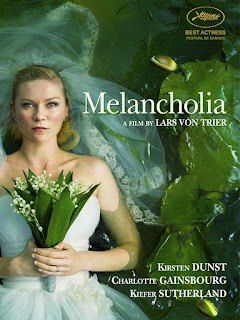 Melancholia, Lars Von Trier's new film, also involves a planet moving toward the Earth, although this time the planet will actually crash into the Earth and (probably) destroy it. In a way, Melancholia's science fiction also takes a backseat to the film's real dramatics, but Von Trier is much, much better at personal wounds and melodrama, and Melancholia is always interesting, even when one is irritated with the film's main characters or frustrated with their private pain. One of the things I love about Melancholia is that I didn't quite understand a lot of it. I really like that. The film is deliberately obtuse at times, and there is much that feels very fleshed out for the actors and director, but which was lost on me. Fine. In a way, it seems to me that this is how sadness/grief/melancholia works, i.e. that there is much that outsiders simply cannot comprehend; there are things that don't translate, that sound trivial or stupid when put into language. (Also, I love that we are allowed to use the word melancholia here instead of the more medicalized depression.)

Melancholia also ends up being about that planet crashing into the Earth. I am not sure what all of that is supposed to mean or do, but I found it compelling. I do have a big gripe with this film, though, and that's that the soundtrack consists chiefly of the same seven-minute (or so) sequence from Wagner's Tristan und Isolde. Now, I don't remember the plot of T&I very well, but I don't and didn't need to know the plot to be distracted by the music, which recurs more than five times throughout. And whenever it did I was thinking What does this have to do with Tristan and Isolde? Is there going to be a suicide for love here? The film is so fundamentally not about love, that I found this music choice very confusing. 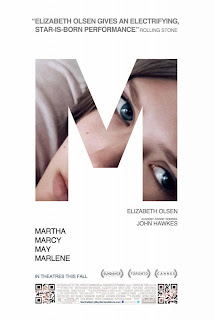 Last one, and I think I liked this one the best of the three. Martha Marcy May Marlene is about a young woman who becomes quite disturbed after living with a cult in upstate New York for two years or so. Her cult experience is disturbing, but the film also asks if what we see onscreen is real. Is this woman disturbed because of what happened to her or are we seeing what we see because she is disturbed. The film does this in a very clever way, and the storytelling here is excellent. The whole thing is interesting from the start, and Elizabeth Olsen, who plays the main character (Martha Marcy May Marlene) is superb.

Hugh Dancy and John Hawkes are also great (Hawkes is doing his usual creepy-man thing to terrific effect), but the whole ensemble is scary and very interesting. This is a psychological thriller, I guess, and it's a film that uses the (now tired) convention of questioning whether what we're watching is real in new and very smart ways. And the end of the film is perfect, asking us to rethink several other key scenes. It's a superb ending that makes this fairly good film a much better one because of its superb ending. I left the theatre a little shaken, and I have to say I've thought about this film many times since. It's stuck with me.
Posted by Aaron C. Thomas at 4:38 AM