The more I think about Hugo the less I like it. I have mentioned before that I have never felt like Scorsese movies really have anything that connects them – there have been a lot of good movies, but he doesn't have an aesthetic voice like Spielberg or, say, P.T. Anderson or Nolan or the Coens. When I watch one of their movies I know I'm watching one of their movies, whereas Scorsese's movies sometimes feel to me like they could've been directed by a whole variety of people. (This might be a good thing. I am not criticizing; just noting.) 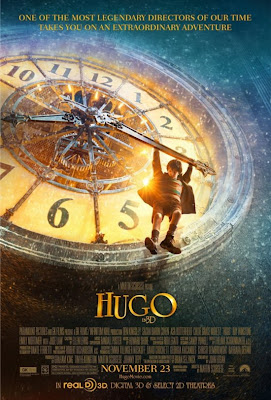 I said earlier on here, also, that I kept thinking Tintin Hugo was an animated film. It's not. Well, it's partially not. There is so much CGI in Hugo that at times I thought it would've been better as an animated film. Hugo is also as candy-coated as Jean-Pierre Jeunet's Amélie, but lacks the real magic of that picture.

Hugo follows a small orphaned boy who repairs clocks in the train station in Paris. And he lives in the train station and scrounges for food and tries not to get caught by the local security guard (played by the impossible-not-to-like Sacha Baron Cohen). He is trying to repair a little metallic automaton who he thinks can write him a message from his dead father, so he is stealing little machine parts from the toy vendor in the train station.

There are all kinds of charming side characters, as well, not one of whom is developed beyond a line or two. This is a particular shame because they are played by Frances de la Tour, Richard Griffiths, Christopher Lee, and Emily Mortimer.

Okay, well, the plot begins to revolve around this mystery. Who is this toy-maker (Ben Kingsley) really and what secrets does he hold? The trouble with this is that we know that Ben Kingsley knows the solution to the mystery from the beginning of the film. So all of the machinations of the film, the running around, the near-death experiences, the crying, the run-ins with Sacha Baron Cohen's giant dog, could easily be avoided simply by coming clean to Ben Kingsley about what they know. Instead, Hugo and his playmate do not, and we have a movie. I say this to say that I spent the whole movie waiting for Mr. Scorsese to tell me the information that I knew he was keeping from me. This made the whole thing excruciatingly predictable.

Hugo has been referred to as a love letter to the movies by many critics, and they are right. There are long sequences where we watch very old films. All of those sequences work like gangbusters. They are fabulous. And I would've preferred them put together in a documentary film narrated by Martin Scorsese instead of in this film that looks, for all the world, like a film by Frank Capra.

There is much more to say about this picture, I suppose. I loved Helen McCrory in it, and Dante Ferretti's production design is just gorgeous, occasionally breathtaking, even. Howard Shore's score is lovely and may even be nominated for an Academy Award (His scores for Scorsese are almost always disqualified by AMPAS because Marty uses well-known music in all of his films for the really important sequences. He does that only once in Hugo, as far as I could tell, using one of Erik Satie's Gymnopédies at a key moment.) Mostly, though, I just thought this film was slow, like its timing was just off for the entirety of the picture. It was pretty, and the old films were nice, but it was more predictable than Thor.
Posted by Aaron C. Thomas at 11:31 AM