I've been thinking about furniture music.

A dear friend of mine and I were having a conversation about his artistic work over at the American Laboratory. I had this vision of their new installation happening and the artistic director running around telling people not to listen to the words, but to keep on drinking their alcoholic beverages.

That is what furniture music is.

It's kind of an important moment in theatre history and in modernist art. I mentioned it to a colleague at work today, however, and he just looked at me blankly, so I thought I would share the story, though many of you probably have heard it before. It's an excellent one, told in Roger Shattuck's The Banquet Years: 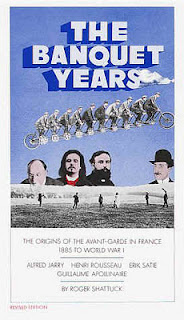 In March, 1920, the actor Pierre Bertin organized at Paul Poiret's fashionable Barbazange gallery a concert of music by les Six, songs by Stravinsky, and a play by Max Jacob. The walls were covered by a show of children's paintings entitled "Les Belles Promesses". At the start of the first intermission in the play, Bertin presented Satie's and Milhaud's new discovery: "musique d'ameublement" or furniture music.

We urgently beg you not to attach any importance to it and to act during intermission as if the music did not exist. Specially written for Max Jacob's play (always the ruffian; never a bum), it hopes to contribute to life the way a casual conversation does, or a picture in the gallery, or a chair in which one is or is not seated.

When the audiences began to get up for the break, a piano and three clarinets, placed in the four corners of the room, plus a trombone on the mezzanine, struck up what sounded like popular ditties played over and over again in close rhythmical patterns. The audience began to take seats again. Satie rushed around the gallery exhorting them to appropriate behavior. "Talk, keep on talking. And move around. Whatever you do, don't listen!"

What's so funny about this story is that, of course, this is how we listen to music now. We listen to it as background at the gym, in the elevator, during intermissions, of course, but also at the grocery, in our cars, at the bar, while we do the vacuuming. In 1920 this was not the case and Satie, as usual, was far ahead of his time. It is the extraordinary achievement of artists like Satie (I don't dare call him a dada, but couldn't I?) to make art into something to which we don't pay attention. To elevate the quotidian to the level of art by demanding that music not be listened to, by asserting, in fact, that art itself was just as important as a conversation with a friend.
Posted by Aaron C. Thomas at 12:02 AM