Sometimes it doesn't matter how well a movie is made, or how much a movie impresses me. 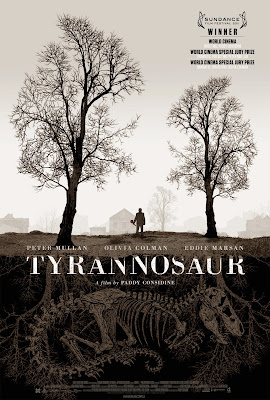 Which doesn't really mean that I liked it. Yes, it is all of those things, and actually, I did like it, but it's the sort of bleak movie that doesn't let a person go after it's over. I might even feel a little depressed by Tyrannosaur. And, honestly, the film is not totally without hope, so I am not sure why I am finding so affecting.

Maybe it's that I've been watching so many war-effort films from the 1940s and so I wasn't really prepared for the brutality of a film about today, or maybe it's that I read a disturbing play today and just couldn't handle so much violence in one twenty-four-hour period. I'm not sure. But no matter what it is that's making me so sensitive today, I appreciated Tyrannosaur, but I don't think I'll be recommending it to anyone I know. It's a serious film, with some great performances, but it packs a real wallop, so enter with care.

But that poster! Can we talk about that? It's fantastic!!
Posted by Aaron C. Thomas at 12:15 AM