The Warmest Color - A Queer Forum

I asked a couple of fellow queers to have a little conversation with me about Blue Is the Warmest Color (La Vie d'Adèle). Here it is:

Aaron: I can start since I loved it. I think it is the best thing I've seen this year. And I think there are numerous reasons for that. I think what stood out to me most was Abdellatif Kechiche's emphasis on pleasure - eating gets lots of screentime. I loved that. I was also, obviously, in love with the way blue itself is simply everywhere in the movie.

Blayze: I adored this film overall. A combination of a coming-of-age tale and a love story, the intensity and brutally honest story telling is what makes it successful. The tight close ups on Adèle to mark her journey, the sound design of the sex scenes (sweet Jesus), and even the length of the film itself add an incredible, tangible vitality to a perhaps simple plot. And yes, Aaron. The pleasure from food and eating was very effective. I loved it.

Kirsten: I thought this movie was the most successful in its telling of Adèle's initial discovery of her sexuality. The emotionless sex with that dude, the kiss on the stairs at her school, and that beautiful fantasy sex scene were all really succinct and powerful moments. After that first act of the movie, it kind of lost my love. What I liked about the first lesbian sex scene – the one where she's masturbating and fantasizing about Emma – and didn't like about the later sex scenes was the psychological element of sex. We had a point of view in that initial lesbian sex scene. The marathon sex sessions later in the movie felt kind of toothless. Also, simpleton that I am, the jumps in time were kind of confusing. I felt like I didn't know enough about the characters to feel for any of them. And I didn't like the eating stuff. I liked that Adèle was kind of a mess, but I did not like that she ate like a savage.

Blayze: My biggest problem with the film is actually hearing interviews from the two actresses (Adèle Exarchopoulos and Léa Seydoux) and their "approach" to playing these queer characters. But I was completely swept up in the movie to care too much. 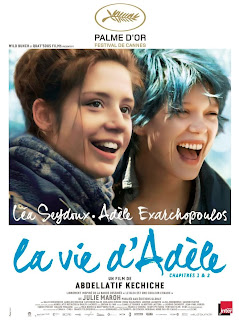 Aaron: I haven't read anything about the actresses, though I loved them both. But what about queerness in the film? I thought that the film seemed to understand desire as multifarious, and approached pleasure in an interesting way. If Adèle doesn't enjoy sex with Thomas (the Jérémie Laheurte character) that doesn't mean she wouldn't enjoy it with Samir (Salim Kechiouche) or Antoine (Benjamin Siksou), right? To say nothing of the pleasure of flirting or kissing or other pleasures that needn't necessarily be gendered. I think the reason I was so taken by the (as Kirsten calls them) "marathon" sex sequences (and there were also a great many of them) was that this, for me, is the awakening into sexuality and personhood. And in real life that awakening doesn't happen instantly (as it does in so many movies) but it takes a while, and it happens during sex – which can be a lot of work, incidentally. It is also a kind of accretion. One gets used to having sex, and things begin to make a kind of sense, right?

Kirsten: Yeah, I can get behind that idea. Coming into oneself as a queer-identified person has to involve sex. That's an important thing to recognize. That's what's awesome and awful about being queer. Sex is front and center.

Blayze: I also loved that her awakening was gradual. I don't know if I buy that their first sexual experience was all that natural for Adèle, but it definitely verified her queerness at least at that carnal level. It is front and center as Kirsten put it.

Aaron: Right. Not "natural". Not at all. It's not about insisting on a naturalness, but rather on a gradual awakening. And I feel like we do see this in movies about straight people every once in a while (I am thinking particularly of Monster's Ball and Unfaithful), but rarely in movies about queer people. In other words, although sex is front and center in terms of coming into queerness, it is often elided or euphemized in film.

Kirsten: Absolutely. Blue Is the Warmest Color does confront that piece of queerness well. Just in the fact that they show all that sex. But about her being with men later in the film, while I like that her sexual expression is fluid and driven by her vulnerability, it always annoys me when a woman in a lesbian relationship cheats with a man.

Aaron: Yes, of course. Me too. Although I was so mad at Emma at that point, particularly because Emma made it seem like cheating with Lise (i.e. cheating with a woman) is somehow better/cleaner/purer than cheating with a man. That whole part was really cruel.

Kristen: I know! Frankly, I didn't like Emma very much throughout the film, but I really hated her when she threw out Adèle right on the spot. Also, why did she meet her at a restaurant later when she was in a happy relationship? And later, why invite Adèle to the art show? Typical lesbian psychological bullshit.

Blayze: I don't know if Emma implies that cheating doesn't count as much with a woman – I think she throws her out and gets so incredibly cruel because she is simply hypocritical in the moment. This is a great love for both of them, and the cheating hurts more when it's you that are cheated on, not vice versa. Emma's reaction is human, not specifically because she's a lesbian.

Kirsten: Also, what the fuck about oysters?

Aaron: Ha! What do you mean What the fuck about oysters?

Kirsten: It's an ongoing tongue-in-cheek thing about the texture of oysters being like eating "something else". All the forty-something lesbians in the audience cackled with delight. Leading me to worry about what's going to happen to my vagina as I age...

Aaron: Hahaha. But they're tasty!

Blayze: Can I also just say that I hate that it all ends with her being chased by a man?

Aaron: But it doesn't! It ends with her walking away. No?