I've been listening to the Inside Llewyn Davis soundtrack since the producers started streaming it in its entirety via NPR music on November 3rd. I like folk music, though, and I am generally excited to see either Chris Thile or Justin Timberlake on any CD ever. Old songs like the ones that fill Llewyn Davis connect with me somehow, and I absolutely love the most important song in the film, "Dink's Song". In any case, I felt predisposed to liking Llewyn simply for its music – that is, in addition to loving it simply because it's a Coen Brothers movie and, well, they don't actually ever make bad movies, just films that are more or less difficult to love. 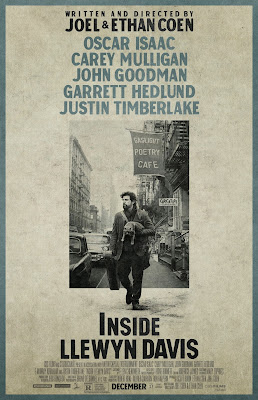 I'll wager that most people are probably going to find Llewyn Davis one of the more "difficult to love" Coen films. I know I did. I am finding the best way to describe it as a A Serious Man meets O Brother Where Art Thou? (When I said this to my friend Justin he instantly quipped: O Serious Man Where Art Thou?) But in truth, Inside Llewyn Davis is quite serious. Its main character is a difficult man who spends the entirety of the movie further messing up his own already precarious life.

The film's structure, too, is difficult. The film begins, moves along for a bit, and then it fades to white. Is what we see next a flashback? The film doesn't tell us until much later, but one gets the sense that this has all happened before, that Llewyn Davis is spinning his wheels, continually making the same mistakes and not learning from them. Llewyn stays on his friends' sofas. He imposes on them. He eats their food. He makes very little money. And although it is snowing outside, he has no winter coat, no boots, and no intention of moving south any time soon. Llewyn tries to make music – tries to earn a living making music – but he has principles, see. He doesn't want to make the kind of music other people want to make. He wants to sing folk music. He is, in fact, great at singing folk music, and the early 1960s saw a kind of renaissance of folk music.

I really liked Llewyn, even if it isn't all that likable. I know men and women like Llewyn: difficult people who simply can't ever get their lives to make a kind of sense, who never can get a foothold but keep working hard at it, doing their best but continuing to make terrible, selfish decisions. And I liked him for all that. He's sympathetic and difficult, and I wanted to take him in and clean him up. I felt a little like his friends the Gorfeins, I guess.

Back to structure for a second: the whole thing is a riff on Joyce's Ulysses. Llewyn is a kind of depressed pícaro, traveling from New York to Chicago and back again. He comes across all kinds of shady and colorful characters on his travels, and he is joined by a cat (several cats, actually). I have been frustrated with the film's bookends since I saw the picture. My sister and I wondered why the film needs to repeat itself. We both initially thought this was a kind of structural flaw in the story, an unnecessary bit of Guillermo Arriaga-style dramaturgy. But the more I think about it, the more I think it is doing important thematic and emotional work. Things really are repeating. Things really are cyclical. He really does go back to doing the same thing over and over again. He keeps fucking up. He keeps going back to his sister's house when he runs out of money. He keeps running into orange tabbies. And the songs, too, come back. These are old, old tunes, and they are given a new life in his music. If the movie repeats itself, these songs, this man's decisions, repeat themselves too.

The appearance of Bob Dylan at the film's end said one other thing to me. Renaissances like the rejuvenation of folk music as a genre in the 1960s are paved by unhappy, struggling people like Llewyn Davis. These people do the thankless work of making space for people like Bob Dylan. There is no Bob Dylan without guys like Llewyn who perform the labor of teaching audiences about what is good, giving music a kind of cultural value, rediscovering songs that other people will make famous, playing guitar on other people's famous hit records. Inside Llewyn Davis gets to the struggles of people who end up never finding fame or fortune in the industries in which they labor, but who contributed deeply, on a grassroots level, to the USAmerican music scene.

I should mention, too, that the performances in Llewyn are pretty awesome, particularly Oscar Isaac's work. I really liked Isaac in W./E. and I absolutely could not stop talking about his work in Drive, and so I am glad that this actor will be getting more work and I hope to see more excellent performances from him.
Posted by Aaron C. Thomas at 2:20 PM