Thomas Vinterberg's hard-hitting melodrama The Hunt is finally on DVD. (I keep calling this film La Chasse in my head because I first heard about it a year ago when I was in Paris and that's what all the posters said. This is actually quite confusing since it is a Danish film not a French one.) 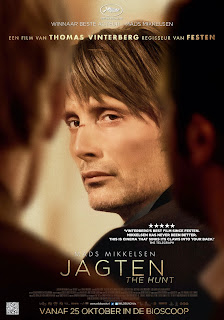 The Hunt stars the great Danish actor Mads Mikkelsen and his performance is understated and devastating. In this movie, Lucas, a mild-mannered, good-hearted, recently divorced kindergarten teacher with a teenage son is accused of sexual misconduct with one of the children at his school.

This is truly a witch hunt, in which the hysteria of the adults in the small town where Lucas teaches grows to an unbearable pitch. The movie, in fact, becomes frustrating to watch, and terribly painful as this man's life gets destroyed by the inability for anyone to speak calmly or without prejudice about the topic at hand. The hunt is also a metaphor (and significant setpiece) in the film: Lucas hunts deer with his friends and hopes to give his son a family heirloom rifle as soon as he is old enough to get a hunting license.

In the vein of Vinterberg's former Dogme-95 style, the drama is tightly focused on the interiors of its carefully drawn characters. We come to understand these people, and (at least for me) to be afraid of the things that they will do. We know them very well, and the portrayals are honest and terrifying. There is so much powerlessness in the film. Things simply get out of hand. And when a child is involved there is even less that can be controlled. Can the child remember things accurately? Do we know what children feel? Whether children tell the truth? We know for sure that children do not understand their own feelings (we barely understand our feelings as adults). But do we know whether children can even speak accurately about what happened? The whole thing is scary, and Vinterberg spins the tale as one of quiet dread, headed almost inexorably toward tragedy.

And what is a pervert? Who is this abnormal bogeyman that exists outside of society and has no place with in it? As for that question, The Hunt remains rather silent. Vinterberg's movie is about an innocent man accused of something he most definitely did not do. The film asks no questions about people who might do such things or who identify with behaviors considered abnormal. I read a great book on the topic fairly recently entitled Erotic Innocence: the Culture of Child Molesting. James Kinkaid's argument is that we as a culture invent these terrifying images of deviant child predators coming to get our children. We are obsessed with sex (of course we are) and fixated, in fact, on the sex of our own children, and so we fabricate bogeymen who stand in for our own unacknowledged desires for our children. (A great example: Florida Representative Katie Edwards and Florida Senator Kelli Stargel recently proposed a law in Florida that would ban "sex offenders" – the term covers a wide array of people – from viewing pornography of any kind while on probation. Not only are these legislators on the wrong side of Fascism and freedom of thought, they are on the wrong side of common sense and simple human decency.)

But there are no sex offenders or perverts in The Hunt. Instead – and this is what Vinterberg's film does  well – there are only hysterical adults, people who are not the least bit interested in their children, but are focused instead on themselves, their own problems, their own fears, their own self-righteousness about the world. The characters in The Hunt aren't interested in protecting children, in caring for children, even in listening to what children have to say. Instead, they are interested in projecting their own neuroses, desires, and troubles away from anyone but themselves. The Hunt is a portrait of a difficult world gone crazy.

I want to say, too, that The Hunt ends perfectly, with an excellently tense encounter between Lucas and his accuser and then a haunting finale that drove home Vinterberg's meditation on hysteria's lasting effects. This is very good stuff.
Posted by Aaron C. Thomas at 1:42 PM