Stuck in the Mud

I have some bad news. Mudbound is not very good. 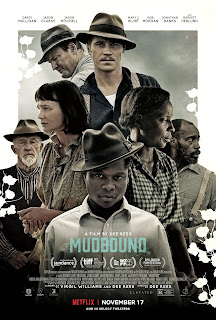 I had such high hopes for Dee Rees's new movie – distributed by Netflix – about one white family and one black family living on the same area of land in Mississippi in the post-WWII period.

But Rees's film, which is based on a novel by Hillary Jordan, has a great deal of trouble moving from the page to the screen. It always feels like an adaptation of something – as though we're missing great sections of the story that might have made the whole thing feel more interesting.

Mudbound is the story of six different people, and it can't quite make up its mind as to whom it is following, switching back and forth between the six.The point of this, of course, is to demonstrate the interconnectedness of lives, the dependence that the white people have on the black folks in the South. (What the black folks get from the white folks, aside from violence and humiliation, is not really clear to me, but Mudbound takes this for granted.)

But the film has cast its net a bit too widely, and the aspects of these six lives on which it focused frequently baffled me. There are several sequences, for example, with a tertiary character named Vera whose husband is apparently molesting their daughters. This sub-sub plot goes absolutely nowhere, functioning only as a distraction from the stories of the six main characters, stories that are already so diffusely told that I had trouble connecting with them.

This is primarily the fault of the writing, which is, frankly, bad. Each character has these voice-overs that last for about 15 seconds apiece, none of them long enough to say anything profound or to give us any insight into character. Instead, they are overwhelmingly generic, platitudes about love or brotherhood or family that meet our expectations without asking us to think in a new way or press on the ideas we already have about the characters.

The acting, too, is a bit of a problem. Mary J. Blige plays a role that ought to have been played by a more practiced actress, one who could fill out the character with a much richer backstory. Blige – who bizarrely wears sunglasses for approximately a third of her screentime – is wooden and stiff for the movie's entire length. Garret Hedlund (who is, apparently, a different person from Charlie Hunnam?) is handsome and fun, but is kept too restrained here. The one bright spot is Rob Morgan, who plays the patriarch of the black family. The film is most affectionate with him, and his character actually makes decisions and does things.

Mudbound is shot beautifully, and has understandably been receiving accolades for its gorgeous cinematography, but this, too, sort of baffled me. Why has Rachel Morrison chosen to make it look so beautiful? This is a movie about Jim Crow, about the daily indignities of life in Mississippi for poor white folks and poor black folks, and about the ways that poor white folks use the advantages of the law to better their own meager positions by dehumanizing (through violence and humiliation) and exploiting (through labor and lending practices) poor black folks. What do beautiful sunsets and handsome lighting have to do with this? To my mind it is a strange choice, even if I do like looking at a beautiful sunset.

But all this is not the real issue. The chief problem here is that Mudbound is boring.
Posted by Aaron C. Thomas at 11:54 AM