The Shape of Water

Guillermo Del Toro's new movie, which is getting rave reviews and winning tons of awards, is an, ambitious, romantic love story between a young woman and a sea monster.

I liked the movie well enough. The Shape of Water is set in a movie-version of the 1950s, during a movie-version of the Cold War. A young woman (Sally Hawkins) works as a janitor in some kind of aquaculture department of the government. There she meets and falls in love with a sea monster, who has recently been imprisoned by an evil masculine-identified 1950s man's man who would rather cut the monster open to see how it works than get to know the monster and learn from it. 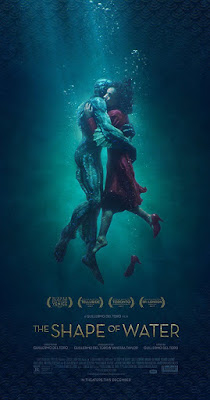 The movie is intended to be a kind of thriller, as Sally Hawkins decides to break the creature out of jail and let him live in her apartment until she can set him free into the ocean. But more importantly, The Shape of Water is a love story. Sally Hawkins falls in love with a sea monster, and this unconventional romance is front and center in the film, taking narrative precedence over the escape plot and the 1950s-intrigue-Cold-War-Russians plot.

This is a fairy tale, but the trouble with The Shape of Water is that it never wants to wade into the depths with this central complex plot point. I perhaps didn't make it clear above, that Sally Hawkins not only falls in love with, but has sex with our friend the sea monster. And this wasn't a problem for me, but – oddly enough – this wasn't really a problem for anyone else in the film, either, and the film itself doesn't present this as a problem. What is, perhaps, strange, is that if you think about it, this is a problem. So I think what it boils down to is that The Shape of Water is not actually interested in exploring problems or questions or complexities. Instead, the film is willing to ride along the surface of a romantic plot, finding this young, lonely woman, sweet and cute and (frankly) pitying her, so that when she makes love to the sea monster, we already understand; we don't wonder what's going on with her; we don't ask ourselves whether or not she should be exploring a sexual relationship with the sea monster.

In fact, my central issue with The Shape of Water is its resistance to wading into the deep end with anything in the film. Del Toro seems fine with painting two-dimensional characters and letting them alone without asking us to think about them in complex ways. This is, perhaps, most apparent with the film's villain, Michael Shannon, who plays this absurd version of a 1950s man – a racially insensitive Eisenhower voter who is easily talked into buying a Cadillac because he wants to be a "man of the future", who ignores his kids, who has unpleasurable sex with a wife he also ignores, who sexually harasses the young women who work for him, who refers to the janitors as "the help", and who would rather torture and kill the beautiful being he has imprisoned than talk to it and get to know it. He is, in short, a caricature of traditional mid-century masculinity. And Michael Shannon plays him to the hilt. But the villain is so two-dimensional that when, in the third act, the film finally asks us to think about him or care about him, we can't. He's just not enough of a fleshed-out figure.

This is also, unfortunately, true of Sally Hawkins' gay BFF, played by Richard Jenkins, a lonely older man, who knows Old Hollywood trivia about Alice Faye and pines after a handsome young white boy who works at a restaurant chain that serves bad pie. Jenkins' character is a graphic artist, and The Shape of Water gives him a little subplot, in which he is trying to get a job back in an ad agency. He is being given a small job by a man who is (I assumed) an ex-lover. But Del Toro gives this plot no resolution. We never learn what happens with these men and their relationship, and we are never told what happened with them in the first place or why Jenkins no longer has his old job. I found this strange, but it honestly went along with the shallowness of the rest of the movie. Del Toro has hastily sketched these characters and any depth they possess amounts to a set of generic conventions with which we are already familiar. (In this case, Jenkins is sad about his deteriorating good looks. He is aging, and his vanity needs a boost – he gets one, of course, courtesy of our sea monster friend.) 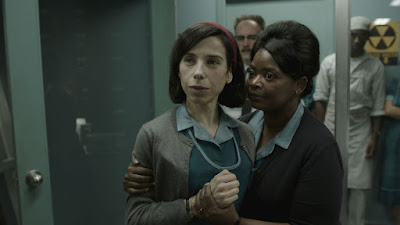 I will say that I loved Octavia Spencer in The Shape of Water, and I also thought Michael Stuhlbarg was charming and fun, but most of the movie (Spencer's parts included) made me think more of an Edward Hopper painting with the saturation turned up than a depiction of something existing in the real world. The Shape of Water, in other words, despite Michael Shannon's Trump-voter caricature, felt really disconnected from 2017, existing firmly in the realm of fantasy instead. It's a fantasy version of the 1950s, a fantasy version of the Cold War, and a fantasy version of a love story. All of this is fine, I suppose, but I was looking for more depth, for more groundedness. The Shape of Water, on the other hand, seems content with confirming a whole set of things I already think I know – about mid-century masculinity, about the ability of love to conquer difference, about the power of friendship, about the magic of cinema.

The film felt like a cartoon to me, and this is aided by the film's (gorgeous) production design, the delicately charming score, and the vibrant costumes. What's odd is that at times Del Toro seems to resist the cutesy, contained movie that The Shape of Water is. There are a couple of moments where the film seems to break with its easily digestible tone and subject matter. There is a fun sequence, for example, when the sea monster decapitates a cat, and another gross-out sequence in which Michael Shannon squeezes pus from two fingers which have been imperfectly attached to a wounded hand. These grotesque moments in The Shape of Water were my favorite of its sequences. They're places where Del Toro's sensibilities seem to peek through from behind the gorgeous visuals and anodyne version of the 1950s. These are moments where the film seemed to promise more depth than it ended up providing. For the most part, however, The Shape of Water remains shallow.

This is not to say the film is not beautiful. It is that. And its use of water, as a visual and as a theme, works very well. But The Shape of Water spends so much time on the surface of things that by the time we reached its end and Del Toro asked me to be moved to tears and swept away by the movie's romanticism, I just couldn't quite connect.
Posted by Aaron C. Thomas at 3:17 AM