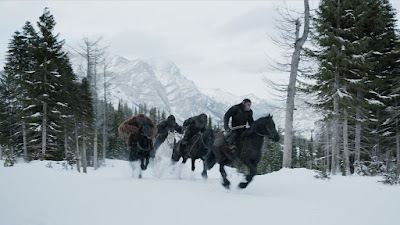 Such squandered potential. This movie looks very cool and the first two movies in the series were very cool, but this one overdoes every scene, overplays every hand, and is all around just extra. I think I would be ok with this if it weren't a melodrama, So what ends up happening is that most of what it overdoes is feelings. We have evil villains, we're shown that the alt-right is evil and racist, and every ounce of feeling is milked out of us while a tiny white girl-child looks at us with tears in her eyes. For me this fell flat. There are five options for the visual effects Oscar. The Star Wars movie seems to me the most likely winner – Shape of Water didn't get one, despite its 13 nominations – but I suppose if that one doesn't win, this one will, and last year's winner (The Jungle Book) was a lot like this one: computer-animated animals. 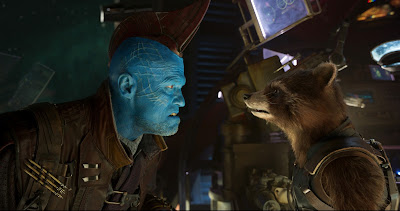 I hate to criticize this film for the same thing as I criticized War for the Planet of the Apes, but I was also mostly bored with Guardians of the Galaxy Vol. 2. This is a shame. The first one was so good, that I suppose such a thing is easy to replicate. But this one felt like a great confused mess to me, and instead of Chris Pratt fucking up and getting into trouble, this is about him, like, finding himself and learning his origins or somesuch business. There are so many feelings in this movie. This is just unnecessary! Tell us some jokes, blow some things up, have baby Groot dance. Why take things so seriously? Normally I am really into father–son narratives, but I found this one silly. Vol 2. does have some cool setpieces, and whenever we were in full fight mode I was usually enjoying myself, but I think this movie mostly just returns us to the usual Marvel, it's-almost-the-end-of-the-world-if-only-we-could-save-it formula. This is better than Apes, certainly, but not by much.

This is the one that deserves to win. It is so much better than the other nominees (including Star Wars and Blade Runner). I really really liked this movie, and I know, I know, it's a King Kong movie, but this one is excellent. Obviously, I love monster movies, and this one gives us monster after monster after monster, but it also does this really well, and it is has some interesting themes to boot. I can't recommend this enough, and although I know it won't win on March 4th, I'll be rooting for it.