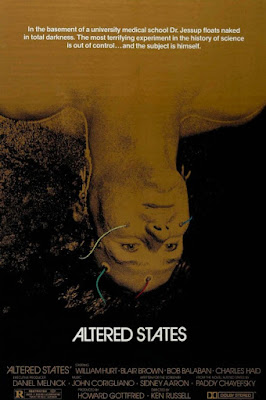 Altered States is honestly a pretty great sci-fi horror movie. It's not filmed like a horror movie – it's filmed like a basic family melodrama – but the script (by Paddy Chayefsky) is solid and the plot is fairly fascinating. It goes almost completely off the rails for a bit, and even stopped working for a while, but even that sort of charmed me. Altered States is an ambitious, interesting film. Also: William Hurt is naked for a lot of this movie, John Laroquette and Drew Barrymore both have small parts in it, and Blair Brown (very strangely) plays someone about eight years younger than she is.
Posted by Aaron C. Thomas at 12:16 AM