Victim: the Most Surprising Film from 1961 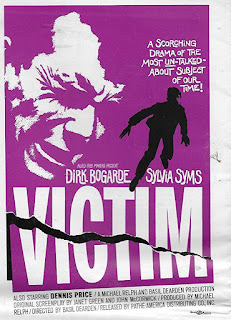 What a stunning movie this is! I've just watched Basil Dearden's Victim for the first time and I'm just bowled over.

Incidentally, I have had Victim in my queue for years as something I needed to see – important gay cinema and all that – but I only just watched it because I recently watched another Dearden movie (Khartoum) and thought it was well directed, so I looked up other movies I'd seen of his and remembered that I'd thought his direction of Saraband for Dead Lovers in 1948 was also quite good, and then I saw on his filmography that he directed Victim. In any case, I moved it up in the queue, and I'm certainly glad I did.

In the first place, Victim is a superbly made film noir: it's a crime film that follows several different people, creating a web of intrigue. In fact, it begins with a man fleeing the police for a crime we the audience knows nothing about and which the filmmaker keeps hidden from us. We know next to nothing about what is going on for the first fifteen minutes of the film. It's intensely interesting. We meet many of the film's major characters in this first fifteen minutes, but we are unable to make sense of almost any of it.

The plot of Victim, once this first act is over, is a kind of detective story, in which a man who has been wronged attempts to solve a mystery. This part of the film is intriguing and exciting, and trying to beat the con-artists and murderers is a satisfying narrative.

But Victim is also a film that is invested in a pro-homosexual point of view: in 1961 when sodomy was still illegal in Britain. At least five times – and maybe more – the film makes the case that the anti-sodomy laws in Britain need to be changed, that they are simply a reward for blackmailers and thieves. There is a great sequence when a police detective tells his subordinate that he should be less prejudiced – Protestantism used to be illegal in Britain too, he informs the lieutenant drily. We also see people's ugly prejudices, and the film exposes them as relying only on disgust and not on any real basis of morality.

The central role is played by Dirk Bogarde (who may have been a closeted gay man himself), and Bogarde is insanely good in the role. It's a performance of powerful nuances. But, of course, he has an excellent script to work with, and Dearden's direction is honestly perfect. I really loved this film.


* * *
There is one thing I need to ponder for a little longer. Twice in the movie a character uses the phrase flourish like the green bay tree to refer to the idea that a homosexual might live a life of freedom. Both times the phrase is uttered contemptuously – first by the prejudiced cop and later by one of the blackmailers. The phrase is originally from the book of Psalms, chapter 37 verse 35. The King James Version reads:


I have seen the wicked in great power, and spreading himself like a green bay tree.
I am intrigued by this usage of the phrase. I was not aware of this, but clearly the phrase had, by 1961, become a kind of code for homosexual. A little Googling has turned up a use in Agatha Christie's 1952 novel Mrs. McGinty's Dead in which a character says that a character in a play she's co-writing can't be gay: "But you can't have him a pansy, darling", she says. "Not for this sort of play. I mean it's not green bay trees or anything like that. It's thrills and murders and clean open-air fun." This passage in Mrs. McGinty's Dead heavily implies that Christie's famous detective Hercule Poirot is a "pansy", but I'll leave that be for the moment, because I'm trying to follow up on this green bay tree business.

The "play" of which the character is thinking is, of course The Green Bay Tree by Mourdant Shairp from 1933 – a gloomy piece about a homosexual and his young protégé that ends in murder. The play avoided censorship by never making this completely explicit, and the author denied it, but everyone knew what the play was about, and if one didn't understand the play's subject matter to be homosexuality, The Green Bay Tree wouldn't make a bit of sense. 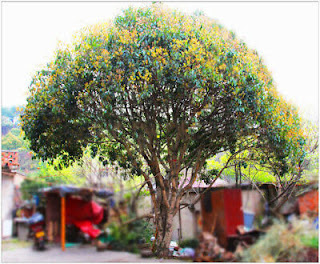 There is a Louis Bromfield novel called The Green Bay Tree, as well – this novel is not about homosexuality, and so this is likely not the source of this meaning being laid on the phrase.

Intriguingly, the Oxford Dictionary of Phrase and Fable defines the phrase this way: to develop vigorously in a congenial environment, whether or not this is deserved. There is no hint in this definition that the phrase should be linked with homosexuality.

Similarly, the early 20th century theosophist Gottfried de Purucker uses the phrase without any inference of homosexual meaning in his essay "The Great Heresy of Separateness". In 2002, M.C. Beaton also used the phrase (apparently) without this homosexual inference in one of her Hamish Macbeth mystery novels, Death of a Celebrity.

But Christie's use in 1952 and Victim's double-use in 1961 seem to demonstrate that the phrase was widely understood in mid-century Britain as the vigorous development (to quote the Oxford Dictionary) of a certain kind of person.