For me, Ari Aster's new horror-adjacent film Midsommar doesn't really work. I wanted it to work going in, and this is also my impression of most other people's response to Midsommar as well. We all want Ari Aster to succeed; we all have a great deal of good will toward him; we are compelled by many of the images he has in his brain; but we aren't quite satisfied with what he's putting out. I read one person saying I'd watch Ari Aster direct a commercial for yogurt, which is, to my mind, the kind of weak praise equivalent to saying I didn't really love this movie, but I'm glad he's making things I can watch. In any case, Midsommar is much, much better than a yogurt commercial, but it never really feels satisfactory. 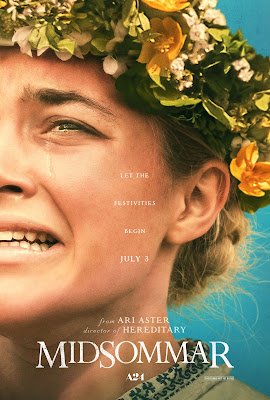 I think the problem is that although Aster is operating using a great many of horror's generic conventions, he continually refuses to use the most pleasurable ones. So there is a building dread throughout Midsommar; one feels a kind of constant terror of the horrors to come, but then there are no serious or satisfying payoffs. We never see the monster; we never watch the knife sink in; no one gives us a good, terrifying scream. Instead, he actively elides moments that could do this. In Midsommar, for example, when Josh is killed while reading the Hårga's insane holy book, there is almost no build-up, there is no terror, and there is no satisfaction when he is actually killed. Plot-wise, Josh is killed for reasons typical of the genre: he sneaks out at night and tries to look at something he shouldn't look at. What this means is that Aster sets up genre expectations, but then doesn't deliver on them. Josh is killed in an almost matter-of-fact way, we see no blood or wound, and his body is disposed of immediately. Mark, too, is killed for generic reasons, but instead of us getting to watch this, Mark just disappears. The next time we see him, he's dead. Now, of course, Aster doesn't need to fulfill my generic expectations, but if he's not going to, I would appreciate something else instead. Don't do the genre, fine, but then give me invention. Take me somewhere else.

Midsommar consistently feels one note to me. All of the characters stay playing their single one note throughout the film – think about Christian's empty, beautiful stare or Pelle's placidity or even Dani's grief. And the way he's shot the film does this too. Everything in the film feels the same – slowly haunting, respectful, beautifully composed, and distant. 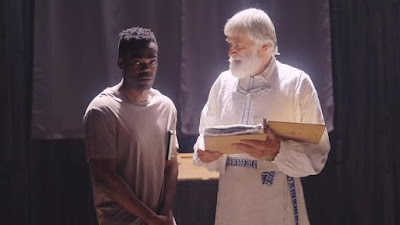 But enough complaining. As I say, Aster's work is consistently interesting, even if I left Midsommar emotionally unsatisfied. And like the person who wants to watch Aster's yogurt commercials, I too am interested in what he will do next. It's all too weird to be boring.

In Midsommar I am especially haunted by the images from before we get to Sweden – especially that image of Dani's sister with the pipe of vehicular exhaust taped directly to her face. It's a disgusting, disturbing image, and I neither can get it out of my head nor want to. Aster focuses on his corpses most intriguingly. We consistently are asked to look at the inside of bodies, of bodies broken open, showing us their viscera and often in various processes of decay (I am thinking, too, of the disgusting meat on the table during the May Queen's feast and the bear's viscera as they disembowel him). Aster is interested in what happens when the insides of our bodies are on the outside – as with the very strange thing that the Hårga did with Simon's lungs, which looked like wings as he hung there suspended in that little hut. I think all of this is very interesting, even if I don't think there's much to say about it except that it's there.

What I do think there is more to say about is the question of families – biological and found – with which both Hereditary and Midsommar are filled, drenched even. Obviously, Hereditary is about family (it's in the title), but I would say that that film is about a kind of tension between loving one's own biological family and loving the family that one has chosen. Annie's insane mother obviously opts for her chosen family over her biological one and is actively using and manipulating her biological kin in order to appease the family of the demon she serves. Hereditary and Midsommar are also about love and longing within the family. Peter in Hereditary and Dani in Midsommar want and want and want from their families, but they get nothing back. Peter begs his mother to love him, to forgive him; she cannot. And Dani emails and emails her sister and calls her parents; they don't reply. But meanwhile, the filmmaker actively destroys these families. We watch both of these families die in gruesome detail. What I am saying is that Aster is invested in destroying the family even though he is also interested in representing familial longing. Dani and Peter long for family desperately. They need their family's love. But not only is there no family, the family has been actively, violently broken apart (the images of the family's destruction in Hereditary are frankly horrific).

...And then in both films, the characters find familial solace in chosen families, or, if we're being technical about it, in cults. In Hereditary and even more clearly in Midsommar, we find that the main character begins to belong once she finds the chosen family. She avoids it, doesn't think it's a good thing, is disturbed by it, but once she gives in to the family she begins to find that she has a place there. (I think this is true of both Annie and Peter in Hereditary.)

I see both films, then, as stories of desperate need for familial belonging – of filial, fraternal, and sororal affection and desire. But in both Hereditary and Midsommar, that desire cannot be fulfilled by the biological family. Instead, the characters in these films must figure out how they fit within familial structures of belonging that are not biological. Peter and Annie can't find love in the biological family; they can only find belonging in the cult of Paimon. Dani and Christian can't make a family together, even after four years, but each can belong in his or her own way in the cult of the Hårga. In each case, affection/desire for one single person must be violently destroyed in favor of affection/desire being shared among the group, a kind of communism of affection that is understood in Aster's cults as superior to the love of a couple or the love of the nuclear family.

Whether Aster's own ethics see this kind of affection as superior to the love of a family or the love of a couple is a whole other question. Because of the affective confusion with which Aster leaves us at the end of both films, one finds it difficult to pinpoint the filmmaker's perspective on this desire for the family, and it is perhaps difficult in general to figure out whether Hereditary and Midsommar end happily or sadly. It may be that Aster sees the endings of both Midsommar and Hereditary as satisfying ones, in which each person has taken her rightful place in the world. For me that isn't true. I see the endings of both films as intellectually horrifying, even if they didn't work for me that way affectively. In other words, I wasn't scared, and I'm not haunted, but I do find myself intellectually troubled.