Last week a group of really great students and I opened and closed our production of Sarah Kane’s Crave. The production was organized mainly as an educational venture: a fun little project for the actors and the designer and me to work on at the beginning of the summer. 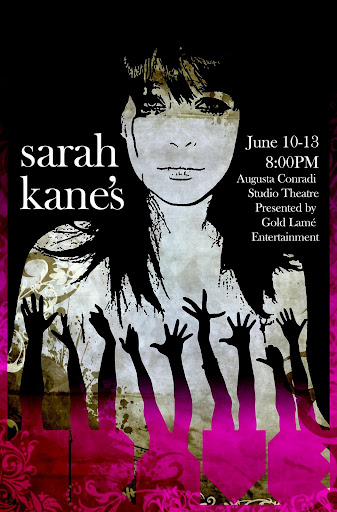 The play is only about a 45-minute piece, but the writing is so complicated and difficult that the actors were fairly panicked from day one. Still, we spent the first week and a half of rehearsals without blocking, working instead on listening to the play's rhythms and doing movement experiments with pieces of text. Here is a brief example of Cane's writing in Crave from the middle of the play. The characters are C, M, B, and A:

At first glance the text could be the thoughts of one person, which are spoken by four people. It could also be two separate conversations. A's line "Okay" could be a response to B's "Okay, two people, right?" Similarly, A's line "But looks aren't everything" seems to me a response to C's "I see no good in anyone any more." The conversations, if they exist fold in and back on one another, never staying completely discrete. Characters intervene in other characters thoughts; occasionally there are very clear conversations; at other times, the characters seem to work together to produce streams of words that cohere. In short, the script is very difficult. 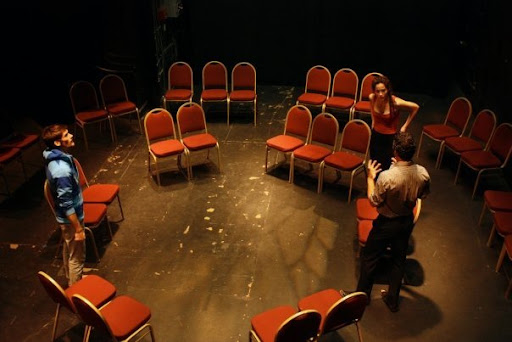 Above is a shot of the layout of the space we used for performance. I placed the audience on the stage of the theatre itself, so that we used what is essentially a proscenium theatre as though it were a black-box studio. The seats, you can see, function as an arena (theatre in the round) but there are two rows of seats, so that the actors perform in the center circle, but also between the first row and the second row—that is behind the audience in the first row—and also outside of the larger circle (behind everyone). As you can imagine, where you sat changed your perspective of the show: sometimes actors would be behind you for scenes; at other times they would be only a few feet in front of you; at others you would have a long-view perspective of a scene. The actors moved in out of this space constantly in any number of different (but, of course, carefully choreographed) configurations. 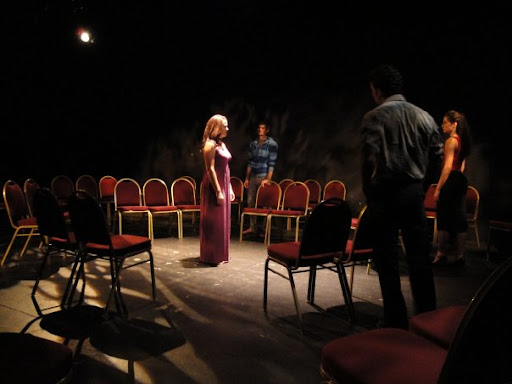 The topic of the show is depression and madness, with those, Kane also deals heavily with rape, seduction, cheating, and love. The characters themselves, who are given only letters as monikers, constantly shift. So M is the mother but she is also the doctor, also the lover, also the daughter. B is a little boy, but also an addict, lover, friend, and eventually C herself. Crave, more than anything else though, is fundamentally a show about suicide, and the play ends with the woman killing herself. 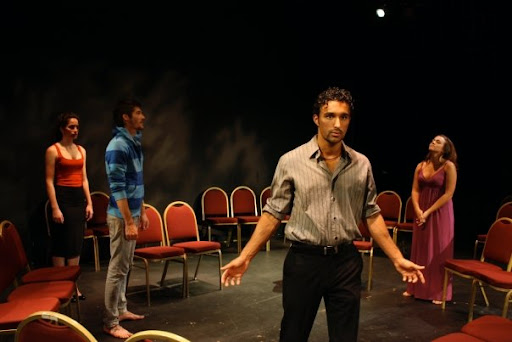 The lighting designer's work on this part of the show was absolutely heartbreaking. In the scene the characters are talking about the warmth of the bright white light: moving towards the light. The designer had the stage grow slowly brighter and brighter until all the lights onstage were at full. In the show's final moments, as the woman commits suicide, the characters alternate, but the lines are "Happy. / So happy. / Happy and free." As C said the play's final line, our designer cut the lights in the show's only hard blackout. The effect was chilling and deeply moving. For the company and I the show had very little hope in it, some perhaps, but not very much. The idea behind the hard blackout at the show's end is that the woman kills herself, and she may feel happy, but she does so, there is nothing left, only the memories of the audience. There was no curtain call. We could in no way justify applause after the kind of show we had done, and the actors couldn't really manage to walk back onstage and smile and take a bow. 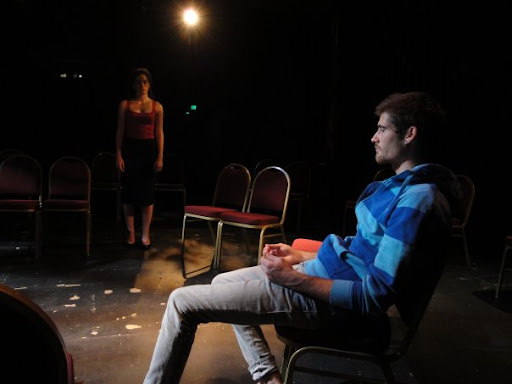 The responses to all this were very intriguing. At some performances, the mood of the audience was one of confused intrigue, not really understanding the show but respecting it. Sometimes there was no applause and the audience sat silent (at the first performance I swear we sat in silence for thirty seconds before anyone even moved.) At every performance, though, people came up to me—mainly students—to tell me how much they loved it, how much it moved them. I think the company and I are most proud that people came back to see the show more than once. Many people did this, and some came back to see the show a third time! The show definitely struck a chord. 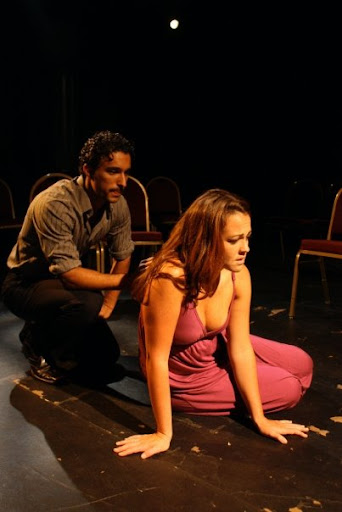 I know the company and I are all very proud of the work we did with this show. It was certainly a labor of love on all of our parts. I don't know when I've been prouder of a show or of a group of actors. And it may seem odd, but we had a hilariously fun rehearsal process. The show is so intense, I think, that whenever we weren't working we spent our down-time laughing as much as possible. At any rate, I am not sure when I will direct again, but I wanted to share this very cool experience. Enjoy the photos!
Posted by Aaron C. Thomas at 12:06 PM