This post is about Darren Aronofsky's bizarre religious film Noah. I decided to have a conversation about the movie with my buddy Rick. Our own religious backgrounds are slightly different (Rick was raised Catholic and I was raised Baptist), so we have different takes on the way the movie uses religion, but unsurprisingly the same take on the quality Aronofsky's film. 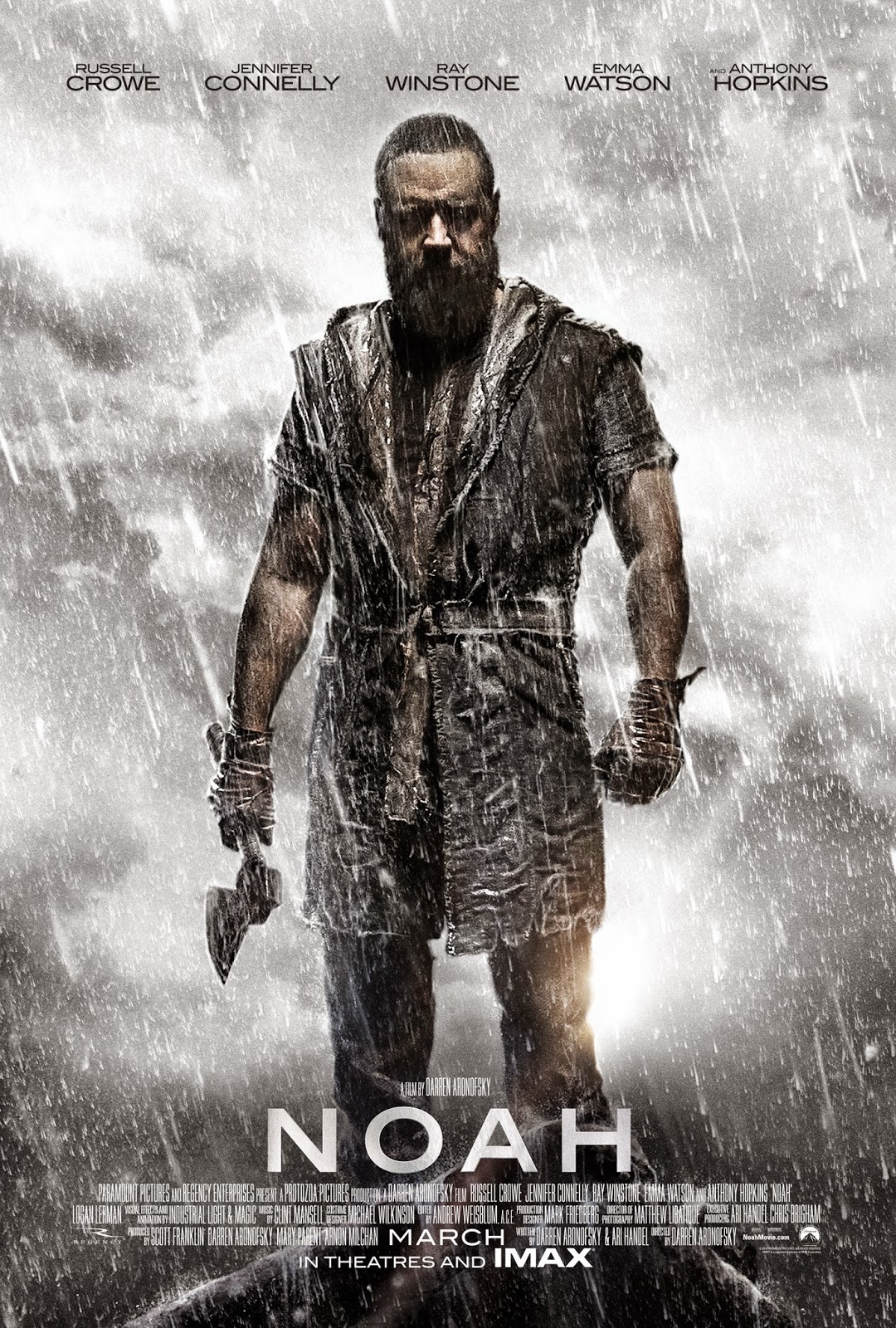 Aaron: First off, when you think of the Noah story, you think: rain, giant boat, animals, dove, rainbow. Those are the standard images, right? There is also this story in the bible where (after the flood) Noah gets drunk and his sons see him naked and cover him. (As a child I thought this part with the naked man was very important.)

Rick: The most fun part of the Noah story is obviously the animals! But Aronofsky makes the bizarre choice of not showing us one single moment with a real animal. Noah and his family don't even collect the animals; the animals, CGI all of them, come to Noah, quickly running into the ark where they're put to sleep by some kind of incense.

Aaron: Right. All CGI and all oddly napping.

Rick: This could have been hugely entertaining cinema, right here. You could have comic relief, obviously ("This one's definitely male"), but also a chance for real spiritual reflection. Maybe Japheth has a moment where he realizes, Hey, this aurochs is another living being, we're all part of God's creation, etc.

Aaron: But the film's version of the god's power is really one of violence and power, no? I mean, the god of the Old Testament is essentially vengeful and terrifying. The film gets that part right – although it is unmoored from any spiritual arrangement. The god in Noah is more like a king or a government. 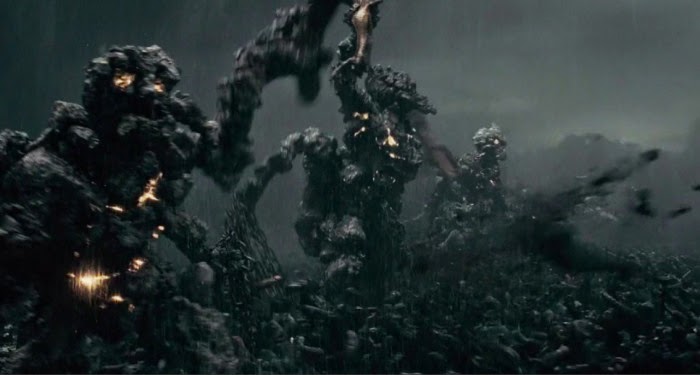 Rick: In fact, Noah and his family have no agency at all, because not only do they not collect the animals, they don't actually build the ark! The ark is built by what I can only assume are the beings of Genesis 6:4: King James calls them "giants"; my Catholic bible calls them the Nephilim. Darren Aronofsky apparently thinks they're like the rock monster from The Neverending Story. In the movie, they tell Noah that they're fallen angels, but the bible says that they're the result of sexual intercourse between angels and humans, which aside from being biblically faithful, would have been a hell of a lot more interesting from a storytelling standpoint.

Aaron: The nephilim? Giants who are not fallen angels, as the film would have it, but (according to Genesis), the men of old, who were the children of (apparently male) angels and the "daughters of men". The way they worked in Noah made me think of a kind of Hebraic tradition of golems. That's how Aronofsky apparently saw them, but the way they are described in the film is a generic blending of the myth of the fall of Lucifer (who does not really appear in this film) and the Greek story of Prometheus, who stole fire from the gods and gave it to the humans. Aronofsky is Jewish anyway, right? He is not a Christian, so his relationship to the bible is going to be much different from ours (not that I'm a Christian either.)

Rick: But the film's relationship to morality and spirituality is what I'm interested in. Why does God bring the Flood? Because of the wickedness of man. But the movie never shows you in a concrete way just how wicked man has become. You see some men acting like douchebags, and the narrative text in the opening sequence tells you that the descendants of Cain created an "industrial" society. In this same vein, you never see why God loves Noah so much. But Noah found favor in the eyes of the Lord, says Genesis 6:8. According to Aronofsky, he found this favor because he told his kid once, Hey, don't pick that flower if you don't need it. The thing is, the story in the bible is pretty short, and presented rather journalistically. But given the opportunity to flesh the whole story out, Aronofsky presents the events in the same way. The God of the Old Testament is a bastard. And a fascinating, complicated character! He's capricious, vengeful, loving; Moses even argues with him. But He's barely present in this movie. 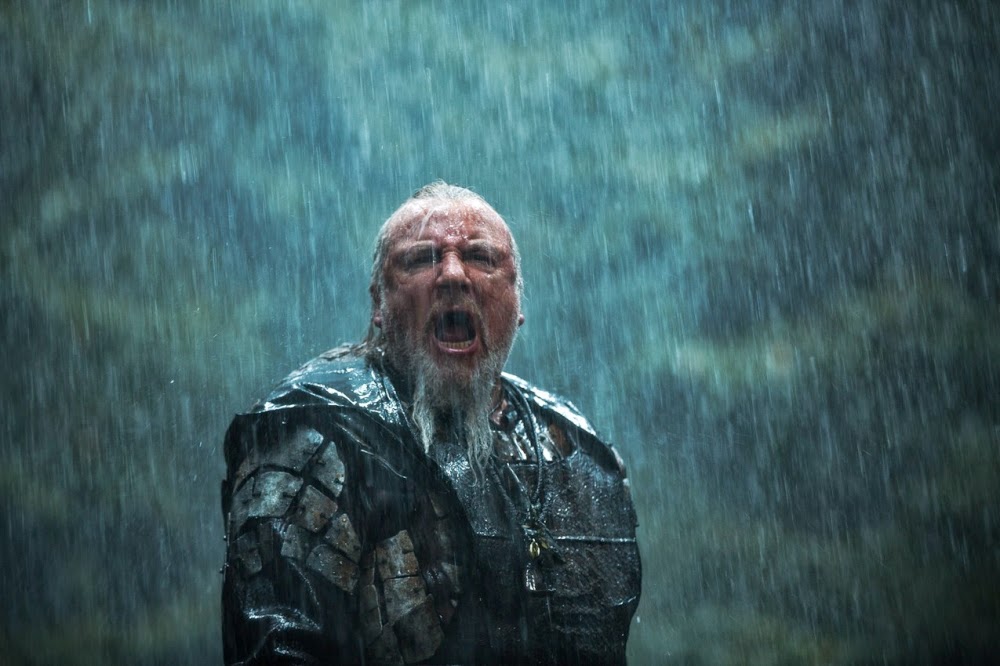 Aaron: My favorite characters, for exactly this reason, were the Ray Winstone (descendant of Cain) and Logan Lerman (Ham) figures. Winstone's character understands that he is made in the god's image, right? And so this means that everything he does is justified. His decisions are reflections of the god's own decisions. He mirrors the god. He knows this. But still the god refuses to talk to the descendant of Cain. And he begs him: talk to me. Why won't you speak to me? The arbitrariness of the entirety of the god's decisions is so clear in these moments that we spend with Ray Winstone. The god doesn't like that guy, but - as you say - we never really are told why he should choose this guy over the other.

Rick: Probably the deepest problem with the whole movie is that at its heart is a contempt for humanity. There's never a moment where Noah displays uncommon kindness towards another person or even acts in a way that makes him particularly likeable. All he does is stoically look after his family, which is, as Chris Rock once said, what you're supposed to do, motherfucker! And aside from Ham's barely-sketched love interest in the latter half of the film, not one human being who is not a member of Noah's family is portrayed sympathetically. The movie never once encourages us to ask, Hey, maybe God's making a poor choice here, and Noah himself never questions humanity's fate. At the end of the film, Hermione tells Noah that he's a good person because he "chose love." This is a sort of vaguely Catholic-ish value, but the theological idea of love (based on my layman's understanding) is first of all, a New Testament concept, and secondly, not love for your family, but caritas, or love for humanity. Which this movie clearly does not have.

Aaron:  I found the way that the film portrayed Noah's (not the film's) contempt for humanity strange. Noah totally goes off the deep end, right? I mean, he sincerely believes that humanity needs to end, and I am intrigued by this because there are these radical left-wing sects that believe that the planet would be better off without humanity. Anti-humanists and then other people who refuse to reproduce, who plan only to die out. The film rejects this as completely psychotic, of course, which is why it interests me – as a kind of rupture in a narrative that assumes we all are on the side of heterosexual reproductive futurity. (Which you might style as the vaguely Catholic-ish value "love"). As for Hermione's argument about "love" at the end of the film, the argument is identical to the one that the Descendant of Cain uses. I was made in the god's image, therefore everything that I do is a reflection of the god and, therefore, the right thing to do. This is, to my mind, identical to what she says at the end of the movie: The god chose you because it knew that you would do what is right, therefore, everything you've done is right. I am, I suppose, agreeing with you that the arguments for what is morally correct here are tortured beyond all sense and end up being just vaguely liberal.

Rick: It just seemed utterly drained of any theology or spirituality. I spent the entirety of the film wishing it had been directed by Terrence Malick, because he has a knack for making a scene seem suffused with spiritual meaning (Noah even has an "evolution" sequence somewhat like the one in Tree of Life).

Aaron: An odd thing, really, since Aronofsky's π as well as his later effort The Fountain (both of which I loved), both interrogate spirituality in rich, fascinating ways. But I for one am glad Malick isn't wasting his time on nonsense like this. I was initially interested in this movie because I am interested in revisioning Biblical mythology from modern points of view. I am interested in stories about old gods and our relationships with them. But, as you say, the god doesn't ever show up in Noah. He just flexes his muscles. For me the god was most present in the film when Ray Winstone was begging him to speak to him and he was answered only with silence. This, to me, is a much more modern understanding of how a person's relationship with god might work. Noah has it both ways – three ways, really. The god is an old man with white hair in the mountains, and the god is in the sky sending the rain, and the god is in your dreams at night. The whole thing was a big ol' mess.

Rick: A total mess, with too much CGI, crappy, ponderous writing, one-dimensional characters, and no moral message beyond Be a good person, and maybe don't eat so much meat. Oh, and every human being alive on Earth today is descended from white people.
Posted by Aaron C. Thomas at 12:36 PM