Not to be confused with Tangerines (Mandariniid) (an excellent movie), Tangerine is a film that was apparently shot entirely on an iPhone. (I am actually ignorant, but I have heard that the title Tangerine is apparently a filter (? or a color?) related to the iPhone. I don't know.)

This movie is about two transsexual prostitutes on the streets of Los Angeles, and we follow one of them as she tries to get revenge on a young woman who has been having sex with her boyfriend while she has been in county lockup. 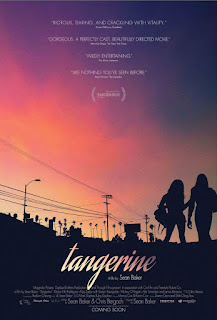 The film also follows a married man who drives a cab and who also has sex with these two prostitutes (and a particular crush on the woman who is so hell-bent on revenge).

This is, of course, an interesting premise, and Karren Karagulian, who plays the cab driver, is really great. But that pretty much sums up all the positive things that I can say about Tangerine. I thought this movie was absolutely terrible. The acting was awful: from the very first minute of the film I knew we were in trouble. I didn't believe the top-billed actress, Kitana Kiki Rodriguez, for one second. She spent the entire film commenting on her character – a character she clearly despised even while playing her.

The film's editing, too, doesn't make one lick of sense. We jump back and forth between Razmik, the cab driver, and Alexandra and Sin-dee, the call girls, but the film can't figure out why it jumps between them, and the stories themselves don't work together. The whole idea is supposed to be a kind of vérité / dogme 95 thing, but it is far too contrived for that, jumping from one improbable character that the script despises to the next.

Even worse is the "screenplay", which is not a screenplay at all. Instead, Tangerine appears to be mostly an improvised sort of thing. The film might have benefited from an actual script, and the acting, if scripted, might perhaps have seemed less phony, less forced, more authentic. But as it is, Tangerine feels like something that wants to sell us the idea that it's real. But to the contrary, it felt outrageously fake.
Posted by Aaron C. Thomas at 10:43 PM