I was really hoping that Bone Tomahawk was going to be great. It's a horror / western that stars the awesome Kurt Russell, as well as Patrick Wilson, Matthew Fox, Richard Jenkins, and Lili Simmons. I found the trailer for the film simultaneously bizarre and terrifying, and so I was looking forward to it. 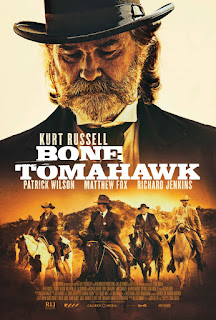 The film's plot is delightfully gruesome. A trio of people is kidnapped in a small, 19th century Western town in the desert. The town's sheriff, two deputies, and a vengeful husband ride off to find the three. They have been kidnapped by cannibals – a bizarre tribe of Americans who paint their bodies white, implant whistles in their voice-boxes, speak no language, have no name, and rape and murder their own mothers. Grisly stuff.

Everything about the film, though, is uneven. The performances are occasionally great, but sometimes very very stilted. The score sometimes fills a scene beautifully; at other times, Zahler has opted for no music at all and the film feels lifeless and boring. A different (gorgeous) sort-of western from this year called Jauja spends most of its running time in longshot, observing its characters from afar and studying, instead, the landscape and the feeling of the world. Bone Tomahawk seems to want, occasionally, to do this same thing, to observe its characters from a distance, to set them out from a very general background of desert by putting them in relief. But the camera doesn't seem to cooperate. It jumps from closeups to wide shots without apparent rhyme or reason, and the film's meditative elements seem only half-hearted, as though what we're all really here for are the grisly sequences that we watch in act three.

These are decidedly grotesque. The centerpiece of this sequence is the scalping of actor Evan Jonigkeit.

He is then turned upside down and hacked down the center of his body lengthwise. It is extraordinary to watch and really, really gross. Definitely the nastiest thing I've seen all year. There are a bunch of other grotesque images here, as well, and they are worth watching, but I found myself wondering what exactly was happening. If the grotesqueries in act three are the point of the film, why waste all the time in acts one and two doing faux character study as we follow the men to the camp for three days and nights? Why not concentrate on the murders and the corpses that result?

Comedy is a problem in this film too. Nearly all of Richard Jenkins' lines are directed to be a kind of steadily running stream of feeble jokes. Some of them are funny – the audience I was with chuckled out loud at several – but this film is a horror/western, and the comedy always felt out of place to me, or as a kind of attempted but failed nod at the Coen Brothers.

And I suppose it is mean, but I thought Lili Simmons was terrible in this. Her performance holds a single register throughout, and she never looks or acts like a woman at the frontier. She's a beautiful woman, and a nice match for the very pretty Patrick Wilson, but she struck me as awfully miscast. Matthew Fox, on the other hand, is great. He is mean and effete and arrogant and just delightful, even if the camera tends to avoid him and the film's narrative disposes of him.

In any case, the film felt to me like something that had as its priority the telling of a story, instead of having as its priority the way to tell the story. Bone Tomahawk needed as its director someone who didn't write the screenplay.
Posted by Aaron C. Thomas at 7:10 PM