Jeremy Irvine and Jack O'Connell Are Not the Same Person

Jeremy Irvine and Jack O'Connell are apparently not the same person.

I kept thinking they were. And throughout the whole time I was watching Yann Demange's Northern Ireland military thriller '71. I thought I was watching Jeremy Irvine. But I was not. That was Jack O'Connell.

Jeremy Irvine was the guy from Steven Spielberg's (pretty awful) War Horse, and he was the main character in Roland Emmerich's much maligned film Stonewall from earlier this summer that no one saw. (This probably wasn't Jeremy Irvine's fault, per se, but he became a kind of symbol for "young white gay man" taking center stage and therefore pushing to the side the people who did the real work at Stonewall.) In any case, poor Jeremy Irvine really can't catch a break, even though as far as I can tell he is a pretty fine actor. In fact, it's a little hard to feel sorry for someone who is that good looking. I expect he'll make something soon that will redeem his career. Surely he can't make only stinkers.

Both men were, in fact, born less than two months apart in the summer of 1990, and both have played leads in big Hollywood films, but neither has really made a name for himself as an actor. And both are also English: O'Connell was born in Derbyshire and Irvine in Cambridgeshire.

But the guy in '71 is Jack O'Connell. He was also the guy in Angelina Jolie's Oscar-bait/Oscar-fail Unbroken. But don't let Unbroken fool you; Jack O'Connell is a very good actor. He got great reviews for a prison drama called Starred Up, and he is great in '71. 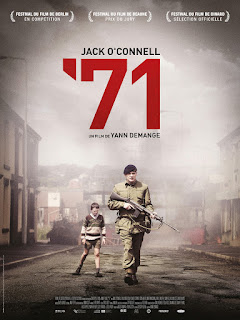 '71, in general, is pretty damn great. I was expecting something a bit more sentimental, a bit less hard hitting, but Yann Demange keeps his film so that it is always saying what he means it to say, and he outlines the army's lack of care for its footsoldiers. It's a tough little movie, despite what might seem to be a sentimental idea behind it. What's even better is that the film has enough reversals – it's full of them, in fact – that it kept me on my toes for most of its runtime. It's also unsparingly violent and politically smart.

I've had this movie on top of my DVD player for a month and a half, easily, and I've just now gotten round to watching it. I wasn't expecting much, but it constantly surprised me, and I was absolutely sold by the time we got to act three. Jack O'Connell, too, really ought to be an actor we're all watching. He is a really fascinating performer.

One gripe: Demange adds two extra endings onto the first ending of his film – not sure why he did this, unless he was trying to convince me that I actually was watching War Horse again – but I think we can expect his work only to get better and tougher.
Posted by Aaron C. Thomas at 1:01 PM