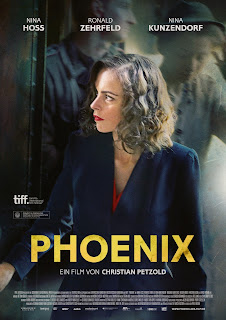 I wanted Phoenix to have more tension in it. It was supposed to be a suspense film, but as it was, it just didn't feel like much of one. I was really invested in the characters, but I was never quite sure what the stakes were. Perhaps it is unfair to say so, but I liked Petzold's prior film Barbara so much better.
Posted by Aaron C. Thomas at 10:59 PM