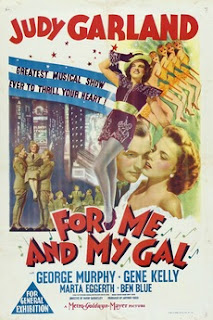 For Me and My Gal is a fun romantic comedy with Judy Garland and Gene Kelly.

...And then it takes this very serious turn and becomes a war propaganda film. I sort of knew it would be, I guess. Any musical (jukebox or original) from 1942 is bound to be designed just to sell war bonds and sell the war, but this one sort of surprised me, mostly because it really is a strange turn for the film. This is a Busby Berkeley film, but not a Busby Berkeley film.

Oh, I think it is worth saying that Judy Garland and George Murphy are acting the hell out of this movie, and give actually deeply moving performances. For a nonsense Busby Berkeley war propaganda movie, it's quite astonishing. Their work is great.

The movie, on the other hand, is just a bit of jukebox fluff.
Posted by Aaron C. Thomas at 1:16 AM