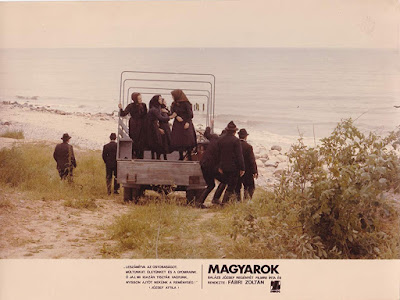 Magyarok is respectable and moving. It's one of those post-1960s nationalist films that were made all over Eastern Europe during that time (Magyarok was made in 1978 and released in the US in 1981). At first I thought this would be a kind of you-ignored-the-Nazis-at-your-peril kind of movie, but it isn't that at all. Instead it's a powerful portrait of poor farmers in a small town in Hungary and what the war machine did to them.
Posted by Aaron C. Thomas at 1:10 AM