On Chesil Beach just doesn't work. It's a little tragedy of a story, based on a novella by Ian McEwan, and I can see why this story about a tragic love affair would be deeply moving on the page. 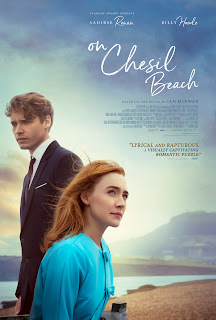 On film, however, On Chesil Beach feels clunky, as though the director isn't quite sure which moments are the important moments. Because of this, the film speeds up and slows down at times that don't quite make sense.

The movie really consists of a series of flashbacks and flash-forwards so that the entire thing relates to the film's present in ways that are mysterious and should be intriguing, but the filmmaker doesn't alert us to this convention in any real way. And so because we can never really tell if we are watching a sequence before or after the film's present, this never even really registers as a puzzle we ought to be solving. In other words, I think the film is supposed to be a bit of a puzzle – what is the before and after of this love affair and how does memory play tricks on us when we love someone? – but the film doesn't mark these shifts in a way that makes clear sense at all, and so it doesn't work.

This movie has beautiful makeup and solid acting. But the direction and the writing are poor, I'm afraid.
Posted by Aaron C. Thomas at 10:31 PM