The response to the last Atheist Stories post has been really overwhelming. Many people have emailed me and asked to be included in these posts. So: if you have an atheist testimony you'd like to share, please do so! I'd love to hear from you, and many other readers would to. Three more for this Sunday: 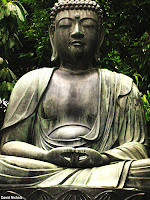 In the U.S., atheists typically don't have to explain why they don't believe in Hinduism, Islam, Buddhism, or other minority religions. Yet somehow, Christianity is seen as exceptional. Devout Christians have no problem pointing out that other religions are illogical, but are unable to see the same irrationality in Christianity. So I will focus on how I rejected Christianity.

I grew up in an Episcopalian household, and my parents are very tolerant. They never required me to believe certain beliefs (in fact my Dad didn't really go to church until later in his life). Church was just part of the routine, and I'm not sure I had a well-defined concept of God. At the time, I had a vague notion of God as a mysterious force that controlled the world. I certainly didn't believe that the Bible was the literal truth. I first began to doubt the existence of God in college (must have been all those liberal atheist professors). I suppose it started when I took a philosophy survey course. We would study various philosophers' arguments about the nature of God. One of the arguments I found very persuasive is known as the problem of evil. It takes the following form:
Therefore God does not exist. I'm not sure that I accepted at the point that God doesn't exist, but it did convince me that my concept of God had to change. My sophomore year in college, I took a course called Christian Origins. The required reading included the four canonic gospels as well as non-canonic writings of the period. We studied Christianity from a historic perspective. We read the gospels straight through, not in bits and pieces as they are read in churches. It became clear that Jesus is not portrayed in the same way in the different gospels. The biggest differences can be seen in Mark (the earliest canonic gospel) and John (the latest canonic gospel). In Mark, Jesus is portrayed as very human. There are comparatively few supernatural events or miracles in Mark and even the resurrection seems tacked on later as an epilogue. Jesus refers to himself as the Son of Man, not the Son of God. In John, Jesus is almost a superhero. It is very clear how the concept of Jesus grew over time from teacher to messiah, to the Messiah, to the Son of God, and ultimately to God himself.

I enjoyed the class so much, I began taking other religion courses. The fall of my junior year I took a class on early Judaism. As preparation in the summer I read the Old Testament. Again, I read it from beginning to end. Just as Jesus evolves in the gospels, God evolves in the Old Testament. God begins as sort of a family deity, later becoming a tribal god, and then finally the only god. In fact at first, Jews did not believe that Yahweh was the only god, just that Yahweh was the only god worth worshiping. This is known as monism or henotheism. This is what finally made it clear to me that the Judeo-Christian god was no different than other gods and I didn't believe in any of them.


Deborah
I was a very religious Christian but had left the faith due to inconsistencies with what the church taught and what was actually going on. I had also become a theater major at Cal Poly which opened me up so many different ideas and new ways of thinking. Returning to Christianity was like returning to closed mindedness and ignorance. I just couldn’t. But I didn’t want to deny the possibility that God was real at the risk of eternal damnation. At that point I became an agnostic. It was like sitting on the fence, not willing to explore either side.

I officially considered myself an atheist while watching a news clip right after the Hurricane Katrina/broken levees disaster. A reporter, maybe Anderson Cooper, came upon a bloated body face down in the streets of New Orleans, wondered why she didn’t even have the dignity of being covered up, and said something to effect that this has happened in the streets in the U.S. I realized at that moment that I was giving up on God. I know worse things have happened in other parts of the world (genocide, starvation, female circumcision, 9-year old brides, mass rapes, etc) but the U.S. is touted as blessed by God. If that’s how He treats his supposed beloved country and its people, then I’d rather live in a world without Him. That event also changed me politically and awakened my social consciousness.

What solidified it was stupidly friending a person I knew when I was a born-again Christian. He made comments on my status about his faith, and I told him I was an atheist. He saw it, like most dogmatic believers do, as an opportunity to bring me back to the faith. I told him I didn’t believe because I thought God was a dick and nothing like the Bible or His people claimed. He ended up defriending me the same day. What was actually accomplished was a realization that I call myself an atheist but have no idea how to talk about it. How do you talk about not believing in God? What does that mean to me?

It means that I believe in a natural world. I am lousy at having faith in things with no evidence. I have no absolute proof that God does or does not exist, but in all scenarios I’ve conceived and that have been presented to me, I’m gonna go with a big no on the existence of a non-verifiable supernatural being. It also means that this world is all we have, so we better try to make it better. I hate the way people put religious ideology before human beings. I hate the way it closes people off. I hate the way they make me feel like a slut because I have big boobs and love to fuck men. I’m also genuinely at peace and satisfied with the thought of there being nothing more than this amazing, complex, mysterious and interesting universe and everything it contains. What could God offer that could replace that?


Danny
The moment I first stuck my penis in a vagina I thought Someone doesn't want me to do this?! Fuck that guy!
Posted by Aaron C. Thomas at 10:33 PM