While Wes Anderson's last film, which I loved, was definitely a movie for children, his new film Moonrise Kingdom, is a film that is about children. Moonrise has really got me thinking more about all of Anderson's output as films about childhood.

(This is sort of a duh moment for me, actually.

Of course they are all films about childhood.) 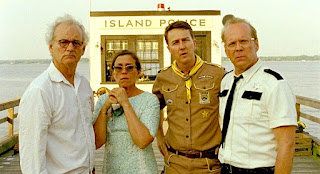 At any rate, Moonrise has some of the usual suspects in the Wes Anderson universe and some new faces, as well. Bruce Willis is excellent. Edward Norton is better than I've seen him in a long time as an ineffectual and rather depressed boy scout leader, and Tilda Swinton plays it completely straight (and typically intense) as a social services worker who goes by the name "Social Services" for the entirety of the film.

It's a very funny movie, of course, and quirky in the standard (but completely endearing) Wes Anderson way. I enjoyed the whole thing. The film has a kind of omniscient narrator who is in the film and played hilariously by Bob Balaban. It's all charming and quirky and overly clever, but it also – and this is the surprising part – avoids treating childhood in a whimsical or nostalgic way. Anderson's kids are occasionally violent; they are complicated and mysterious, and they make decisions through circuitous trains of thought. One of the things I really loved about the movie is that it treats children neither as miniature adults nor as uncomplicated heroes (I'm thinking particularly of the films of David Yates).

And then there's the music. Music is always noticeable in Anderson's movies, and Moonrise Kingdom is no exception. The film opens with Benjamin Britten's "The Young Person's Guide to the Orchestra", and ends with a kind of Young Person's Guide to Alexandre Desplat's Score. Britten recurs and important places in the movie's narrative, as well. Anderson has some of the characters perform in Britten's opera Noye's Fludde, and because the plot is about young love, the two-by-two idea of Noah's Ark resonates nicely, and then... the film also includes its own flood. The whole thing fits together beautifully.