I have thought for a long time that belief in a god and belief in extraterrestrial life forms were similar phenomena.

I was obsessed with watching The X-Files as a teenager and one thing that struck me about Mulder's total belief in extraterrestrial life was that it was akin to – in fact, Mulder stressed its identity with – faith considered much more broadly. Mulder had faith that he would see his sister again, that aliens existed, that his conspiracy theories were correct. In any case, a belief in something that no one else believes makes certain demands upon a subject: faith demands a kind of willful labor, where one actively rejects or at any rate suspends the beliefs and convictions of others in order to pursue one's own course. 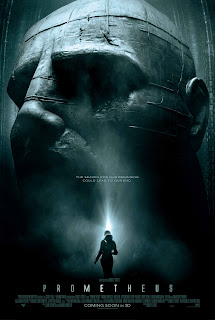 In many ways, Ridley Scott's Prometheus manages to conflate this belief in aliens and belief in god. For many of the characters in Scott's film, belief in aliens is identical to belief in god because these characters believe that beings who are not human created humanity and somehow communed with humanity until some great fall of some kind when humanity fell out of favor with these creator-aliens.

I have noticed that a number of my friends were disappointed with Prometheus. And there are, I might point out, numerous reasons to be disappointed with it: its cliché plotting, its at times downright awful dialogue, its shallow characterizations, its far-too-numerous but never-surprising plot twists.

But, well, maybe it's because I don't see a lot of relatively well-made movies like this anymore (too much Michael Bay), or maybe it's because Prometheus is much smarter than most movies made in this style – even if you disliked the movie, you will have to admit that the film demands that you do a lot of thinking while you are watching it – or maybe it's because I am fascinated by the enormous (indeed almost overwhelming) amount of rape-imagery in the film, but I rather liked Prometheus. And I mean this in a kind of Mission: Impossible – Ghost Protocol kind of way. My expectations were not very high, and I found the film enjoyable.

As for all of this talk of aliens and gods and faith. It is here where the film lost me. Forced caesarians performed to remove alien bodies from the abdomens of human women: now that's fascinating. Meditations on the origins of humanity and why our "creator" has abandoned us: no thanks. I know this matters to a lot of people and many are curious about this subject – people spend their lives studying this subject. I sympathize, and anyway people ought to be free to spend their time as they wish. But I honestly don't understand these questions. They don't resonate with me.

So for me, Prometheus stops being smart as soon as we start asking why our creator abandoned us. The important questions for me in the film are: Why does this android want me to gestate an alien life form? Why would this non-human biped go to sleep for thousands of years inside of a ship on a planet far removed from the humans it spawned? How does this bizarre alien life form work to evolve so quickly? What is that black slime in the urns? Why are the urns laid out in weird rows? What's with the giant metallic humanoid face? These questions are interesting to me. Why did daddy stop loving me? is not.
Posted by Aaron C. Thomas at 2:09 PM