Last night's film was Nikolaj Arcel's A Royal Affair (in Danish – En Kongelig Affære) which stars Mads Mikkelsen (who you might recognize as the villain Le Chiffre from the Bond-movie Casino Royale, but who is much more important as the brother Jacob in Susanne Bier's After the Wedding). 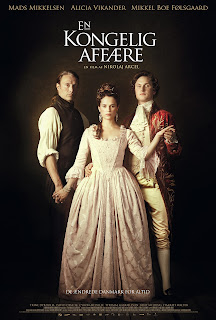 A Royal Affair also stars Alicia Vikander and (in an amazing performance) Mikkel Boe Følsgaard as Denmark's King Christian VII. Arcel's film is a beautiful costume-piece, a historical epic about 18th-century Denmark and the country's movement towards the Enlightenment, greater freedoms for its citizenry, and the end of serfdom.

The film's main character is the Christian's queen Caroline, who was an English royal, sent to Denmark as the King's bride. The King, as it turns out, is either insane or incredibly moody, and the Queen's life is decidedly unhappy.

Mikkelsen plays an avid reader of Voltaire and Rousseau who is also a surgeon. He becomes, through a series of intrigues, Christian's personal physician, and comes to the palace in Copenhagen to live. Drama ensues as the Queen and the doctor begin to fall in love and the King becomes more and more ill. The Enlightenment, of course, also has its enemies, and even if the two were not in love, they would have been targeted by other forces among the nobility and the church. The stakes are quite high, indeed.

Arcel films this story like one of the French historical epics from the 1980s – something like Bruno Nuytten's Camille Claudel or Patrice Chéreau's La Reine Margot or one of the Jean-Paul Rappeneau historical epics (films like The Horseman on the Roof or Cyrano de Bergerac). A Royal Affair is much better made than a film like Jean-Marc Vallée's The Young Victoria.

Denmark has not, of late, selected films like this as its submission for the Foreign Language Film Oscar, but this may be the year, depending on how good this year's Susanne Bier movie is. (We find out tomorrow, September 18th, in any case.)

I found A Royal Affair quite moving. Its subjects are fascinating, its costumes are gorgeous (I cannot imagine it not getting an Oscar nomination for this. I mean, if Anonymous can get one...), and the acting is wonderful. I was a fan.
Posted by Aaron C. Thomas at 7:52 PM