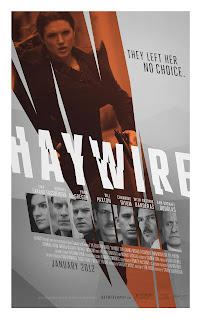 Haywire is an extended experiment in using Dogme-95 lighting for an action movie. This makes the movie strange to watch at times: the look of the film keeps changing as the film constantly changes location – bright sunlight for snowy, upstate New York; lamplight for a Dublin hotel room; ugly flourescence for Washington DC offices; crepuscular sunset on a beach in Veracruz. The effect is "realistic" but it makes the film feel disjointed and rather haphazard.

The plotting, too, is disjointed. For me this was due to the slow-motion, Guy-Ritchie-inspired way that the film's second sequence (the expositional "Barcelona" sequence) is edited. Again, this section of the film doesn't match up with the rest of Haywire, and it downshifted the film's speed before it even started going. Strange.

Haywire's not bad at all, really, and could actually have been kind of fun 1) if it hadn't been rated PG-13 – who on Earth wants to watch a movie about gun-violence and mixed martial arts if it's gonna be a bloodless, cartoon version of gun-violence and mixed martial arts? – and 2) if the folks at Relativity Media hadn't given away the entirety of the plot in the trailer.