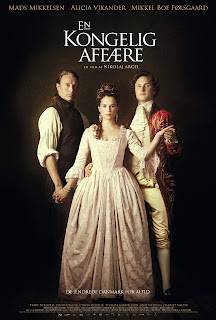 A Royal Affair
1 Nomination
Director: Nikolaj Arcel
Cast: Mads Mikkelsen, Alicia Vikander, Mikkel Boe Følsgaard, David Dencik, Trine Dyrholm, Harriet Walter, Cyron Melville, Charlotte Rampling
An intriguing and opulent political thriller involving madness, a ridiculous amount of prostitution, and the writings of Voltaire. This is the kind of movie that Patrice Chéreau or Régis Wargnier used to make – the type of movie that used to do really well in this category and usually starred Isabelle Adjani or Gérard Depardieu and occasionally both of them. A Royal Affair's attractiveness is also due to its excellent acting talent. Its lead actor is international film star Mads Mikkelsen, and the other lead roles are played by Alicia Vikander (who was in Joe Wright's Anna Karenina this year) and Mikkel Boe Følsgaard, whose performance I've praised here and here. The acting is excellent, the plot is fascinating, and the location is sumptuous. All of this is quite a winning combination – not for Oscar, mind you, but you will enjoy the film if you rent it. Competition in this category is way too steep for Denmark to win again so soon.
Will Win: N/A
Could Win: N/A
My Rating: #24 out of 64 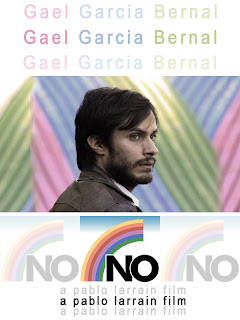 No
1 Nomination
Director: Pablo Larraín
Cast: Gabriel García Bernal, Antonia Zegers, Alfredo Castro, Néstor Cantillana, Jaime Vadell, Marcial Tagle, Luis Gnecco
A very funny political thriller about the plebiscite in Chile in 1988, this film also stars an internationally known acting talent, Mexican star Gabriel García Bernal. Pablo Larraín's movie is the first film submitted by Chile ever to be nominated for the Best Foreign Language Film Oscar. The whole thing is quite a coup. But No is a bit of a difficult film, an artistic experiment in returning to 1980s-style filmmaking that many viewers might find irritating. In any case, Chile, I am sure, is simply happy to be invited to the party. I found this film to be a fascinating perspective on an important historical period in South American history. That it is also quite a funny film is a testament to Larraín's considerable filmmaking skill.
Will Win: N/A
Could Win: N/A
My Rating: Not ranked – 2013 Release 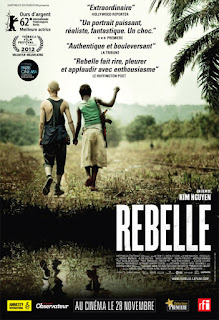 War Witch
1 Nomination
Director: Kim Nguyen
Cast: Rachel Mwanza,Serge Kanyinda, Ralph Prosper, Alain Lino Mic Eli Bastien, Mizinga Mwinga, Diana Uwamahoro
This movie is excellent and is also about an important international phenomenon – the use of child soldiers in warfare. War Witch is Canada's third nomination in this category in as many years: they have clearly hit upon a winning formula for choosing films that will be selected by the Academy. And this one is the best of their selections since Deepa Mehta's Water. War Witch is deeply moving, beautifully filmed, and also incredibly theatrical, using storytelling techniques that reminded me of Alejandro González Iñárritu's superb Biutiful. Kim Nguyen's film is not uplifting or about "the indomitable nature of the human spirit" or anything like that. Instead, it's simply good storytelling about inhuman violence.