I've been told by Dayne that this is "a very drunk post", and I did write it after drinking half a bottle of rosé, so be forewarned.

Here's the thing: when you title your film Lone Survivor and you show the audience who that survivor is in the film's first five minutes, it becomes difficult to maintain the tension a survival film needs. 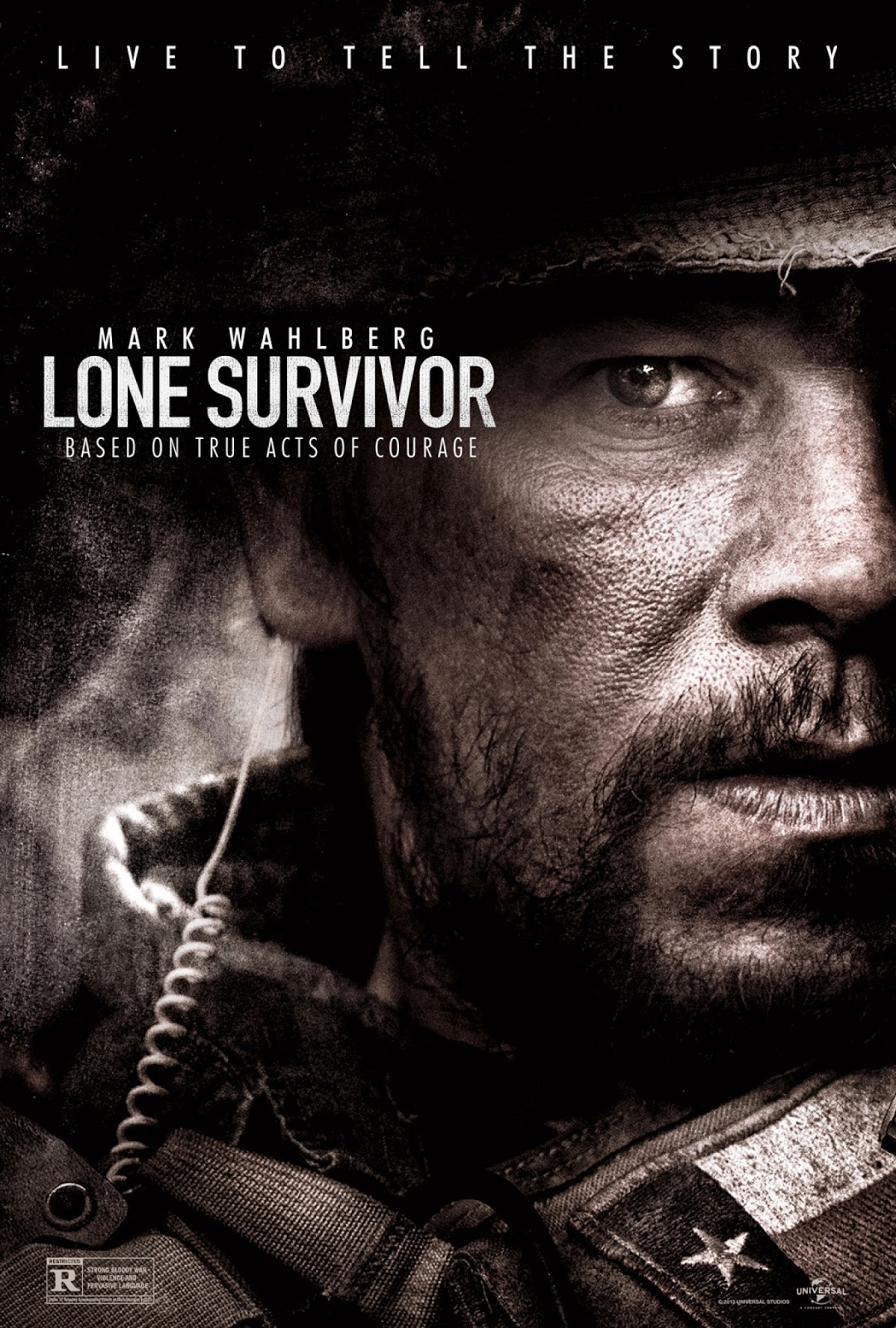 As far as I am concerned, Peter Berg was in trouble as soon as we started. If I was invested in the four men who go on this mission to kill a random dude (and I was invested in them), I also knew – again, from the film's first few minutes – that they were all going to die except for the, ahem, lone survivor, played by Mark Wahlberg.

I'm actually sort of baffled by the way this film was made, because it really is a high-quality thing for much of its running time. The sound is awesome. The makeup is awesome. The photography is top-notch. The acting is great (I love me some Mark Wahlberg, as you probably know I see everything he does, and I absolutely fucking adore Ben Foster – who is as fantastic in this as he is in everything else). Better yet, this could've been a pretty great survival movie. And who doesn't love a survival movie? Deliverance is very good, but 2012's totally fantastic The Grey by Joe Carnahan is totally worth your time.

Lone Survivor just isn't that, though. Instead it is a picture about four guys who go out to kill some random Arabs about whom we know absolutely nothing. So they go off to do this and then people start shooting at them and stuff. And, well, I sort of understood why people were shooting at them. And I still don't know what we're doing in Afghanistan. And the word Taliban is used a lot, but I am not really sure what that means anymore, and in the context of Lone Survivor it only means "bad".

This isn't to say that I didn't like these guys. They were great guys – funny, charming, interesting. I'd probably have a great time having a beer with any of them. But their deaths were inevitable from the film's first frame, and the deaths of the dozens and dozens of Afghanis also seemed inevitable.

I find all of this killing troubling, as you might imagine, but I also find it troubling that the film is fundamentally not interested in interrogating questions about who deserves to live and who deserves to die. There is a long-ish Deliverance-inspired conversation at the beginning of act two about precisely this question, but the arguments never even reach the level of intelligence of Burt Reynolds' monologue in Boorman's film. We remain well entrenched in clichés. And the possibility of being on CNN as the next Lynndie England is more important to these men than moral obligations or ethical decisions.

I was not unmoved by Lone Survivor. Ben Foster, when he dies, talks about his wife and brotherhood and the Navy, and I really responded to that. But Lone Survivor wears out its welcome. It's twenty minutes too long, and it never manages to justify all of the killing it puts on display. As for the lone survivor himself, he's intense and never boring to watch as a performer. The film he's in, however, had me checking my watch. When do we get to the end – which, I may remind you, we've already seen at the film's opening?

Are we there yet?


I forgot to say, too, that I was just stunned by the amount of U.S. military firepower that is mobilized at the end of the film. This is something that Lone Survivor has in common with Captain Phillips. In both films, it is as if the U.S. military is a kind of sleeping giant that doesn't enact its full power unless truly angered. In other words, instead of U.S. military tactics subtending the entire action of these films, both Lone Survivor and Captain Phillips behave as though USAmerican agents act on their own (in Phillips, an unarmed naval crew, in Survivor a heavily armed but isolated foursome) and are not actually supported, trained, funded, protected, and armed by the U.S. military. But once the men get into trouble in both films, the (apparently) full might of the United States descends onto the small number of men who have dared to test this sleeping giant. In both films, the military acts as a kind of exercitus ex machina, triumphantly, impossibly, and with unimaginable power, sweeping in and saving the day.

But this is all a trick – a trick of narrative that serves a specific ideological function. The U.S. military has caused everything in Lone Survivor. The men get sent onto this mountain as a military directive. They get abandoned on the mountain because the military is stretched too thin in Afghanistan. They are there, in fact, to kill the man who then fights back and attempts to kill them. And then when the Navy's four foot-soldiers do not succeed in killing the two men that it has all-along planned to kill, the Navy sends in a large number of helicopters and guns down everyone in sight. Why it didn't do this in the first place and why it allowed all of the soldiers who died to die is the Navy's business, of course, but the film pretends as though it isn't. Lone Survivor pretends that all along the four SEALs are fighting against an army much bigger than them. With its army-from-the-machine narrative device, however, Lone Survivor exposes the lie at its center: all of these deaths – the three SEALs, the rescue troupe, the Afghan fighters – have been, if not carefully, at least deliberately, orchestrated by U.S. military policy in Afghanistan.
Posted by Aaron C. Thomas at 2:21 AM