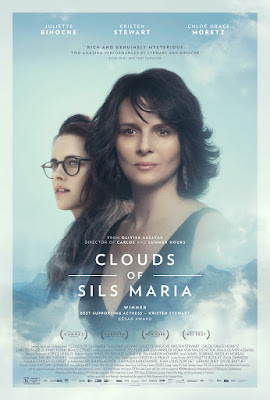 Rich, complex, Chekhovian, and very sexy. Talkier than other Assayas movies, but Clouds of Sils Marie deals with the problem at its center through circumlocution, spinning around and around it, talking about it, certainly, but then, as it turns out, the important stuff is never what is said.

Clouds is all about desire, and the clouds at the film's center (or are they at the film's peripheries?) are a perfect metaphor for the desire(s) the film attempts to describe in roundabout, impossible ways. These eponymous clouds are known for a phenomenon where they come down through a mountain pass and shape themselves into the form of a snake, coalescing for a very brief moment before going off on their own and becoming simply clouds again.

Clouds of Sils Maria is also, in many ways, an All about Eve for 2015, discussing our desire to live other people's lives, the difficulties of embodying the lives of others, and the ways that other people's lives can take over our own, both by eclipsing them and through sheer force of the other person's will.

The acting is flat out superb. Juliette Binoche knocks it out of the park yet again, and Kristen Stewart is flawless. I was really into this picture.
Posted by Aaron C. Thomas at 12:07 AM