I am sure Aronofsky thinks that Mother! is some sort of meaningful, fascinating allegory. But it isn't. Jennifer Lawrence's range is, as usual, limited, to say the least. She unsurprisingly scowls through the picture, and thus is, I suppose, the perfect star for the outrageous cynicism, awkwardness, and displeasure that characterize Mother! itself. 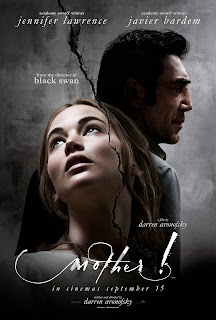 And if the plot itself is incoherent – which it is – this incoherence is made uncomfortable, unbearable, unwatchable by the fact that one has no character with whom one can identify and no one for whom one might wish to root. Aronofsky actively dislikes his own main character, and quite possibly dislikes his antagonist even more. This is a sadistic, painful movie that is actually invested in punishing its audience and violating its protagonist.

The structure of Mother! (what is that exclamation point about?) is such that we are angry and have hit a breaking point a full sixty minutes before our protagonist hits her own breaking point. This leaves us an entire hour in which we as an audience are frustrated enough to scream, but our heroine is not. We actively wait for her to lose her shit and let everyone have it – or for her to do anything at all! (Exclamation point.) But we wait the entire movie for this to happen. It will take the full two hours.

Michelle Pfeiffer is good in this, though, in her Hebraic Eve drag. I will say that. And I am certain this is because she is really the only actor who is having any fun here. Bardem plays a sadistic asshole but doesn't seem to relish this part at all, opting instead for a baseline of sincerity with small bursts of uncontrollable rage (an odd thing for an actor who has played fiendish, pleasurable villains.) Pfeiffer, on the other hand, opts for taking pleasure in sadism, annoying our protagonist and trying to get a rise out of her in whatever way she can. It's a pleasure to watch, and one of the only pleasures Mother! can actually boast.

Domnhall Gleeson, on the other hand, is wasted in this movie. He is great, as always, but woefully underused.

And as for Kristen Wiig, there's a problem here. She represents, in fact, a real casting error. Wiig is hilarious. And we can't take her seriously in a part – we are trained to laugh at the things she says. So when she shows up in act three and is supposed to be terrifying? All I could do was giggle.

It might not be her fault completely. To be fair to Wiig, I had already started laughing at this movie by the time we got to act two. It's too silly not to laugh at it. This is an absurdist exercise in sadism and allegory. Be smart and skip it. This is the same guy (with an utter contempt for humanity) who directed Noah, and we all skipped that one (or wish we did). Do yourself a favor and skip this one too.

Addendum: If you want to read my sincere critique of the politics of Mother!, please follow the link to my Noah discussion. As it turns out, Mother! is just Noah in a new CGI outfit. What my friend Rick and I discuss about Noah is that Aronofsky really believes that a) human beings deserve to be punished for their total depravity, that b) there is a god, and that c) that (apparently male) god is actually a terrible force of mostly petty evil. Now, I have nothing per se against a film without hope or a film with a cynical view of human beings. But Aronofsky's two most recent films posit that human beings ought to be destroyed, that human culture is without redeeming qualities, and that the god ought just to scrap the whole experiment.

I find this frustrating for numerous reasons. In the first place, there is not actually a god. In the second place, what does Aronofsky want us to do with his allegory? Ask mom how we can help? In his film, the one character (Jovan Adepo) who actually tries to help JLaw, is treated like just as much of an interloper as Aronofsky's ciphers for Cain and Abel. As far as I can see, Aronofsky has no empathy whatever for any member of humanity, so aside from finding his film boring, I find his politics bankrupt.
Posted by Aaron C. Thomas at 1:09 AM