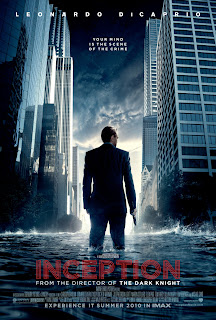 · Best Visual Effects
Director: Nolan
Cast: Leonardo DiCaprio, Joseph Gordon-Levitt, Marion Cotillard, Tom Hardy, Cillian Murphy, Ellen Page, Ken Watanabe, Dileep Rao, Tom Berenger, Pete Postlethwaite, Michael Caine, Lukas Haas
The crowd favorite. That Nolan did not get a Best Director nomination is widely perceived as a snub, which it is. One of these days, Nolan is going to make a movie that the Academy really loves — Fincher should be his model, actually. But he will just have to settle instead for making tons of money. I actually found Inception kind of soulless. I mean, it's an exciting, complicated picture, but I found it difficult to emotionally drop in.
Will Win: Art Direction, Sound Editing, Sound Mixing, Visual Effects
Might Also Win: Original Score, Original Screenplay, Cinematography
My Rating: #9 out of 40 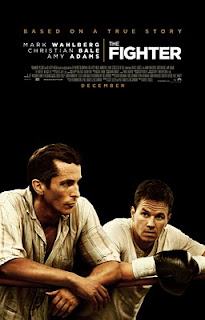 THE FIGHTER
7 Nominations:
· Best Picture
· Best Director: David O. Russell
· Best Original Screenplay: Keith Dorrington, Eric Johnson, Scott Silver, Paul Tamasy
· Best Supporting Actor: Christian Bale
· Best Supporting Actress: Melissa Leo (Frozen River)
· Best Supporting Actress: Amy Adams (Junebug, Doubt)
· Best Editing: Pamela Martin
Director: Russell
Cast: Mark Wahlberg, Bale, Leo, Adams, Jack McGee
Not sure why everyone loves this movie as much as they do; it struck me as more of a standard boxing picture. Anyway, this is an actor's movie and no one should forget that. As you look above at the nominations you see none for art direction, cinematography, or sound, though all were rather excellent for the film. My point is that those things were not why people loved this movie. They loved the film for its acting, and its three nominations (as many as The King's Speech!) are a testimony to that. Oh yeah, and it's going to win them, too.
Will Win: Supporting Actor, Supporting Actress (Leo)
Might Win: N/A
My Rating: #27 out of 41 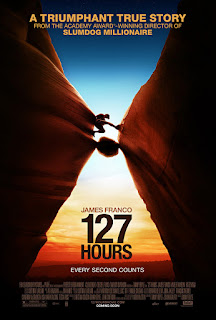 127 HOURS
6 Nominations:
· Best Picture
· Best Adapted Screenplay: Simon Beaufoy (The Full Monty, Slumdog Millionaire) & Danny Boyle
· Best Actor: James Franco
· Best Editing: Jon Harris
· Best Original Score: A.R. Rahman (Slumdog)
· Best Original Song: Rahman (Slumdog x2), Dido, Rollo Armstrong
Director: Danny Boyle
Cast: Franco, Kate Mara, Amber Tamblyn, Treat Williams
I loved this film and I can't help thinking it got a bit snubbed when the nominations came out. It obviously deserves its editing nomination, sure, but where is the cinematography nod? sound editing? I guess I shouldn't complain too much, the Academy clearly liked the film: six nominations is nothing to sneeze at. And as much as I loved the movie, I am not expecting it to win anything on February 27th. Still, everyone should see this flick. It is Danny Boyle at his best.
Will Win: N/A
Might Win: Original Score, Original Song, Editing
My Rating: #5 out of 41
Posted by Aaron C. Thomas at 11:23 AM