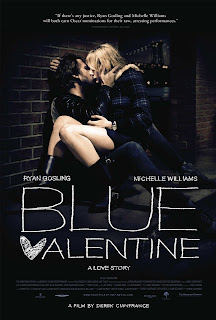 1 Nomination:
· Best Actress: Michelle Williams (Brokeback Mountain)
Director: Derek Cianfrance
Cast: Ryan Gosling, Williams, Faith Wladkya, John Doman, Mike Vogel, Carey Westbrook, Ben Shenkman
I liked this movie, I think, and both of the girls I saw it with liked it a lot. It is well made and emotionally affecting, sure, but... well. This is what I'll say about it: I wanted to root for their relationship, and because of the Cianfrance's management of time in the film, we all know that their marriage is not working out from the very beginning of the movie. This made it difficult for me to cheer their relationship on. I think this makes sense; I wasn't able to emotionally commit to their relationship because I was already aware that it wasn't going to end like Valentine's Day, and so – I think because of my own self-protective instincts – I didn't. The acting is great all around, and, as I said, the filmmaking is excellent. 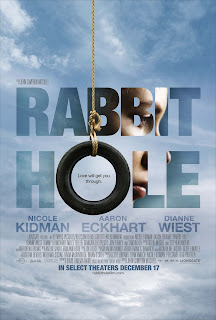 RABBIT HOLE
1 Nomination:
· Best Actress: Nicole Kidman (Moulin Rouge!, The Hours)
Director: John Cameron Mitchell
Cast: Kidman, Aaron Eckhart, Miles Teller, Dianne Wiest, Sandra Oh, Jon Tenney, Giancarlo Esposito
I am a little surprised that Kidman made this cut. I feel like this doesn't usually happen when the actor in question already has an Oscar and the Academy doesn't really like the film. I was not planning on seeing this movie, I have to admit, just because I find the Tony- and Pulitzer-prize- winning play on which it is based a little... well... boring. On the other hand, the film is by John Cameron Mitchell, who has only ever directed excellent films. There are two: Hedwig and the Angry Inch and Shortbus. Both are genius.

Will Win: N/A
Might Win: N/A
My Rating: Not Yet Rated 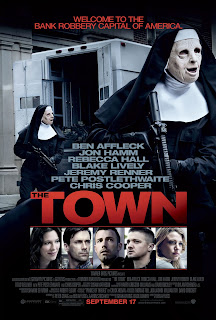 THE TOWN
1 Nomination:
· Best Supporting Actor: Jeremy Renner (The Hurt Locker)
Director: Ben Affleck
Cast: Affleck, Renner, Rebecca Hall, Jon Hamm, Blake Lively, Slaine, Pete Postlethwaite,Chris Cooper.
I really liked this film – I remember being only so-so on Affleck's last film. In this one, the acting is excellent, and the script is rather surprising, but the best thing is the tension in it. There are two very well made car chases (see Salt for how to make a boring one) and three separate heist sequences. If I want anything out of a heist movie it's more heists and more car chases. Bring them on. Also, they wear nun masks to one of the bank robberies. That shit is scary. I highly recommend this; it is one of my favorites for the year.