Queen of Cannes as Queen of the Desert

Queen of the Desert is, perhaps, an interesting true story, if indeed it is true. 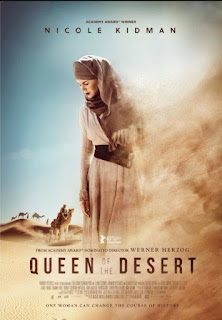 Gertrude Bell travels to the near East where she befriends and learns about the Bedouins and becomes a British agent who eventually divides up Lebanon, Iraq, and Saudi Arabia.

Nicole Kidman is in full period-piece diva mode here. And she is fine in this tepid film. Robert Pattinson works very well as T.E. Lawrence. Oh and James Franco is in this. As Kidman's first love. I actually had forgotten he was in this – the film sort of forgets about him as we move along – and I saw this movie two months ago.

The problem is that if the true story of Gertrude Bell is interesting, and it very well might be, Werner Herzog's film isn't very interesting (Werner Herzog made this film??). It's more like a rather dull historical pageant flavored with two love stories to spice it up a bit.
Posted by Aaron C. Thomas at 11:44 PM