This Won Best Drama at the Golden Globes, But...

I have to say I quite liked Three Billboards outside Ebbing, Missouri. And I think I liked it for an odd couple of reasons. What I mean is that the reasons that I was into the movie now feel sort of odd to me since it is getting so many accolades... and also now getting trashed by other folks. (Trashing a Best Picture winner is called backlash, of course, and all movies that move into the frontrunner position get trashed, so this is to be expected.) 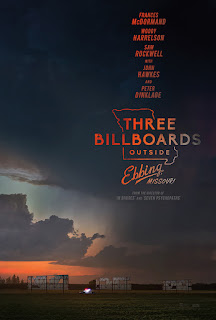 The thing is, I don't like Martin McDonagh's work. (Or his brother's work, if I'm honest.) And I should like it, right? I mean, theatre people love Martin McDonagh, especially my students. They love his plays The Lieutenant of Inishmore and that one about child torture – what's that one called? – The Pillowman. My students (perpetually in their 20s) and many many other people seem to love McDonagh. And I have heard no one say a negative word about his film In Bruges, a movie that everyone seemed to love. But I find McDonagh (both McDonaghs) to be cynical and, well, ethically questionable. I find them frustrating in their treatment of violence as mostly funny. They take this amused point of view toward violence that makes it seem like getting punched in the face or falling down stairs or getting a drill pushed through a thumb is cause for laughter. I've complained about this before here (while talking about John Michael McDonagh's film Calvary) and here (while talking about 7 Psychopaths).

I love McDonagh's early play The Beauty Queen of Leenane, and his work began in the UK during a period I positively adore in the 1990s called In-Yer-Face theatre or New Brutalism – the time of Tracey Emin and the YBAs. This is a time period that is actually characterized by violence and drug use and onstage sex acts. But those plays almost always are very careful about the way they present violence. They're interested in asking the audience to think differently about the violence they're witnessing. The plays ask for a new ethics of violence or at least a rethinking of the ethics of violence to which we are accustomed. McDonagh's work doesn't do that (as far as I can tell).

Ok. But. I actually thought that Three Billboards sort of grabbed ahold of this and made it work. The film is an odd amalgam of violent images, cheap sentiment, and real ethical quandaries. And to my mind it worked much better than most McDonagh – including In Bruges and 7 Psychopaths – and it asked me to think about some interesting things.

The plot of Three Billboards is that a woman whose daughter has been raped and murdered and then burned until she is unrecognizable decides that the police haven't been doing anything, and so she needs to do something herself. She rents three billboards that call out the sheriff by name and then ask why he hasn't arrested anyone yet. It's an outstanding political move, but it quickly makes her an enemy of the people, as folks in Ebbing, Missouri side with the sheriff, begin to feel sorry for him, accuse this woman of hating the police, etc. People get distracted. They terrorize her; they shun her kid at school; they try destroy the billboards. The billboards rightly call out law enforcement for not having done their jobs, but people are more interested in accusing the woman of hating the police.

All I could think of for the entire movie was the Colin Kaepernick protests about the deaths of black men at the hands of police in the United States. Kaepernick kneels. He asks us to do something about the police killing unarmed black men. He attempts to call attention to something that is a real problem in the United States, a problem that has real, life-and-death consequences. ... And then all people want to talk about is the way he "disrespects" the United States flag. Right? Like, it is so difficult to talk about the issue of police killing unarmed black men and boys that we can't bear to talk about it, so instead we shift the discussion to "respect" for the stars and stripes. And I hear people say Well, he should have protested a different way, and all I can think is Well, we should stop supporting police who kill people, but I guess some folks think one problem is more important than the other. 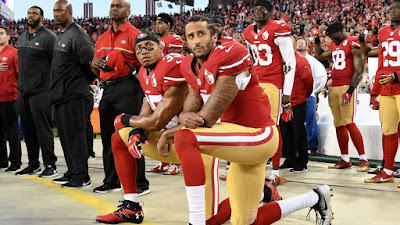 This is how I understood the entirety of Three Billboards: as a lengthy meditation on Kaepernick and the hostility shown toward him and others who decided to kneel during the U.S. national anthem. (The outrage over this actually caught me a little off guard. I really don't understand why people are/were so angry at him.) What happens in Three Billboards is that people are in such a habit of siding with police, so invested in the pretense that "law and order" is functioning well in this country, that they are willing to support police officers who torture those they incarcerate and willing to turn against those who demonstrate that law and order isn't actually working the way that it should. The people in the film hate that someone is calling bullshit on law enforcement so they attack the person who is yelling bullshit instead of attacking the problem she is attempting to describe. For me, this aspect of the film works superbly, and I loved this part of it.

I recently read a piece arguing that Three Billboards is not smart about race. I suppose I don't really disagree. The movie's use of racial slurs for comedic purposes are typically McDonagh, and if they work in the UK context, they seemed stupid to me. But the piece also (intriguingly) makes the claim that the movie didn't need to be about race in the first place, arguing that McDonagh should just have left race out of his film, since his film isn't about race.

Isn't about race? I submit that if a film is about prison or the police or the criminal justice system in the United States, then it is definitely a film about racism, even if it doesn't want to be. 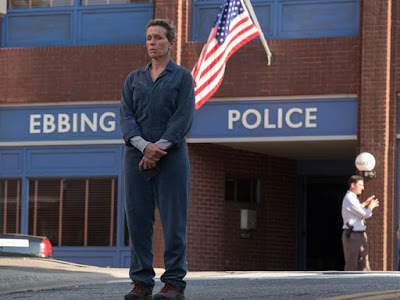 Three Billboards is an uneven film. It tries to combine sentimentality, comedy, and a clever plot. But it can't really manage this combination. It simply isn't savage enough. There are long sequences where the film asks us to feel sorry for the policemen it criticizes – not in a serious way, but in a shallow oh-it's-hard-for-them-too kind of way – and these don't work. They made me want to check my watch and return to the main storyline. And McDonagh dwells in these areas for far longer even than make narrative sense.

When we left the theatre, Alexandrew, my companion, offered that (although he hated to say it) the movie would have been directed better by Tarantino. I have to (but not as reluctantly as Alex) agree. McDonagh wants to have sentimentality and brutality and comedy. We are supposed to say awwww when Frances McDormand doesn't want to have sex with Peter Dinklage, when Woody Harrelson writes a sappy letter to his wife, when we learn more about Sam Rockwell. But all of this sentimentality is awkward. It gets in the way of the film's real social analysis. It moves the film into cheap territory and away from the real thinking that I think Three Billboards had the potential to inspire.
Posted by Aaron C. Thomas at 9:20 AM